Biden's picks out to soften Congress 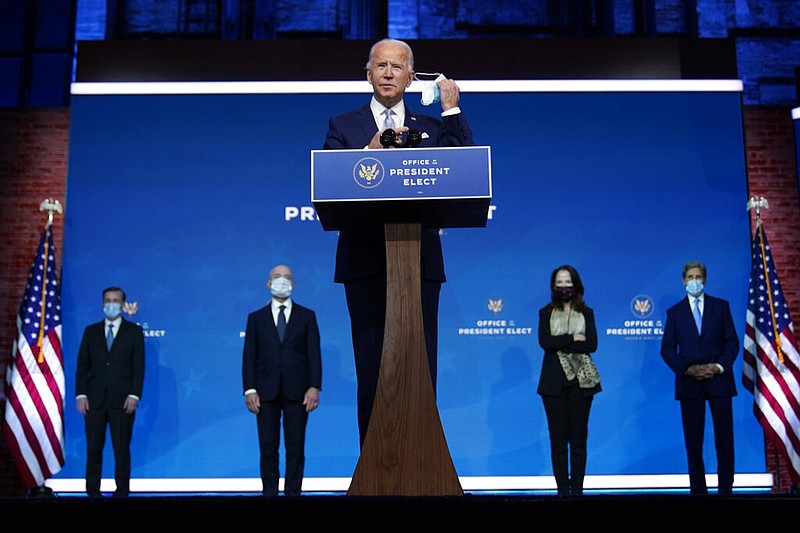 President-elect Joe Biden removes his face mask as he arrives to introduce his nominees and appointees to key national security and foreign policy posts at The Queen theater in Wilmington, Del., on Tuesday, Nov. 24, 2020.

Taken all together, Biden's appointees have held more than 100 Zoom meetings with lawmakers, both Democrats and Republicans, in the past week alone.

This multifaceted charm offensive reflects the transition team's attempts to smooth the tough confirmation landscape the nominees will soon face in the Senate, a potentially hostile environment exacerbated by a narrow partisan divide and ongoing bitterness from President Donald Trump's era, with some Republicans still questioning Biden's win.

That makes the confirmation battles, set to start well before Inauguration Day, the first real testing ground for the Biden administration. They will show if Biden can win over Senate Republicans, if Majority Leader Mitch McConnell, R-Ky., can stymie Biden, and if individual senators, especially Republicans hoping to run for president in 2024, can attract a following by vocally attacking Biden's efforts.

Critical and potentially controversial picks are still expected in coming days, including for attorney general and CIA director. The Biden team's courtship, meanwhile, is complicated by the covid-19 pandemic, as casual drop-bys in senators' offices are replaced by far less intimate Zoom introductions and virtual roundtables. But the Biden transition team sees no alternative.

"We will have more of that in the coming weeks," said Biden spokeswoman Jen Psaki. "It's important for us to have the nominees and team out there as much as possible so the American people can get to know them even in advance of their confirmations."

Some of Biden's picks have quickly attracted resistance, and not just from the right. Some Democrats worry that Lloyd Austin's recent military career makes him an unsuitable pick for defense secretary. Republicans are protesting Neera Tanden, Biden's choice as budget director, because of previous tweets slamming GOP politicians. Tom Vilsack, in line to reprise his role as agriculture secretary, faces objections from Black leaders and liberal activists who want a new direction for that department.

And some confirmations could hinge on which party controls the Senate, which will become clear only after the results are finalized in Georgia's two Senate runoffs on Jan. 5.

Given the crises wracking the country, Biden's aides say it's vital that they have key Cabinet secretaries in place on Inauguration Day or soon after -- a feat that is not unusual but is far more difficult when the opposing party controls the Senate. Such speed may be a tall order for Republicans, many of whom have yet to acknowledge Biden's win out of loyalty to Trump, who has refused to concede and continues making claims of voter fraud.

While more Republican lawmakers are calling Biden president-elect since the Electoral College formalized his win last week, some have avoided using that title, and others suggest they will never accept Biden as the legitimate president. McConnell himself was silent for six weeks after Election Day before acknowledging Biden as the incoming president.

That could delay the scheduling of committee hearings on the nominees.

"What we're seeing now is Republican senators making it clear that, at least at this stage, they're not going to hold those hearings," said Norman Ornstein, a resident scholar at the American Enterprise Institute. "For many, to do so would acknowledge that Biden was president-elect. For others, it will create an obstacle to his getting off to a fast start."

'THE GOOD OF THE NATION'

Biden continues to insist that Republicans ultimately will work with him "for the good of the nation," especially after "Donald Trump's shadow fades away," and in recent weeks, he has embarked on a largely behind-the-scenes effort to reestablish rapport with Senate Republicans.

So have his nominees. Austin held a virtual roundtable with nearly a dozen military family organizations. When Yellen spoke with trade and advocacy groups, she was joined by her would-be deputy, Wally Adeyemo. Cecilia Rouse, Biden's pick to chair the Council of Economic Advisers, has met with Black female leaders.

Surgeon general nominee Vivek Murthy and Sen. Elizabeth Warren, D-Mass., who know each other from Boston, discussed data for a solid half-hour and ended their Zoom call by making a post-covid lunch date, according to people familiar with their meeting who spoke on the condition of anonymity to discuss a private session.

Tanden, possibly Biden's most vulnerable nominee at the moment, has met with senators including Sen. Thomas Carper, D-Del., who said afterward he was deeply moved by her childhood story of relying on public food and housing programs after her parents divorced. Carper encouraged Tanden to publicly recount that background more often.

She did so on Thursday, tweeting her memories of being the only student in her public school who used 10-cent vouchers to buy lunch, saying that experience drove her to work in public service. "Since childhood, I've understood what government can do to help struggling families get on their feet," she said.

It is far from clear that such human touches will be enough to sway GOP senators who have balked at what they call Tanden's hard-hitting partisanship. But stressing the nominees' personal stories is a central strategy of Biden's confirmation effort, especially given the president-elect's historically diverse team.

When he was announced as Biden's choice for secretary of state, Antony Blinken, for example, spoke of his stepfather being a Holocaust survivor. When Becerra was introduced, he recounted that his father was a construction worker with a sixth grade education and his mother a clerical worker who arrived from Mexico in her teens.

The Biden nominees are also reaching out to home-state Republicans. Shortly after Pete Buttigieg -- the former mayor of South Bend, Ind. -- was announced as the transportation secretary nominee, Sen. Todd Young, R-Ind., issued a statement saying that "as a former city leader here in Indiana, Pete understands how critical infrastructure is to growth and opportunity. It will be good to have a Hoosier serving in this capacity."

Psaki said that many such conversations were "already happening behind the scenes" and that the president-elect's team plans to pick up the pace after the new year.

"Once we get to January, our hope and expectation is that the dozens of meetings that have already occurred -- and the hundreds of engagements that have happened between our staff and the staff on the Hill -- will expand and lead into more and more meetings and hearings," Psaki said.

"Frankly, Democrats also exercised many more delaying tactics," said John Fortier, director of governance studies at the Bipartisan Policy Center. Democrats contend that's because so many of Trump's picks were unorthodox or unqualified.

Presidents Bill Clinton, Bush and Obama all benefited from their party's control of the Senate when they took office. Overall, the median time between nomination and a Senate vote -- or a candidate's withdrawal -- was between zero and two days for those presidents, according to a Washington Post analysis, compared with 25 for Trump.

Still, virtually every president has suffered at least one failed Cabinet pick.

And Obama's choice to lead the Department of Health and Human Services, former Sen.Tom Daschle, D-S.D., was felled by tax issues.

"In most years, there's usually a holdup or two or three," Fortier said. "Not everyone is going to make it through."

Biden, having spent more than three decades in the Senate, is well aware of the pitfalls nominees can face -- he chaired the bitter confirmation hearings for Supreme Court Justice Clarence Thomas -- and aides suggest he is factoring confirmability into some of his choices.

Many GOP leaders have praised Yellen, for example, and Katherine Tai, Biden's choice for U.S. trade representative, also has bipartisan support on Capitol Hill. Conversations about the finalists for attorney general have reportedly shifted toward likelihood of Senate confirmation.

Such considerations will be even more important if Republicans keep control of the Senate, where they currently hold a 52-48 majority. Republican Sens. David Perdue and Kelly Loeffler face runoffs in Georgia against Democratic challengers Jon Ossoff and Raphael Warnock, respectively, because no candidate received at least 50 percent of the vote on Election Day.

Even if the Democrats win both runoffs, resulting in a 50-50 Senate, Republicans would control the chamber until at least Jan. 20, when Biden is inaugurated. That's because the sitting vice president casts tie-breaking votes in the upper chamber.

That means the GOP would dictate the schedule of confirmation hearings and floor votes. "If the Republicans are still in the majority, it's quite possible that they'll slow-walk a lot of these nominations and make it extremely difficult for Biden," Ornstein said.