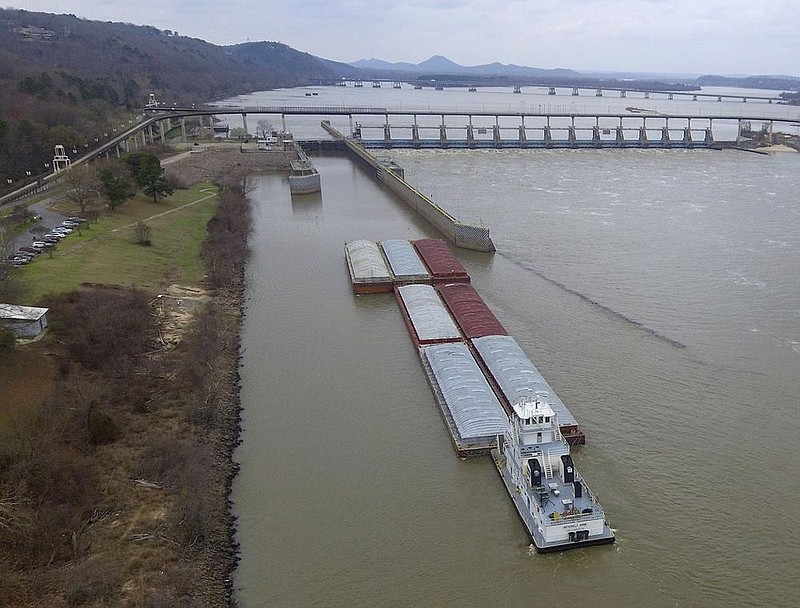 A barge makes its way up the Arkansas River into the lock at Murray Lock and Dam Monday March 2, 2020 in Little Rock. (Arkansas Democrat-Gazette/Staton Breidenthal)

The watershed -- the fourth largest in the world -- directly affects about 20 million people's drinking water, 92% of the nation's agricultural exports, 260 species of fish, 40% of the nation's migratory waterfowl and 60% of all North American birds, according to the National Park Service.

Kimberly Lutz, executive director of America's Watershed Initiative, said each region of the watershed, from Montana to Louisiana, is intertwined.

"Everything in a watershed is linked. When you have a problem in one area, you see it cropping up in another," Lutz said. "A lot of people know the river in their backyard but don't know how rivers connect to each other. You are part of this bigger system."

The 2020 overall C- grade is only a slight improvement on the D+ grade given to the watershed in 2015 by the group, which formed in 2010 to work with business, government, academic and civic organizations to find solutions to the challenges facing the Mississippi River and the more than 250 rivers that flow into it.

The watershed is divided into five basin areas, stretching across 31 U.S. states – including Arkansas – and two Canadian provinces. The Lower Mississippi River Basin and the Arkansas-Red River Basin, which meet in Arkansas, received the worst grades of C- and D+, respectively.

The lower Mississippi nutrient loads are high, especially in the tributaries and streams. Flood Frequency scores are moderate, and transportation scores improved with increased funding for dredging and infrastructure maintenance, according to the report.

The Arkansas-Red's poor or very poor scores for freshwater wetland, levee condition, lock delays and treatment violations result in a low overall score for the basin. Although the average age of locks is the newest of all basins, they still need rehabilitation, according to the report.

Water is vital to the prosperity and health of people and their natural surroundings, experts said. If not addressed, it will be costly down the road both financially and in lasting loss of biodiversity and natural resources.

To protect the water system, the initiative called for $2 billion nationally in annual funding through government and private sources to address issues such as river navigation, flood management and the ecosystem. It also urged greater collaboration among river interests and improvements in information gathering and public education, according to the report.

"Arkansans, both citizens and politicians, are seeing and demanding the need for a holistic approach to basin management. With the limited first steps we've been able to take to date, we are able to see large-scale trends that will help us direct money and solutions to the source of the problems," said Michael Clay, chief Hydrologic Systems Branch with the U.S. Army Corps of Engineers Memphis District, which includes southern Arkansas.

Water quality and ecosystems got an F and D, respectively, in the two basins.

These factors are important for wildlife but also ecosystem services from which people benefit. Wetlands, which are under threat, act as nature's water purifier and help mitigate flooding.

Annual nutrient load at key locations in each of the five basin areas have been steady or have gone up over the past five years, resulting in poor water quality scores in the report card.

High nutrient and nitrogen concentrations are unhealthy for humans and removal increases cost to consumers, according to the report card. It also leads to a "dead zone" in the Gulf of Mexico that can kill fish and other marine life.

The U.S. Geological Survey reports that about 1.5 million tons of nitrogen are delivered to the Gulf each year, largely from agriculture. The lower Mississippi basin is affected by all the basins upriver.

It's difficult to parcel out actually how much nutrients each state contributes, said Ryan Benefield, deputy director of the Natural Resources Division in the Arkansas Department of Agriculture.

Arkansas experts say sediment is the No. 1 water pollutant in the state.

"Water quality is everything," said Ben Batten, chief of the fisheries division at Arkansas Game and Fish. "We can't go long without drinking water. So, polluted water -- whether it be from sediment, chemicals or anything else -- is obviously a big problem for us."

When trees are removed, more sediment gets in the water. Dirty, muddy water is also bad for plant and animal life.

"We lose some unique species," he said. "Our ecosystem is healthiest when we have diversity."

Reforesting can help reduce the amount of sediment that gets into the streams and rivers, Batton said. Game and Fish also has a "Stream Team" program that works to educate the public and encourage groups to adopt a stream to monitor and cleanup the water.

Extreme flooding occurred in the watershed in five of the past 10 years, according to the report. Flood frequency can be seen increasing near Northwest Arkansas as well as into the Midwest up past Minneapolis.

Work is being done to reduce the impact of these increased flood trends, the report said.

The average life of a lock and dam is about 25 years, Lutz said. The McClellan–Kerr Arkansas River Navigation System turns 50 next year.

Levee condition on the Arkansas-Red was a reason its score was particularly low. Levees are managed by their local communities, Townsend said.

"Levees are basically living things; they need to be cared for," Townsend said. "What happens is, you go 10, 20 years without a flood or these levees being tested and people forget about them. They just don't get maintained. There are so many in disarray around the nation."

It's important to restore the system as quickly as possible because the system generates more than an estimated $20 million per day for the state.

After the 2019 flooding, the Governor's Levee Task Force encouraged local levee districts to bring their levees into compliance with the Corps Levee Rehabilitation and Inspection Program standards. Under this program, the Corps has the ability to provide rehabilitation assistance for levee systems damaged during flood events.

"That project is going really well, but it's only the start of the work we need to do," Benefield, the Agriculture Department deputy director, said. "We have probably gotten behind, but getting them up to where they need to be and making sure they're maintained is the key with infrastructure. And we're not the only state with aging infrastructure that needs to be addressed."

Directly related to infrastructure, transportation got a D and C+ in the Arkansas-Red and Lower basins, respectively.

A critical lock failure or levee breach, could have huge economic consequences, said Bryan Day, executive director of the Little Rock Port Authority. The state is still feeling the impact every day from the 2019 floods.

"Towns cannot take care of the river systems alone. They're no different than the interstate systems," Day said. "Congress has to invest in infrastructure. America's infrastructure are all, just not good. We are not remaining competitive on the global stage."

The diverse economy of the Mississippi River Watershed continues to drive the national and global economies, according to the report.

Arkansas' inland waterways supported over 55,500 jobs with $2.5 billion in personal income and $10.5 billion in total output, giving rise to $277.8 million in state and local tax revenue in 2018, according to the National Waterways Foundation.

The state has 11 public ports. The Little Rock Port Authority alone had an overall economic contribution of $1 billion from 2015-2019, according to a five-year impact study. It created 1,140 new jobs with an impact of $693 million during that time.

"It will hurt if the systems fails," Day said.

Recreation has also been a major economic driver, which is largely made possible by the watershed. Outdoor recreation area use and park visitations have increased dramatically in 2020 as a result of the covid-19 pandemic, as more people seek natural open spaces closer to home, according to the report.

Arkansas residents are more likely to participate in fishing and camping than the average American, with 63% Arkansans participating in some sort of outdoor activities each year, according to the Outdoor Industry Association's latest State Rec Report.

In the state, more than twice as many jobs directly depend on outdoor recreation than poultry production. Outdoor recreation generated some 96,000 direct jobs, $9.7 billion in consumer spending, $2.5 billion in wages and $698 million in state and local tax revenue, according to the State Rec Report.

Duck hunting alone has an estimated $70 million impact each year in Arkansas, according to the Arkansas Game & Fish Commission.

"One state can't do it alone," Austin said. "You have to have the upstream work to provide downstream benefits. The work being done in Canada is going to help the Gulf migration...Everyone benefits from clean water that marshes and wetlands provide."

ALL HANDS ON DECK

Who's in charge of water? It's complicated.

Still, leaders in business, conservation, navigation, agriculture, academics, basin associations and government all call for integrated management of water resources to safeguard their collective futures and to meet the challenges of a dynamic watershed, according to the report.

"It really has to be a collaborative effort," Benefield said. "We at the Natural Resource Division have a good portion of the area related to water resources in the state, the Corp of Engineers has their portion, [Arkansas Department of Environmental Quality], [U.S. Department of Agriculture], [Natural Resources Conservation Service], Game and Fish Commission -- we all have to work together. One entity couldn't address all the issues."

Each group has their own area of expertise and focus, which converged while forming the Arkansas Water Plan in 2014, he said.

The plan is the state's policy for long-term water management and became effective February 1, 2016, according the Arkansas Natural Resources Commission. The Arkansas General Assembly uses recommendations from each update to determine how to oversee the state's water resources.

"I still think everyone is ultimately is in it for the same reasons: to preserve and conserve our natural resources," Wilson said. "All the wildlife belongs to everybody."

The re-authorization of the Water Resources Development Act is currently awaiting action in the U.S. Senate after passing in the House. The legislation would aim to address some of the same issues raised in the watershed report, including those in the Lower Mississippi River Basin.

The increased annual funding called for by America's Watershed Initiative would address issues such as river navigation, flood management and the ecosystem. It also urged greater collaboration among river interests and improvements in information gathering and public education.

"When you look at things from a watershed standpoint, every little bit counts," Lutz said. "Most of that's upstream from us, everything contributes. Anything that any given state can do makes a difference."

The group plans to release new report cards every five years to track progress and shortfalls. Lutz said increasingly better scientific data and tools as well as how many people care about the watershed makes her hopeful for the future, Lutz said.

"People really care about their rivers," she said. "People always have their river story. It may be very different for different people, but people have that connection and the caring. Where that caring is there, there's opportunity for action."

CORRECTION: Michael Clay is a hydrologic systems branch chief with the U.S. Army Corps of Engineers Memphis District. An earlier version of this article gave an incorrect district.