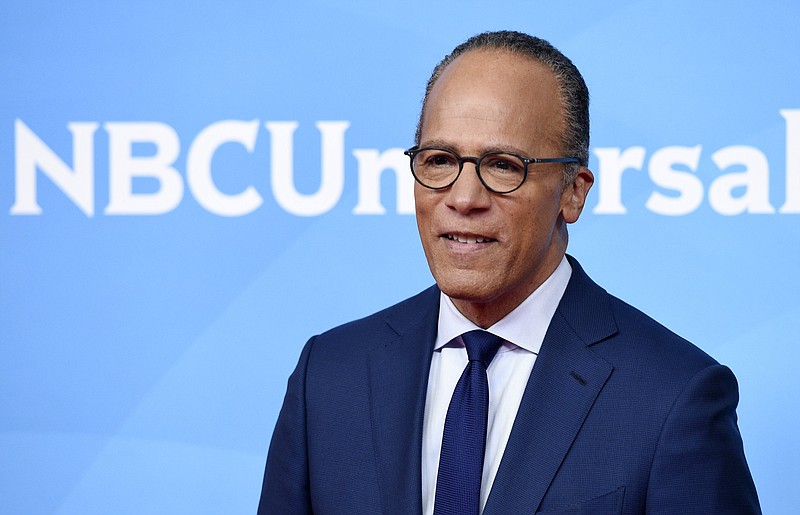 “NBC Nightly News” anchor Lester Holt occasionally ends his broadcasts now with commentaries, an unusual departure for network evening newscasts that have a lengthy track record of playing it straight. Holt’s commentaries trend toward the non-controversial, with a central theme of trying to find common ground that will pull Americans together. (Chris Pizzello/NBC Universal via AP)

The "NBC Nightly News" anchorman frequently ends his broadcasts now with commentaries, an unusual departure for network evening newscasts that have more than a half century's track record of playing it straight.

Holt's essays, many of them pleas for unity in troubled times, can seem mild to viewers used to the rhetorical warfare of cable news. He says he's filling a need for voices of empathy in public life.

"The days of dispassionate journalism are long gone," he said. "We have to acknowledge our audience and validate what we're all seeing."

On the day of the first U.S. covid-19 vaccinations last week, Holt paid tribute to those who had died of the disease, saying that if he were to begin reading names of the 311,000-plus victims nonstop, it would take him 10 days.

On other occasions, he has said anger and obstinance in the wake of covid-19 is not serving the country well. Saying "I told you so" after President Donald Trump tested positive "only serves to take us back down the political rabbit hole that has cost us time and far too many lives," he said in October.

Holt has repeatedly called for peace between political foes. After the election was called for President-elect Joe Biden, he said "both sides deserve a collective primal scream over what we've been through. But tomorrow, maybe we can leave it on the field."

In the midst of the virus and racial unrest this spring, Holt recalled how the United States pulled through the tempestuous political year of 1968.

"The sun eventually rose again, as it always does," he said.

Holt traces his commentaries back to the August 2019 shooting that killed 23 at a Walmart in El Paso, Texas, when he began "Nightly News" by saying, "What on Earth is going on?"

"That was the moment that I realized that maybe there was a lane that I could occupy from time to time to kind of mirror and reflect what people are feeling," he said.

He doesn't want the audience to feel that those who deliver the news are above it all, or numb to everything going on.

There's also a sense of increased comfort in his job. Holt, 61, has been a nightly news anchor since 2015. The NBC broadcast usually reaches 8 million viewers a night, consistently second in the ratings to ABC's "World News Tonight," although a 2018 Hollywood Reporter/Morning Consult poll found Holt beating Muir as the nation's most trusted TV news personality.

Given that he's trying to reach the broadest possible audience, Holt's commentaries are purposely noncontroversial.

"In the current climate, there seems to be no place to position oneself that will avoid alienating someone or another," said news consultant Andrew Tyndall. "Holt at least brings consistency to his newscast on those days when he does end with a commentary. He opens with grisly news about a lethal pandemic and does not try to contradict that."

Don't expect anything like the most famous case of an evening news anchor expressing an opinion, when CBS' Walter Cronkite in 1968 called for a negotiated end to the Vietnam War.

"When I started doing them I wondered, 'have I crossed a line? Is the audience going to reject it?'" Holt said. "I haven't felt that. I try to honor my role and not overstep my bounds as a journalist."

Norah O'Donnell of the "CBS Evening News" seemed to echo Holt last week with a commentary calling on Americans not to let their guard down with the arrival of a coronavirus vaccine.

"We are all in this together," O'Donnell said.

If anything, Holt is careful to the point of sometimes stating the obvious. On the day before the election, he told viewers that "democracy is messy, but we've got to let it work — if not for ourselves, then for our children, who you know are watching us."

"I try to avoid the obvious third rails," Holt told The Associated Press. "Nothing will drown out a message more quickly than if people try to pick it apart for some kind of internal motivations and that's not what I want to do."

"Is there a little 'Kumbaya' in there?" Holt said. "Maybe there is. But I think sometimes we even need that."