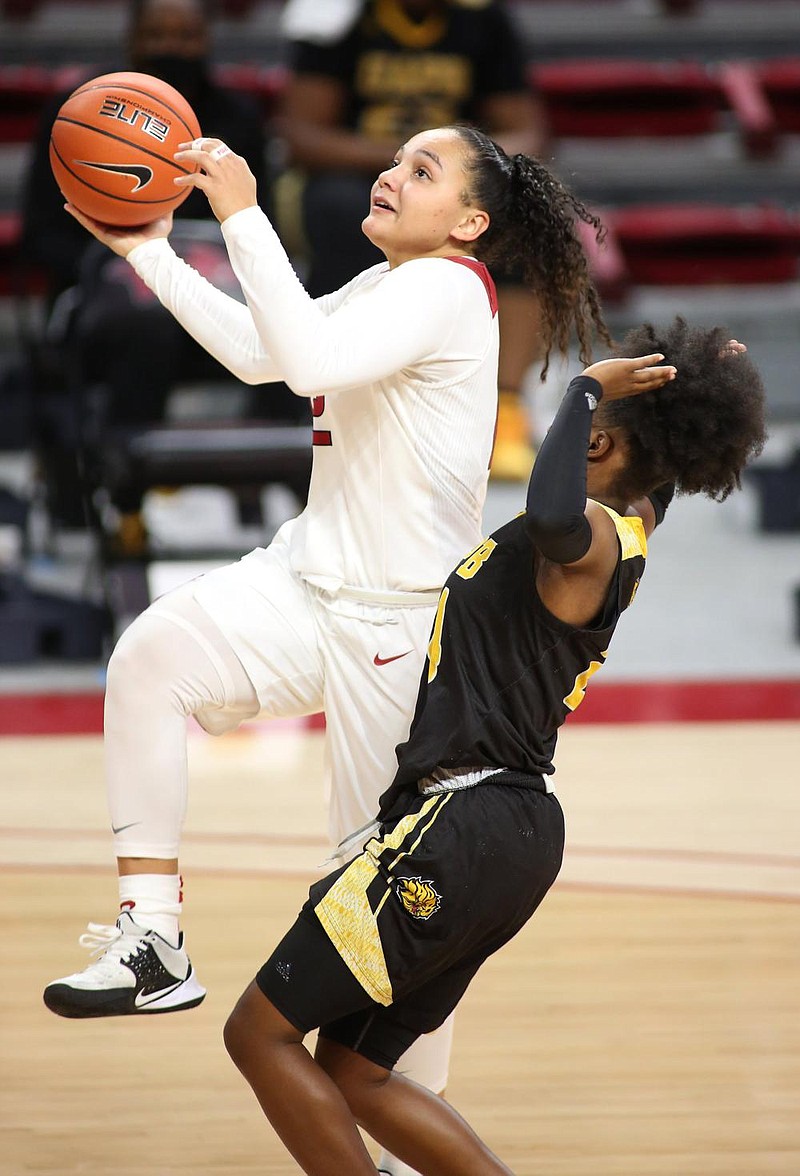 The Razorbacks used a 19-2 first-half run to roll to an 86-52 victory over the University of Arkansas-Pine Bluff in Walton Arena.

Dungee, the team's leading scorer, missed the game with a sore knee, Razorbacks Coach Mike Neighbors said. The 5-11 senior, who averages 18.9 points per game, banged knees with an opposing player in the second half of the Razorbacks' win over the University of Arkansas at Little Rock on Saturday.

"We looked at it [Sunday] and evaluated with the break coming, it's not something we're concerned with lingering but it could've if we hadn't taken a precautionary trip there," Neighbors said.

It all worked out just fine for the Razorbacks, who won their sixth consecutive game and climbed a spot to No. 11 in this week's Associated Press poll.

Arkansas (9-1) held UAPB without a field goal for more than nine minutes and broke away by opening the second quarter with 12 consecutive points to lead 36-12 on Marquesha Davis' steal and layup with 5:10 left in the first half.

Neighbors said the team's performance despite getting just 15 minutes combined from their top two scorers was encouraging.

Marquesha Davis and Erynn Barnum both came up big off the bench. Davis scored 15 points to go with 4 rebounds, 2 blocked shots, 2 assists and a steal. Barnum posted a double-double with 13 points and 10 rebounds.

"That competitive depth is a real thing, and not just me trying to make a cool term up and sound smart," Neighbors said. "It's real. Erynn and Marquesha, and then Jailyn [Mason] playing various roles. I don't like playing without either one of those kids, but it's good to know if foul trouble or the virus or something comes along that we can find a way to win."

The long-armed, 6-foot Davis affects the game in many ways, Neighbors said.

"She changes the game on both ends of the floor, offensively, defensively," Neighbors said. "She improves our rebounding drastically. We actually outrebounded an opponent, which is pretty rare for us. She has a lot to do with all that."

Thomas, a 6-1 senior, believes this team is ready for that challenge because of the added depth.

"I think this year we have so much more balanced scoring, even if somebody is off, there's so many more to pick us up," said Thomas, who had scored just 10 points in the last three games combined before going for double figures Monday. "I think we've expanded our scoring. We shoot a lot of threes, but at this point there's a lot more driving and penetrating and kicking.

"I think our offense has more of a flow to it this year. And I think we're getting a lot better on defense as well, especially our guards getting those rebounds that we needed a lot last year."

Kaila Walker led the Golden Lions (1-4) with 15 points, while Khadijah Brown added a double-double with 13 points and 10 rebound. Joyce Kennerson was also in double figures with 10 points.

Neighbors knows there's quite a challenge awaiting the Razorbacks in the SEC, despite the good run in the nonconference.

"It's not that any one opponent is any better than Maryland or Baylor," Neighbors said of the team's biggest nonconference tests. "It's hard to understand the fact that those 16 games you have, there's not a time to come up and take a breath.

"Not 100% comfortable, but I am confident. I like where we're at. But I still know there's a compounding effect that's getting ready to hit us that no matter what you do in the nonconference you can't prepare for."