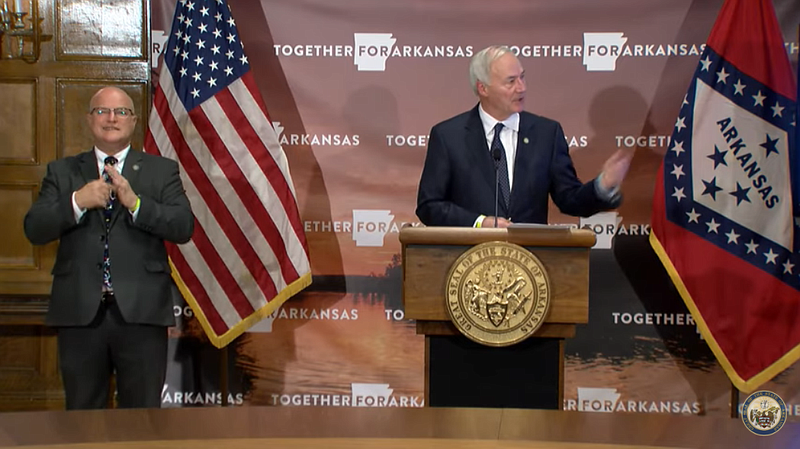 As the state reached a record high of hospitalized covid-19 patients, Gov. Asa Hutchinson announced Tuesday that two facilities will be constructed within the next several weeks to house up to 124 virus patients if hospitals around the state run out of room.

The "alternative care sites" will be located in Little Rock and Van Buren and will cost about $7.4 million - with the "hope" that FEMA will fund 80% of the project, Hutchinson said at a news conference Tuesday.

"It is my hope that we build this out and not have to use it," he said.

The extra hospital space will include eight intensive care unit beds. The J.A. Gilbreath Conference Center on the Baptist Health campus in Little Rock will be retrofitted to accommodate 50 hospital beds while 74 beds will be made out of a Van Buren facility that was purchased by Baptist Health in 2018.

Troy Wells, Baptist Health's president and chief executive officer, said at the news conference that the Little Rock space will take four to five weeks to complete while the Van Buren space will take six to eight weeks.

The state's death toll from the virus, as tracked by the Department of Health, rose by 43, to 3,338.

The number of patients hospitalized with covid-19 in the state increased by 25 to a record high of 1,103. There were 353 covid-19 patients in ICUs, two more than the previous day.

Those patients included 173 who were on ventilators, down from 174.

The number of cases that were considered active dropped by 179, to 21,979, as new cases outpaced recoveries.

The total number of coronavirus cases reported in Arkansas remained at 203,107 Tuesday morning, according to a state website. The death toll remained at 3,295.

[Video not showing up above? Click here to view » https://www.youtube.com/watch?v=wuExTtKv0Ak]

This story was originally published at 12:10 p.m.