Deaths in '20 to top 3 million for U.S.' deadliest year ever 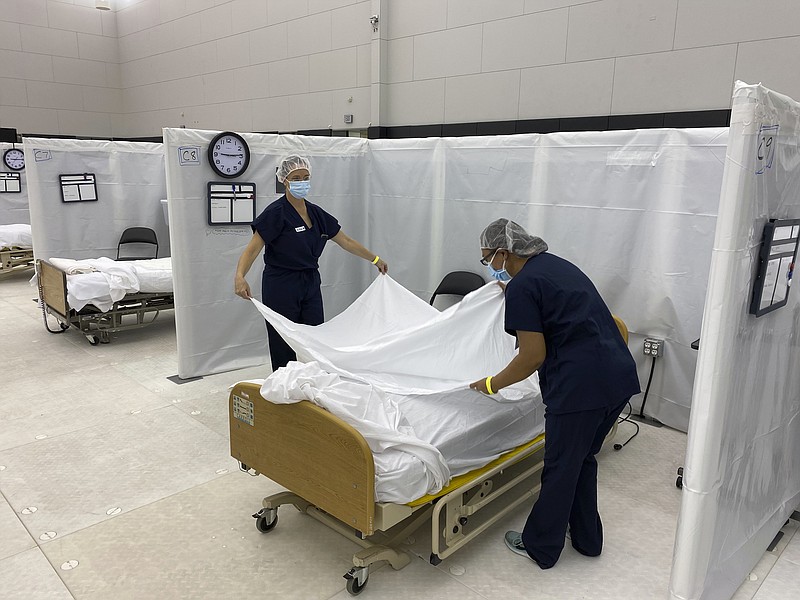 FILE - This Wednesday, Dec. 9, 2020 photo provided by the California Office of Emergency Services (OES) shows hospital beds set up in the practice facility at Sleep Train Arena in Sacramento, Calif., that is ready to receive patients as needed. This is the deadliest year in U.S. history, with deaths topping 3 million for the first time. It's due mainly to the coronavirus pandemic that has killed nearly 320,000 Americans. (California OES via AP, File)

NEW YORK -- This is the deadliest year in U.S. history, with deaths expected to top 3 million for the first time -- due mainly to the coronavirus pandemic.

Final mortality data for this year will not be available for months.

But preliminary numbers suggest that the United States is on track to see more than 3.2 million deaths this year, or at least 400,000 more than in 2019.

U.S. deaths increase most years, so some annual rise in fatalities is expected. But the 2020 numbers amount to a jump of about 15%, and could go higher once all the deaths from this month are counted.

That would mark the largest single-year percentage leap since 1918, when tens of thousands of U.S. soldiers died in World War I and hundreds of thousands of Americans died in a flu pandemic. Deaths rose 46% that year, compared with 1917.

Covid-19 has killed more than 322,000 Americans and counting. Before it came along, there was reason to be hopeful about U.S. death trends.

The nation's overall mortality rate fell a bit in 2019, due to reductions in heart disease and cancer deaths. And life expectancy inched up -- by several weeks -- for the second straight year, according to death certificate data released Tuesday by the Centers for Disease Control and Prevention.

But life expectancy for 2020 could end up dropping as much as three full years, said Robert Anderson of the CDC.

[Video not showing up above? Click here to watch » https://www.youtube.com/watch?v=Oh0s4MEigYM]

That's fairly good news: Deaths usually rise by about 20,000 to 50,000 each year, mainly due to the nation's aging, and growing, population.

Indeed, the age-adjusted death rate dropped about 1% in 2019, and life expectancy rose by about six weeks to 78.8 years, the CDC reported.

"It was actually a pretty good year for mortality, as things go," said Anderson, who oversees CDC death statistics.

The U.S. coronavirus epidemic has been a big driver of deaths this year, both directly and indirectly.

The virus was first identified in China last year, and the first U.S. cases were reported this year.

But it has become the third leading cause of death, behind heart disease and cancer. For certain periods this year, covid-19 was the No. 1 killer.

But some other types of deaths also have increased.

A burst of pneumonia cases early this year may have been covid-19 deaths that simply weren't recognized as such early in the epidemic.

But there also have been an unexpected number of deaths from certain types of heart and circulatory diseases, diabetes and dementia, Anderson said.

Many of those, too, may be related to covid-19. The virus could have weakened patients already struggling with those conditions, or could have diminished the care they were getting, he said.

Early in the epidemic, some were optimistic that car crash deaths would drop as people stopped commuting or driving to social events. Data on that is not yet in, but anecdotal reports suggest there was no such decline.

Suicide deaths dropped in 2019 compared with 2018, but early information suggests they have not continued to drop this year, Anderson and others said.

Before the coronavirus even arrived, the U.S. was in the midst of the deadliest drug overdose epidemic in its history.

Data for all of 2020 is not yet available. But last week the CDC reported more than 81,000 drug overdose deaths in the 12 months ending in May, making it the highest number ever recorded in a one-year period.

Experts think the pandemic's disruption to in-person treatment and recovery services may have been a factor. People also are more likely to be taking drugs alone -- without the benefit of a friend or family member who can call 911 or administer overdose-reversing medication.

But perhaps a bigger factor are the drugs themselves: covid-19 caused supply problems for dealers, so they are increasingly mixing cheap and deadly fentanyl into heroin, cocaine and methamphetamine, experts said. 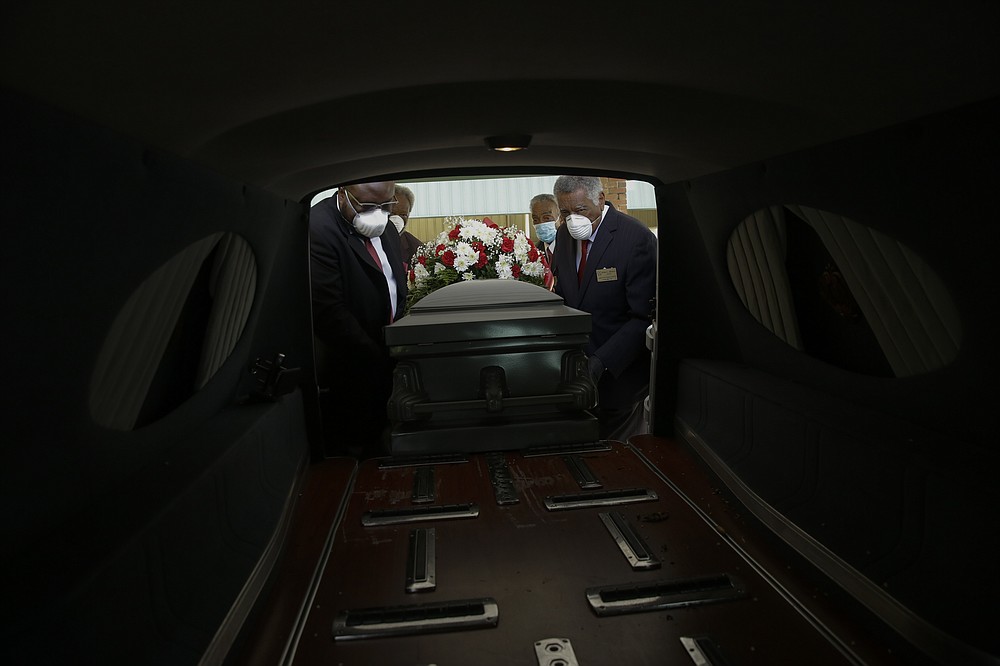 FILE - In this Saturday, April 18, 2020 file photo, mortician Cordarial O. Holloway, foreground left, funeral director Robert L. Albritten, foreground right, and funeral attendants Eddie Keith, background left, and Ronald Costello place a casket into a hearse in Dawson, Ga. This is the deadliest year in U.S. history, with deaths topping 3 million for the first time. It's due mainly to the coronavirus pandemic that has killed nearly 320,000 Americans. (AP Photo/Brynn Anderson) 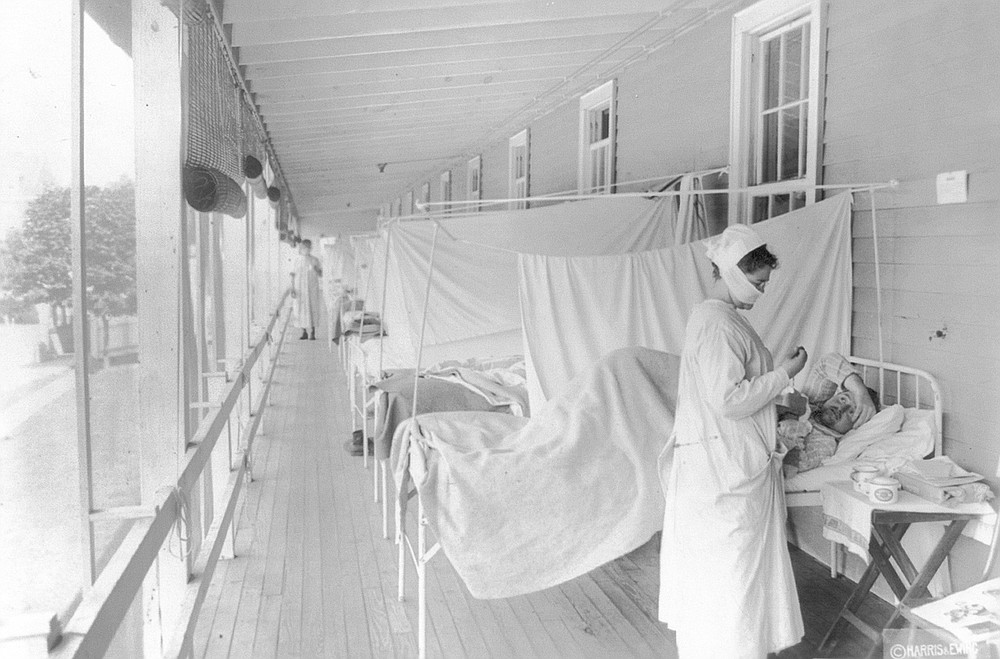 FILE - In this November 1918 photo made available by the Library of Congress, a nurse takes the pulse of a patient in the influenza ward of the Walter Reed hospital in Washington. In 1918, tens of thousands of U.S. soldiers died in World War I and hundreds of thousands of Americans died in a flu pandemic. Deaths rose 46% that year, compared with 1917. (Harris & Ewing/Library of Congress via AP, File)
ADVERTISEMENT