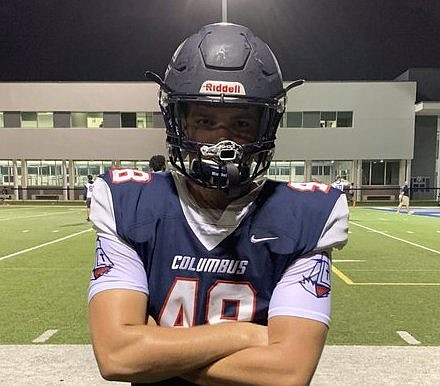 Long snapper Francisco Castro has agreed to be a preferred walkon at Arkansas.

He agreed to be a preferred walk-on in Fayetteville and said Fountain and the staff was relentless in recruiting him.

“They showed me the most love,” said Castro, whose cumulative grade point average is 4.13. “They’ve sent me countless letters and their facilities are really nice. Campus is really nice. The area is really nice. It seems like the best fit for me and they have a really good business school, and that’s what I want to pursue.”

His long snap averages .68 seconds to .70 seconds, which is considered top tier for snappers. Kohl’s Kicking rates him a five-star prospect and the No. 5 snapper in the nation.

A chance to play early and his relationship with Fountain helped with his decsion.

“I’ve been talking to him on like a daily basis,” Castro said. “Updating him on how my season has been going. We won the championship for our division last weekend. He’s just been so supportive of everything and he’s been showing me what Arkansas is all about.

"He’s just been a really good coach to talk to and I feel like he’s somebody I can call my coach for the next couple of years.”

Fountain also landed ESPN’s No. 1 kicker in Cameron Little, and Patrick Foley, Kohl’s No. 14 rated punter for the 2021 class.

“I’ve already made good friends with them,” Castro said. “It just seems like someplace I can call family for the next four years of my life.”