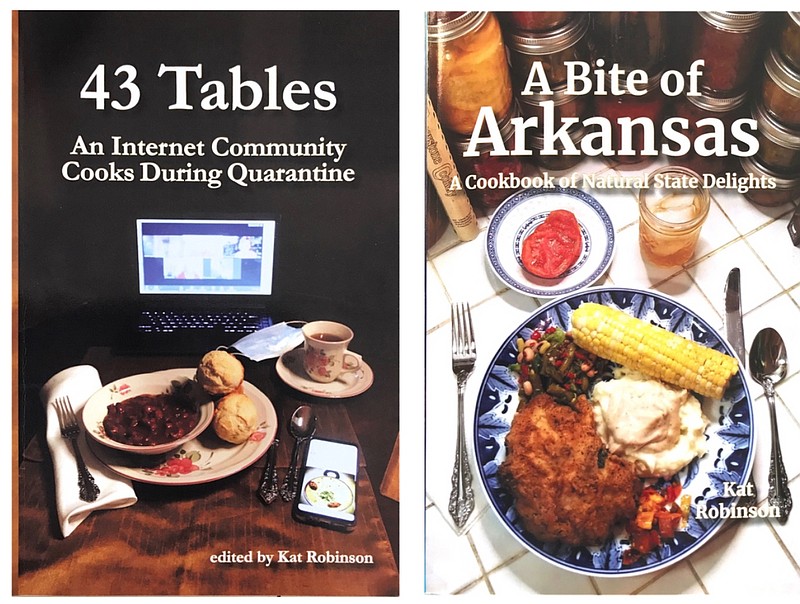 "43 Tables: An Internet Community Cooks During Quarantine" edited by Kat Robinson and "A Bite of Arkansas: A Cookbook of Natural State Delights" by Kat Robinson

No one knows Arkansas food better than Kat Robinson. From the Ozarks and the River Valley to the Delta and all the pie shops along the way, the prolific food and travel writer has visited nearly every corner of the Natural State — figuratively in her books and quite literally in her car.

When the pandemic put the brakes on Robinson's travels and appearances, she didn't let it stop her from doing what she does best, documenting and sharing her vast knowledge of Arkansans culinaria.

In October she released "43 Tables: An Internet Community Cooks During Quarantine" (Tonti Press, $17.99) inspired by the meals her friends were sharing on social media in the beginning of the pandemic. The book features more than 90 recipes and photographs from 44 individual contributors including Robinson's daughter and partner (hence the 43 tables). There's a little something for every kind of cook in "43 Tables" as the recipes range from simple and straightforward to complex and involved.

With nine books under her belt and a 10th on the way, Robinson has spent much of her career telling the story of Arkansas food, its growers and makers. But one thing Robinson hasn't done — until now — is share the recipes and stories of her own kitchen.

"A Bite of Arkansas: A Cookbook of Natural State Delights" (Tonti Press, $37.99 hardcover; $27.99 paperback coming Jan. 26) is more than a cookbook, it's also memoir. Alongside recipes for 10 different gravies, fried green tomatoes (three ways!), hearty casseroles, stews, vegetables dishes and yes, pie, Robinson serves up stories from her life — childhood memories of breakfast at her grandparents' house, her days as a television news producer and that moment when she realized she makes perfect fried chicken.