OPINION | PLATFORM DIVING: 'Wonder Woman 1984' is a little silly, a lot of fun 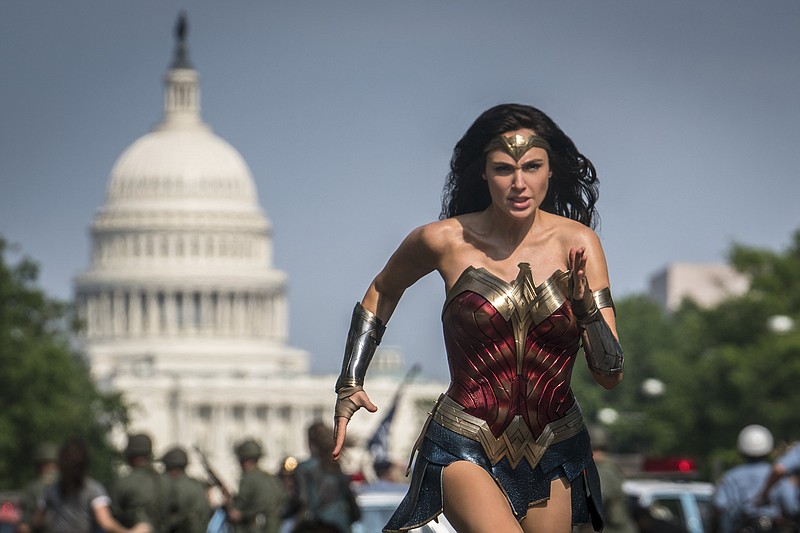 It seems like forever ago I watched the first “Wonder Woman” movie. That’s how messed up this year has been; 2017 seems like an eon ago. But back then, most folks considered it the only good DC Comics film (DCEU).

Now things are different. Every DC movie since “Aquaman” has been a good film (even if I found “Joker” to be overrated and a little boring). And after many many delays, I’m happy to say “Wonder Woman 1984” continues that winning streak. It’s a solid movie.

I initially had some trouble watching it. Warner Bros. wanted me to use a certain app that was only available on a handful of devices. I ended up watching most of the movie on my iPad, and then the app stopped working. So I finished the last 20 minutes on my iPhone. Fun times all around, but I’m glad I received a review copy at all. Sometimes studios flat out don’t reply when I ask for review screeners.

Gal Godot made her debut as Wonder Woman (Diana Prince) in “Batman v Superman: Dawn of Justice” (such a rough movie). The one thing everyone seemed to agree on about that film? Wonder Woman was the best part.

And one other thing I’ll credit that movie with is the Hans Zimmer & Junkie XL track “Is She With You?” That electric cello melody sure is easy enough to get stuck in my head. I’m glad to see it made a return in both “Wonder Woman” and snippets of “Wonder Woman 1984.”

One of my favorite aspects of “Wonder Woman” was Chris Pine’s pairing with Gal Godot. He played a pilot, Steve Trevor, shot down near her island. I enjoyed how naturally Pine bonded with Godot in the story, how easily he slipped into the role of second banana and still managed to actually be useful to Diana. There’s not a toxic bone in Trevor’s body.

I like Chris Pine in nearly everything I’ve seen him in. He’s a great Captain Kirk (minus the bitterness and fragile ego William Shatner has developed over the last few years). Nobody talks about the movie, but he was a great captain in “The Finest Hours.” The only movie I’ve seen him in I didn’t like was “A Wrinkle in Time,” but that was less about him and more about the movie itself.

So when I saw his character was returning for “Wonder Woman 1984,” I wondered how they were going to do it after killing him off in the first movie. How you bring back a character is important, since it’s really easy to do poorly. Bringing back Jon Snow? Excellent payoff. Bringing back Captain Barbosa? Cool twist. Bringing back Colin Firth in “Kingsman: The Golden Circle”? Cheap.

I won’t completely spoil how they bring Pine back in “Wonder Woman 1984,” but it’s a little strange the way they accomplish it. Not bad, just weird. Of course, once he’s back, Pine is so ridiculously charming and good to Diana that I didn’t care. I could watch two hours of Chris Pine just wandering around being amazed by the 1980s, everything from Poptarts to breakdancing.

“Wonder Woman 1984” (not a George Orwell crossover, thankfully) opens with a flashback of young Diana competing in some Olympic-like games with other Amazon warriors on Themyscira. It’s a great way to open the film, pretty darn exciting. Lilly Aspell killed it as young Diana.

The rest of the movie follows Diana who, after making a wish to get the love of her life back, finds that wishes have a cost. And when a con man named Maxwell Lord starts making wishes, the world erupts into chaos.

Pedro Pascal plays Lord, and it was pretty jarring to see him go from good guy Mandalorian in a big finale one week ago to villain in “Wonder Woman 1984” just days later. But he does give a solid performance as the villain determined to show the world he’s not just a con man, but someone important and worth being proud of.

Of course, what really hooked me emotionally was his desperation to prove to his young son that he wasn’t a failure. That tugged the heartstrings a bit, and it was definitely helped by the fact he’s spent a year or two fostering Baby Yoda now.

The other semi-antagonist of “Wonder Woman 1984” was Cheetah (Dr. Barbara Minerva), played by Kristen Wiig. When one of my coworkers found out I was reviewing the movie, he said “I would rather have a root canal without pain meds than watch her for five minutes.” Yowza.

Funny thing is, I didn’t think she gave a bad performance. She was okay. I related to her plight and understood why her character made the choices she did.

When DC announced Cheetah would be featured in this movie, I was wary. It’s all too easy to screw up the special effects/costume for anthropomorphic animals and make them look terrible. See: “Cats.”

But when I got to Wonder Woman’s showdown with Cheetah, I was impressed. They actually did a good job of making Wiig look good as the villain. She translated well from the comic to the big screen. And you can’t always say that.

The villains are the biggest improvement from “Wonder Woman” to its sequel. The first movie’s villains were Doctor Poison (holy cheesy villain name, Batman!), Erich Ludendorff and Ares. The number one lesson from “Spiderman 3” is never have more than two villains in your movie. You can’t develop them all.

Doctor Poison ended up being generic evil scientist who wants to kill because… you know, evil. Ludendorff was an evil German general designed to match his historical counterpart. No real development there. And then there was Ares, who just wanted to create war because that’s what the screenwriters read on the Greek god’s Wikipedia page.

The final battle ended up being reduced to him shooting lightning at Diana while screaming, “I will destroy you!” (eat your heart out, Shakespeare). And Diana said something corny like, “I believe in love.” Once Steve Trevor made his (necessary?) sacrifice, the narrative took a small dive.

So it was refreshing to have some relatable and human villains in “Wonder Woman 1984.”

Some of the action got a little cheesy. Diana’s lasso of truth was a little OP in this movie. It was basically her solution to every problem and went way beyond making folks tell the truth. The scenes of Wonder Woman flying were on par with Christopher Reeve, and not in a good way. The way she could lasso lightning bolts in the movie and then just leap for miles and miles made me snicker and say, “Yeah, okay.”

But I also had to hand it to the movie for working in Wonder Woman’s invisible jet without it being as corny as it was in the old “Superfriends” cartoon.

Gal Godot was once again a kickass heroine. She’s charming despite being heartbroken after all these years. I root for her, and when she makes the big sacrifice in this movie, it hurts. Godot showed me it hurt, and I believed her. She truly is Wonder Woman. No complaints with any of her performance in this film.

I think Godot and director Patty Jenkins make an excellent duo, and I’d love to see them team up again for a third “Wonder Woman” movie if they decide to make one. Put more women in charge of superhero movies, Hollywood. Jenkins did a better job in “Wonder Woman” and its sequel than Joss Whedon did with “Justice League” or David Ayer did with “Suicide Squad.”

“Wonder Woman 1984” isn’t quite as good as “Wonder Woman,” and it’s a little silly at times, but it’s still a good movie. I’m definitely looking forward to whatever DC cooks up next in “The Suicide Squad” and “The Flash.”

But “Wonder Woman 1984” showed me that while DC can recast Batman 1,000 times, it needs to do whatever is necessary to keep Gal Godot happy. Heck, buy her a diamond tennis bracelet if need be.