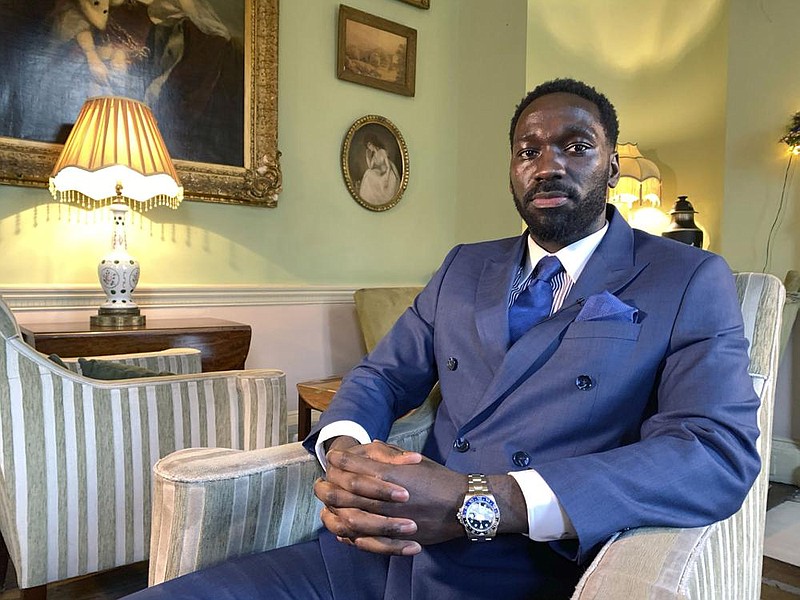 Moses Swaibu, a former professional soccer play who was jailed in 2015 for match-fixing allegations, fears the financial crisis in the game caused by the coronavirus could make players more vulnerable to taking bribes. He told The Associated Press a match fixer has a potential “pool of people he can manipulate.” (AP/Rob Harris)

LONDON -- When Moses Swaibu stands in front of future Premier League players, warning of the dangers of becoming embroiled in match-fixing, he is speaking from experience.

"You do not want to end up in my position, going to prison," Swaibu recalls telling some of the game's most famous players in talks at training grounds, "sitting in the cell with someone you once looked up to that played in the Premier League, eating tinned food and a packet of crisps and someone opening your door, telling you what you should and shouldn't do for 24 hours.

"And that's when I would say the penny drops. But then I'll turn around and say that's the worst-case scenario. Best-case scenario is you're going to go play in the Premier League and everyone's happy."

Swaibu's educational talks at academies with future stars are about ensuring the current generation of players do not make the same mistakes as him. They are lessons in how a series of fateful mistakes ended up five years ago with him being convicted of conspiracy to bribe lower-league players in England and jailed, along with Delroy Facey, who played as a striker in the Premier League for Bolton.

While the 31-year-old Swaibu began his career at Crystal Palace, he never got to play in the top division, drifting down the leagues before ending up in the fourth professional tier at Lincoln where he met Facey.

"Delroy had asked us to come down to his hotel room and he introduced us to these match-fixers that wanted us to throw a game," Swaibu said in an interview with The Associated Press. "They produced around 60,000 euros but at that time, everyone turned around and said, 'No, we're not going to do it.' But it was never reported [to the authorities]."

It set Swaibu on a path that led to spending four months in jail after a judge denounced his and Facey's behavior as "like a cancer" that could have undermined the fairness of football. Investigators said they were part of a concerted attempt to build a network of corrupt players in Britain.

Swaibu insists no games were ever manipulated but even just offering money to come to meetings with potential fixers is wrong -- and he wants players to be aware of that.

"A lot of people probably couldn't understand what I was going through," Swaibu said, "that I was faced with a lack of payment, bad relationships with managers, traveling up and down the country, not knowing when I'm getting paid, not knowing how I'm going to pay my bills. There's so many variables that go into when you actually make any type of decision."

Fixers will target vulnerable players, not necessarily to manipulate the actual result but moments within matches.

"They may know you have a gambling problem or you like to put on bets, they may take your number, they may add you on Instagram, they may add you on social media," Swaibu said. "Then before you know it, you think you've made a friend, but that friend almost grooms you in a way where he may ask you potentially one day, 'Have you ever thought about getting a yellow or red card?'"

The financial uncertainties in the lower professional leagues caused by the coronavirus pandemic could see players even more tempted to cash in.

"So Mr. Match-fixer or Mr. Corruptor that's fully aware of all the latest news and media, he almost has a pool of people he can manipulate," Swaibu said. "So he may not turn around and say, 'I'm going to give you 10, 20, 30 grand.' He may turn around and say, 'OK, if you come to this meeting, I'll give you 1,000 pounds, but I don't want you to do anything.'

"That alone is almost a form of grooming because it induces you to say, 'Well, go into the meeting. It's not really illegal, is it?' "

That ultimately could lead to a player's career ending in the type of life ban received by Swaibu.

"Whilst I was in prison and I spoke to other prisoners ... it made me realize that this is a place I could never, ever be ever again," Swaibu said. "And it's almost like a worst nightmare if anybody could have it. So I knew if I came out of prison, everything that I had done going into prison or being able to go from Point A to Point B and being locked up in a cell, I now need to come out and do the complete opposite and understand what are values, what are ethics, what are morals, what is integrity."

Now he is welcomed into the biggest clubs in England to deliver salutary lessons from someone with painful experience of where becoming entangled in a world of illegal betting on the game can end up.

"At least now they have had our education," he said. "There are Premier League players that are playing actively today that have been approached by match-fixers, but they have done the right thing, which is what we should have done, which wouldn't have resulted in us going into prison."