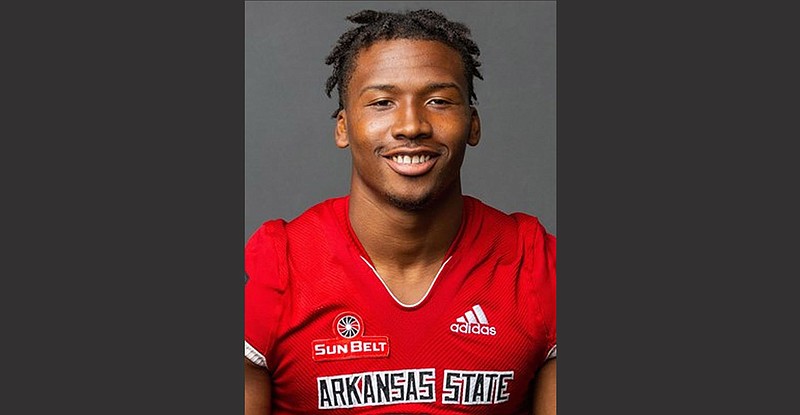 JONESBORO — The players who convened in Zandra Clayton’s kitchen most Sundays for the past four years could count on a few staples.

Her chicken was a given. Former Red Wolves Kendrick Edwards and Justin McInnis enjoyed her greens, and the mac and cheese, too.

One night, Clayton cooked something with a Cajun bite. Kirk Merritt, the former Arkansas State University receiver from Louisiana, loved it; for Clayton’s son — Jonathan Adams — the spice was too much.

“I love to cook, but I’ve never been the type that just cooks small,” she said. “I’m always cooking big.”

Since her son joined the Red Wolves in 2017, the kitchen in her Jonesboro home has fed most every ASU wide receiver in that time, always with enough for seconds and leftovers.

But Clayton’s home has become more than a place for Red Wolves’ wideouts to get a home-cooked meal.

Swallowed by the cancellation of ASU’s Dec. 12 season finale, the departure of Blake Anderson and the arrival of Butch Jones were the final days of Adams’ Red Wolves career. The son of a former ASU star, the receiver from Jonesboro came to the Red Wolves after receiving few other offers. He leaves as one of the most accomplished pass catchers in program history.

During his senior season, Adams was targeted more than any other wideout in the nation and caught 79 passes for 1,111 yards and 12 touchdowns, earning Sun Belt Conference Offensive Player of the Year. His name is littered all over the program’s record book as he heads to Texas to train for April’s NFL Draft.

Adams transformed from a green underclassman to a senior leader in four years, growing into an ASU wide receiver room that’s sent pass catchers to the NFL and other corners of professional football in recent seasons.

Clayton’s kitchen is where Adams took Merritt and fellow receiver Omar Bayless to eat Sunday dinners with his mother — “They were like big brothers to Jonathan, and he looked up to them,” Clayton said. This fall, it’s where Adams filled a cooler with boxed meals for his younger teammates.

More than simply a place for a comfort meal, her kitchen became a home away from football, shaping Adams and a generation of ASU receivers.

Standing on sweltering turf in July, Corey Rucker felt butterflies in his stomach while staring at the empty bleachers of Centennial Bank Stadium. All the freshman from Bentonia, Miss., wanted to do was make a good first impression.

Rucker, a 6-2 receiver, was there with a group to catch some balls from Red Wolves quarterback Layne Hatcher. When he got his chance, Rucker flashed the athleticism and route-running ability that made him a star at Yazoo County High School.

“I made some crazy catches,” Rucker recalled.

Waiting for him at the end of the drill was Adams.

“ ‘Calm down a little bit, bro,’ ” Rucker remembers the veteran saying jokingly. “ ‘You might come for my spot.’

“Since that day, he’s been like a big brother to me. It means a lot for a guy like that to be in your corner, to have your back and to want you to be great.”

Adams saw himself in Rucker, only the freshman possessed far more body control and technique than Adams had when he arrived in 2017.

Adams came to ASU with speed, size and explosiveness, but few of the technical traits required of a Division I receiver. He needed to work on the fundamentals — from route running to positioning to his releases.

Adams also had to learn to cork his emotions.

“He used to get frustrated really quickly,” said former wide receivers coach Kyle Cefalo, who joined Anderson at Utah State earlier this month. “He wants to make every play and catch every ball. We had to turn Jonathan from a phenomenal athlete to a phenomenal wide receiver.”

As Adams settled in — catching eight passes and serving on special teams as a freshman — he turned to the upperclassmen around him.

In position group meetings and on the practice field, he gleaned techniques and an understanding of the offense from a group of receivers who took him in. When his fundamentals finally caught up with his physical talent in 2019, Adams caught 62 passes for 851 yards and 3 scores as a junior.

By then, Adams had spent time around three eventual professional receivers. McInnis was drafted No. 6 overall by CFL’s Saskatchewan Roughriders in 2019. Bayless, the 2019 Sun Belt Player of the Year, and Merritt both signed NFL deals with the Carolina Panthers and Miami Dolphins, respectively, this season.

The same group that spent time working together at the team facility made it to Clayton’s as often as possible for the comfort of her cooking and chance to just get away from the game together.

“The relationships have always been good with the wide receivers,” Adams said. “We’re always having fun and laughing. You would never catch the receivers mad at each other.”

The foundation around Adams and his talent was laid.

“They set the example on the field and in practice,” Adams said. “We all know where we wanted to be in life. We all want to go pro. We all had the same common goals in life being young guys playing football. They showed me the way.”

This fall, Adams assumed the leadership mantle. With Rucker under his wing, along with other underclassmen including Jeff Foreman, Adams became the teacher.

In practice, Adams quizzed the underclassmen on play calls and their routes. In meetings, he showed them how to watch film and offered advice he once received from McInnis and Bayless.

Similar to his predecessors, Adams also led by example.

“I was the guy they were looking at,” Adams said. “I was going to give as much advice as I could. There’s a lot of stuff I know, that I’ve learned, that I think they should know.”

On Dec. 5, Rucker and Foreman each took advantage of an opportunity they had been working toward all season.

With Adams sidelined by a hairline fracture in his hip, Rucker and Foreman moved up the depth chart and torched Louisiana-Monroe. Rucker caught 9 passes for 310 yards and 4 touchdowns in his first start, shattering the 23-year-old program receiving yards record set by Lennie Johnson. Foreman finished with 144 yards and two scores.

Waiting on the sideline every time the pair came off the field was Adams, prepared to offer advice and encouragement with his final game in a Red Wolves uniform already behind him.

“I knew they were going to be ready,” Adams said. “I’m just ready to see what they have in store next.”

Covid-19 threw a wrench into Clayton’s Sunday night dinner club that had so bonded ASU’s receivers. Even though the group couldn’t gather the same way, Adams and Clayton kept the receivers fed, including Thanksgiving meals for teammates before a Nov. 28 game against South Alabama.

“I went to Sam’s Club and got those Styrofoam to-go containers,” Clayton said. “I’m piling them up with food and Jonathan is delivering them.”

For the past four years, her kitchen and the food that came out of it not only nurtured the stomachs of ASU’s receivers but also a position group that has thrived in Jonesboro.

The bond a young Adams forged in her home with his predecessors led to his brotherly ways with the next generation this season.

“Every week, it was a bunch of young men at the table just grubbing,” Clayton said. “But I wanted them to make sure they felt that brotherhood.” 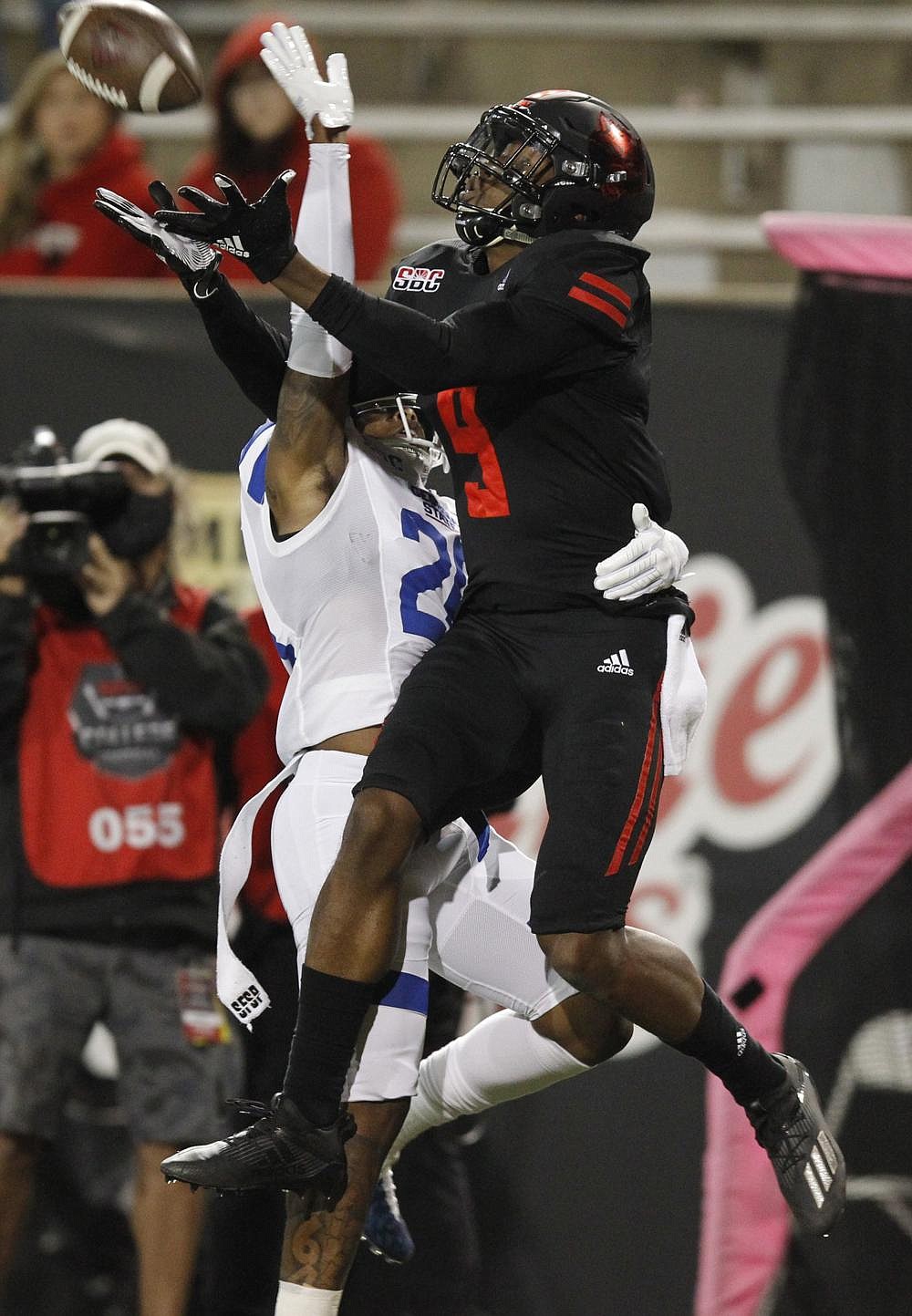 Jonathan Adams grew into a leadership role at Arkansas State during his four years, becoming one of the top wideouts in the nation as he caught 79 passes for 1,111 yards and 12 touchdowns this season. Adams, who was named Sun Belt Conference Offensive Player of the Year, now turns his attention to the NFL Draft and will train in Texas to prepare. (Arkansas Democrat-Gazette/Thomas Metthe)
ADVERTISEMENT