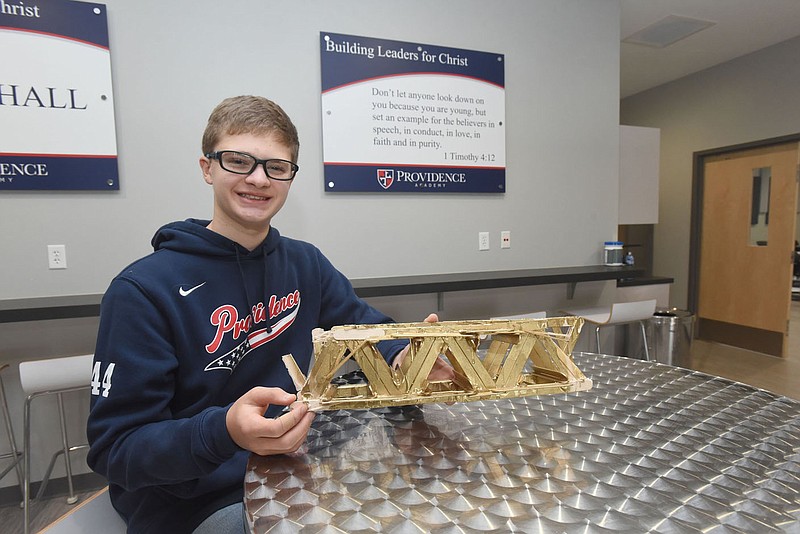 The semester-long assignment for Chelsea Morton's advance placement physical science class was to build a bridge capable of holding 75 pounds for at least one minute using only 4.5-inch-long craft sticks and white school glue as construction materials, she said.

Some bridges failed to hold the required 75 pounds, Morton said, with about 360 pounds being the most any other bridge supported this year.

Tozer, a 14-year-old eighth grader from Fayetteville, said he chose to take physical science just for the opportunity to participate in the project.

"I love building things," Tozer said, adding he's been creating with plastic building blocks since he was 5 or 6 years old.

He relied somewhat on his own inspiration but also researched successful bridges online and incorporated lessons from class and guest speakers.

"Usually, whenever you're given a project, you are given all these instructions on how to build it," he said. "Since this one I had free rein on, I was able to really put all my unique designs into it."

Tozer incorporated equilateral triangles into much of the construction, which he said gave the bridge strength by allowing weight to be evenly distributed to the points of the shapes. He likewise used trusses to hold together segments of the bridge and painted it gold to help with aesthetics.

"It was using the bridge to the fullest capacity," he said.

The teen was so enthusiastic about the project, Tozer said his parents had to ground him from working on it at one point.

"I would use every spare minute that I could on the bridge," he said. "I'd just work on the bridge as my excuse to not do the other homework."

His father, John Patton, said he simply wanted to vacuum the teen's bedroom.

"His room was a disaster," he said. "For a good couple of months, it was filled with Elmer's glue and Popsicle sticks everywhere."

Tozer said he made a 14.75-inch-long practice bridge that held 756 pounds.

He was unable to fully gauge the strength of the eventual design Dec. 7 at school, he said.

The test involved putting the bridge on top of two cinder blocks spaced 14 inches apart and placing increasing amounts of weight onto the structure, Tozer said.

When he ran out of weights, he used textbooks and eventually had a fellow student stand on it.

"I used one of my classmates named Alex Gaston," Tozer said. "We got to 285 pounds."

John Patton said they took the bridge to Planet Fitness in Fayetteville that evening to see just how strong it was.

A member of the staff had participated in a similar project as an engineering student in college and was happy to allow the duo to complete the experiment at the gym, he said.

Tozer said he used 45-pound weights, watching the stack grow taller and taller on top of the bridge, which was again spanning a 14-inch gap between two cinder blocks.

"We kept on borrowing weights from random areas, and then people actually started giving us weights," Tozer said.

The teen stacked 26 weights before the bridge finally gave way at the 1,170-pound mark, he said.

"It crumbled a little bit on one side and broke," Tozer said, noting the bridge was able to hold the weight for at least one minute, solidifying his school record for the project.

"I was really excited," he said.

Morton said the project wasn't part of a formal program, and there's no way to know how the final weight compares to state or national records.

Tozer said he learned a lot about the strength of triangles but doesn't know if a career in engineering is in his future.

Morton said she plans to do the project again next year.

"They're so inspired to do it, not just because of the competition, but because they're so interested in it," she said. "If you love science, it shows that way." 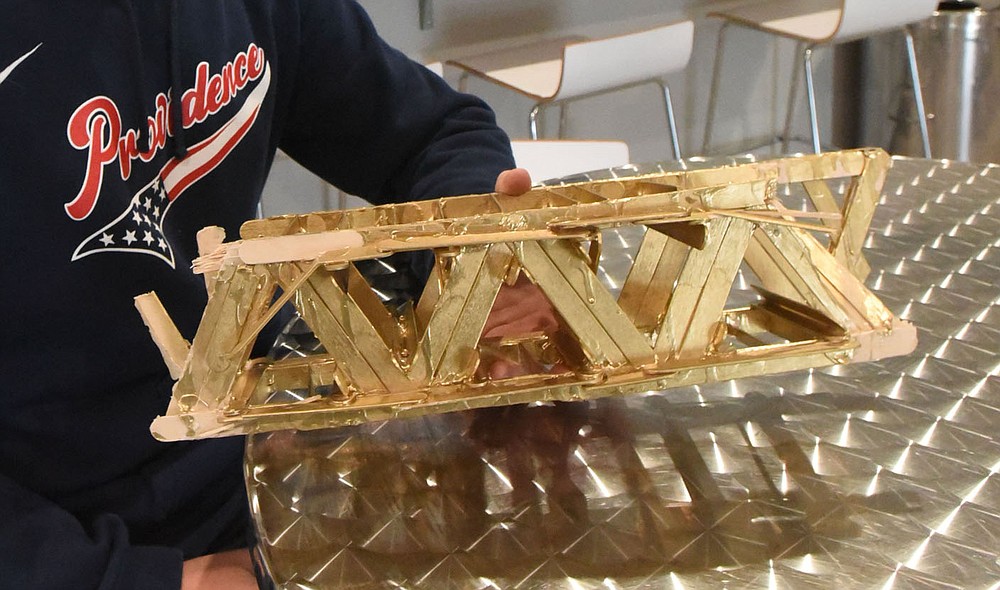 Tozer Patton’s record-breaking bridge test can be viewed on YouTube at https://www.youtube.com/watch?v=uoCCr7U_3Io.