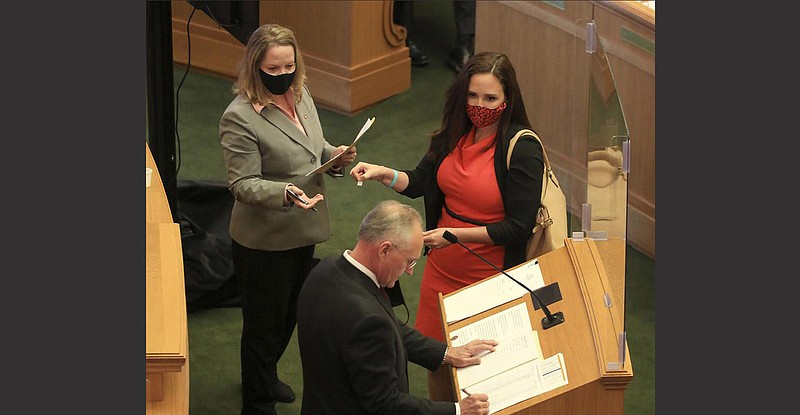 After the number of women in the Arkansas Legislature reached records over the past two years, the 93rd General Assembly will have fewer women in its ranks than at the start of 2019.

There are 35 women serving in the House and Senate, an all-time high that was reached just this month when state Rep. Jill Bryant, R-Rogers, was sworn in after winning in a special election.

Bryant will serve for less than two months, however, before her husband, Joshua Bryant, takes over to serve a full term in House District 96. He was prevented from running in the special election because of his current job as a Benton County justice of the peace, so his wife ran instead.

When new and returning members are sworn in next month, women will hold 31 of the 135 seats in the Legislature. (That includes Democrat Ashley Hudson, who has been certified the winner in House District 32, but faces ongoing legal challenges of the election results.)

The Legislature has an incoming freshman class of 17 that includes just two women, the smallest percentage of women in any freshman class in the past five years.

The drop in the number of women in the Arkansas Legislature is the opposite of a national trend on women serving in Congress and in other state legislatures.

According to the Center for American Women and Politics at Rutgers University, at least 2,236 women will serve in state legislatures after this year's elections, an all-time high. That number could rise after uncalled races involving women are decided.

Additionally, a record of at least 131 women will serve in the 117th U.S. Congress starting next year, according to the center. That's up from the previous record of 127 set in 2019.

Jean Sinzdak, the associate director of the Center for American Women and Politics, said Arkansas and Alaska each saw women's ranks in their legislatures fall by four in this year's elections, more than any other state in the country.

"Unfortunately, Arkansas is at the bottom of the pack there," said Sinzdak, adding that between eight and 10 states saw decreases in the number of female lawmakers. "Most [states] have either added or at least stayed steady in terms of their numbers."

Burch, one of the Arkansas women who lost reelection this year, said women entering politics remain especially prone to barriers if they are employed or are raising children.

Burch, a retired brigadier general in the Army Reserves, said she chose to step down from her job as an attorney at the Department of Human Resources when she was first nominated to run as a Democrat in a 2016 special election. Four years later, she attributed her loss to the overall partisan trend in her region of southeast Arkansas.

Democrats attributed their caucus's larger proportion of women to enthusiasm spurred by the election of President Donald Trump, the 2017 Women's March and #MeToo movement, after which the party gained seven members in the midterms and subsequent special elections. They also pointed to the existence of organizations such as the Progressive Arkansas Women PAC, which help recruit and support female candidates.

"I think women realized that we needed to run, we had to get out there and get involved in the conversation and be at the table," said House Minority Leader Tippi McCullough, D-Little Rock, who was first elected in 2018.

The 28 women running as Democrats made up 40% of the party's total slate of legislative candidates. The 21 women who ran as Republicans, meanwhile, represented 17% of the GOP's slate of candidates.

After the election, the Republican Party of Arkansas elected its first chairwoman, Jonelle Fulmer of Fort Smith. In addition to Fulmer, the party elected women to all eight of other elected-officer positions that are open to both men and women.

Fulmer said the increased number of women in the party leadership makes it "very likely" that the party will be able to recruit more women going forward.

County chapters of the Arkansas Federation of Republican Women, which also organize a network of political action committees to spend money on races, are an important stepping stone for many Republican women seeking office, Fulmer added.

"Going forward, we are just going to be looking for the best candidates that we can find. And I know a lot of them will be women, but I don't think that it's always going to be the same number," Fulmer said. "I think that number's going to ebb and flow as life changes and women are available to step up."

Before a record number of women were elected to the state House in 2018, Capp began a project with female lawmakers in both parties to film short monologues about their lives and entry into politics. Those were posted to social media using the hashtag "ARGIRLSLEAD."

While the initiative remains active in the House, Capp declined to run for reelection so she could seek a local judgeship, which she won.

This year, another organization -- aimed at recruiting and supporting minority-group female candidates -- was started by state Rep. Vivian Flowers, D-Pine Bluff, who is returning to the Legislature in 2021.

In an interview Friday, Flowers said her political action committee, Women of Color Vote PAC, will be open to recruit and support women in both parties to run for the Legislature and other down-ballot races.

After watching women making gains in the Legislature and Congress over the past two decades -- without ever reaching parity with the number of men -- Flowers said the number of women in politics remains "paltry."

"We need to focus on equity," Flowers said. "We've achieved equality, everybody recognizes and gets in trouble when they say something adverse about women being equal and having equal capability of doing anything.

"So we've achieved equality in that sense but now we need to go back and figure out, how do we achieve equity when so many women over the decades, especially women of color, have been held back from achieving and putting the equality of their capabilities to work?" 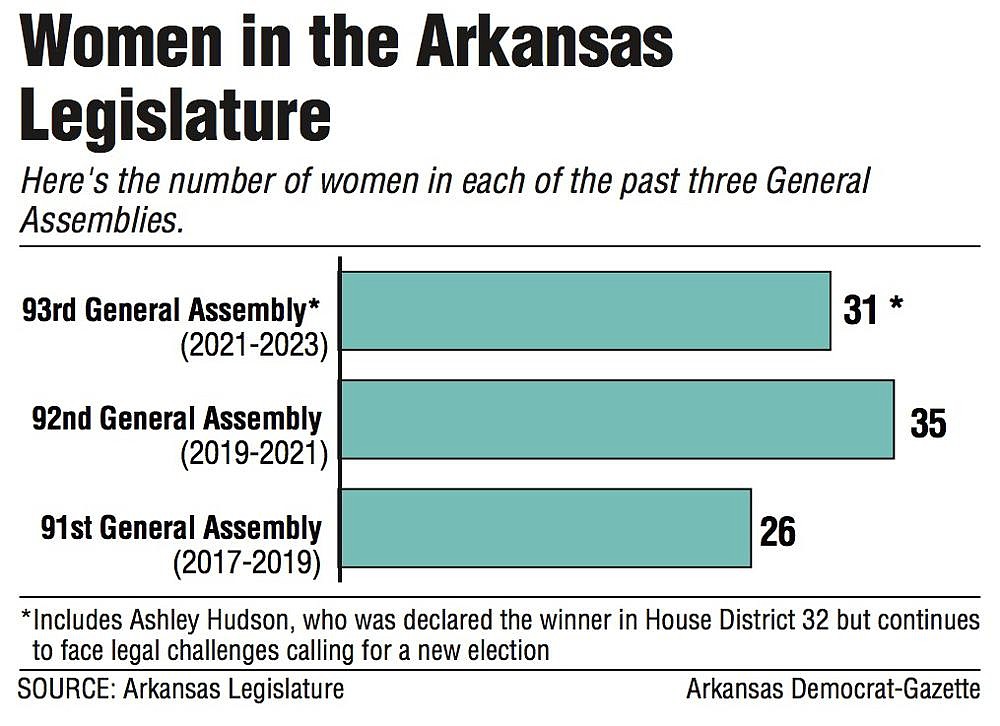 Women in the Arkansas Legislature
ADVERTISEMENT