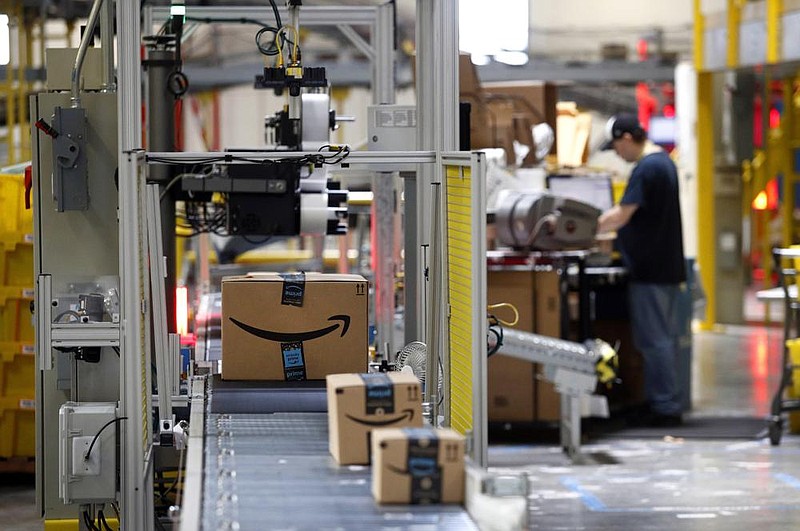 Packages pass through a scanner at an Amazon fulfillment center in Baltimore in this file photo. (AP)

Sales -- nearly all of which took place on Amazon's Marketplace platform for third-party merchants -- climbed as the pandemic sent families indoors. By autumn, the Vashon Island software engineer believed his game had gained traction among parents looking for an indoor activity for cooped-up children.

But the holidays, he said, are when makers of card and board games score as much as three-quarters of their annual sales.

"This is the most important time for us to sell everything we can," he said. "Any bit of trouble from the selling platform affects us a lot for the rest of the year."

And this year, he said, he's had plenty of trouble.

Mickelson and other merchants selling goods on Amazon say the company's limits on the quantity of inventory they can store at the commerce behemoth's fulfillment centers, combined with lengthy shipping delays, have led to extra costs and missed opportunities during the largest online shopping season ever.

Amazon instituted inventory limits in the summer to avoid a repeat of the logistics scramble that snarled deliveries to shoppers early in the pandemic. The limits restrict most sellers to keeping either 200 units or roughly one to three months of product on hand at Amazon warehouses. Previously, sellers in good standing had not faced limits on how much merchandise they could keep at Amazon warehouses.

"We're literally making shipments every other day to make sure we can get things checked in [to Amazon's warehouses] on time to meet demand," Mickelson said.

Even so, the $17.99 Hasty Baker game -- roughly 2,000 copies have sold this year -- has gone out of stock on Amazon "plenty of times," Mickelson said. "I have no idea how much better it would sell if we didn't have the hiccups we've had."

Still, Amazon is doing at least as well as others in the logistics sector at managing this year's wave of online holiday shopping, industry experts say. UPS, FedEx and the U.S. Postal Service have taken drastic measures to keep their operations afloat amid a crush of holiday mail.

And Amazon merchants have reaped big benefits from the pandemic-driven surge in online shopping. Third-party merchant sales are up 60% this holiday shopping season compared with the same period last year, according to Amazon.

An Amazon spokesperson declined to comment on the merchants' concerns.

By beefing up its fulfillment network, Amazon has managed to skirt some of the delivery woes plaguing the nation's largest logistics providers, said Amazon Marketplace consultant James Thomson.

UPS and FedEx announced restrictions on large-volume retail shippers, including Macy's, Nike, LL Bean and The Gap, in early December. The U.S. Postal Service is experiencing so many delays it expects to deliver millions of Christmas packages after today.

Meanwhile, since the pandemic started, Amazon has poured billions of dollars into hiring 400,000 workers, expanded its warehouse capacity by 50% and increased its covid-19 precautions. As of July, the company has been delivering the vast majority of its own parcels.

Amazon also announced early this week that it will suspend a planned increase on warehouse fees for third-party sellers and lift some storage limits for high-performing merchants in the new year.

But for many of the 1.7 million Marketplace vendors relying on Amazon to meet holiday sales goals, the company's inventory limits have still generated major headaches.

Long lag times for shipping to Amazon warehouses mean that even if sellers try to replenish inventory as soon as it's sold, it can sometimes take weeks for those goods to appear available to online shoppers.

"Our top seller, a laptop dock, we only have a week left in stock at Amazon," said Bernie Thompson, the founder of Redmond-based electronics goods brand Plugable Technologies, which sells 95% of its merchandise on Amazon. "We're trying desperately to get goods in. But we can't get it fast enough. And if we can't get goods in to Amazon, our company doesn't have revenue."

Because every corner of the logistics sector is overwhelmed, Thompson said, UPS carriers keep missing delivery windows to pick up new merchandise from Plugable's California warehouse to deliver to Amazon. To stay on top of demand, Plugable is sending a larger number of smaller shipments, boosting the company's shipping costs.

"Overall, our sales are up year-over-year," Thompson said, by about 20% this fall. "Within that, we're missing opportunity all over the place."

Amazon's inventory limits have made it harder to launch new products, said Kade Hansen, the co-owner of dietary supplements company Zeal Naturals, based in Provo, Utah. If a product becomes popular, it risks selling out, Hansen said. Many merchants believe Amazon's search ranking algorithms penalize them for going out of stock, making it less likely a customer will find and buy a product.

"We are almost scared to do well because then we're out of stock for two or three days," Hansen said of new product launches. Amazon does not share details of how it ranks products.

Sales, Hansen said, are up nearly 50% over last year during the holiday shopping season. But Zeal's shipping costs roughly doubled this year after the company, hoping to improve the speed at which it restocks items, switched to a new carrier that gets their products checked in at Amazon's warehouses more quickly. The company is also paying an extra $5,000 to $10,000 a month to store excess inventory outside of Amazon warehouses, Hansen estimated.

Some sellers, frustrated with trying to navigate Amazon's inventory limits, have struck out on their own. Mickelson, for instance, set up a Shopify storefront to sell goods directly from the Hasty Baker website, and orders are fulfilled by startup Deliverr.

But anyone who chooses not to use Amazon's fulfillment network, Thomson said, is at the mercy of the rates and shipping backlogs of major national carriers. And Amazon sellers fulfilling their own orders risk losing their Prime badge, which can cause sales to fall.

"As bad as things are for sellers selling on Amazon, if you can get the inventory in to Amazon, you're in a much better position than if you tried to fulfill orders yourself," Thomson said.