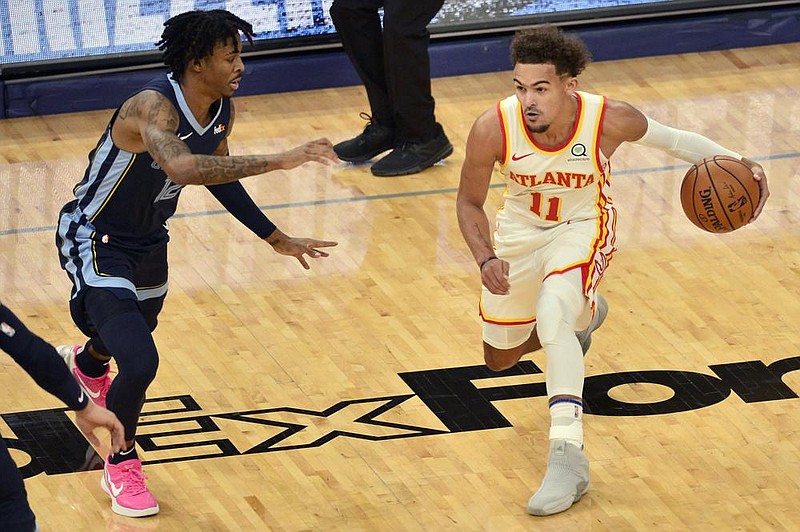 Atlanta guard Trae Young (right) handles the ball Saturday while being guarded by Memphis guard Ja Morant during the Hawks’ 122-112 victory over the Grizzlies at FedEx Forum in Memphis. Young scored eight consecutive points down the stretch and finished with 36 points. (AP/Brandon Dill)

Kevin Huerter added 21 points for the Hawks, who won their second in a row. De'Andre Hunter finished with 15 points and rookie Nathan Knight added 14 points, going 4 of 5 from the floor and 2-for-3 shooting from three-point range.

Ja Morant led Memphis with 28 points and seven assists, and Kyle Anderson finished with 20 points and 14 rebounds. Dillon Brooks added 19 points before fouling out in the closing seconds.

Huerter said the goal was to stop the Grizzlies' transition game and keep them out of the paint, where they are one of the best teams in the league.

"For the most part, I think we did a pretty good job at that. We tried to turn a lot of them into shooters," Huerter said, later adding: "Trying to keep them out of the paint, and we did our thing offensively."

The game was a showdown between two of the league's top young point guards in Young and Morant, both of whom had big season-openers. Young had 37 points in the Hawks' 124-104 win at Chicago, while Morant scored a career-high 44 in a home loss to San Antonio.

Young, who was limited to 12 points in the first half, scored 10 points in the final 2:40 against the Grizzlies, starting with the eight in a row to keep Memphis from overtaking Atlanta.

"I think shots just went down," Young said of the second half. "I was getting some really good looks in that first half. Shots just weren't going in. For all of us. ... I think we got the rust off (in the first half) and played really well as far as scoring throughout the rest of the game."

The young guards carried their teams through the first half, with the Hawks also getting an early burst from Huerter, who had 13 points at the break, hitting all five of his shots.

"We're both young talents trying to be the face of the league," Morant said. "We've played against each other many times. ... The sky's the limit for (Young)."

CHARLOTTE, N.C. -- Shai Gilgeous-Alexander hit a tiebreaking jumper with 1.4 seconds left and finished with 24 points, helping the Oklahoma City hold off a furious rally by Charlotte.

Gilgeous-Alexander then took the inbound pass, brought the ball up the floor and pulled up from 23 feet to drain a contested jumper over Caleb Martin from the top of the key.

George Hill was 8 of 9 from the floor and finished with 21 points, and Darius Bazley and Luguentz Dort each had 15 points for the Thunder after their first scheduled game against the Rockets was postponed earlier in the week.

Terry Rozier, who had 42 points on 10 three-pointers in Charlotte's loss to the Cavaliers to open the season, had 19 points to lead the Hornets, but his desperation heave at the buzzer fell short.

WASHINGTON -- Orlando beat Washington, overcoming a triple-double by Russell Westbrook in his home debut for the Wizards.

Westbrook had 15 points, 15 rebounds and 12 assists to become the fourth player in NBA history to record a triple-double in his team's first two games. Magic Johnson (twice), Jerry Lucas, and Oscar Robertson previously accomplished the feat. Westbrook is the first player to do it with a new team after being acquired from Houston in the off-season for John Wall.

Terrence Ross scored 25 points to lead Orlando. Nikola Vucevic had 22 points and 17 rebounds, and Markelle Fultz added 21 points to help the Magic win its second in a row to start the season.

Bradley Beal had 39 points for the Wizards, while Thomas Bryant had 19.

Westbrook had just two points at the half finished shooting 6 for 19 from the floor.

The Cavs took advantage of Detroit wasting opportunities to win in regulation and the first overtime, improving to 2-0 and dropping the Pistons to 0-2.

Cleveland center Andre Drummond had 23 points and 16 rebounds, Darius Garland added 21 points and 12 assists, and Cedi Osman had 22 points. Kevin Love, who scored 15 points, returned after missing the opener with a calf injury and JaVale McGee had 11 points off the bench for the Cavs.

Jerami Grant had 14 of his 28 points in the third quarter, when the Pistons took control before blowing it, and Blake Griffin finished with 26 points. Detroit's Derrick Rose had 13 points, missing 11 of 15 shots, and had some costly turnovers.

DeRozan's three-pointer with a minute remaining pulled the Spurs within 114-113, and they took a 115-114 lead on LaMarcus Aldridge's put-back with 29.9 seconds remaining.

Toronto's Kyle Lowry missed a pull-up 19-footer with 22.3 seconds left, and Rudy Gay made two free throws at the other end.

Fred VanVleet had 27 points and Chris Boucher added 22 points for the Raptors in their first road game.

CHICAGO -- Domantas Sobonis had 22 points, 11 assists and 10 rebounds, and Indiana used big scoring runs in the second and third quarters to cruise to a victory over Chicago Bulls.

T.J. Warren scored 23 points and Victor Oladipo added 22 as Indiana beat its Central Division rivals for a 10th consecutive time, including five in a row at the United Center.

Ben Simmons had 15 points, 9 rebounds and 6 assists while also leading the defensive effort that forced New York's RJ Barrett into a miserable shooting performance. Embiid and Simmons have never dropped a game at MSG and the Sixers have won the last 13 meetings overall.

Julius Randle scored 25 points for the Knicks, who fell to 0-2 under Tom Thibodeau. Barrett, after a 26-point opener, shot 2 for 15 and had 10 points. 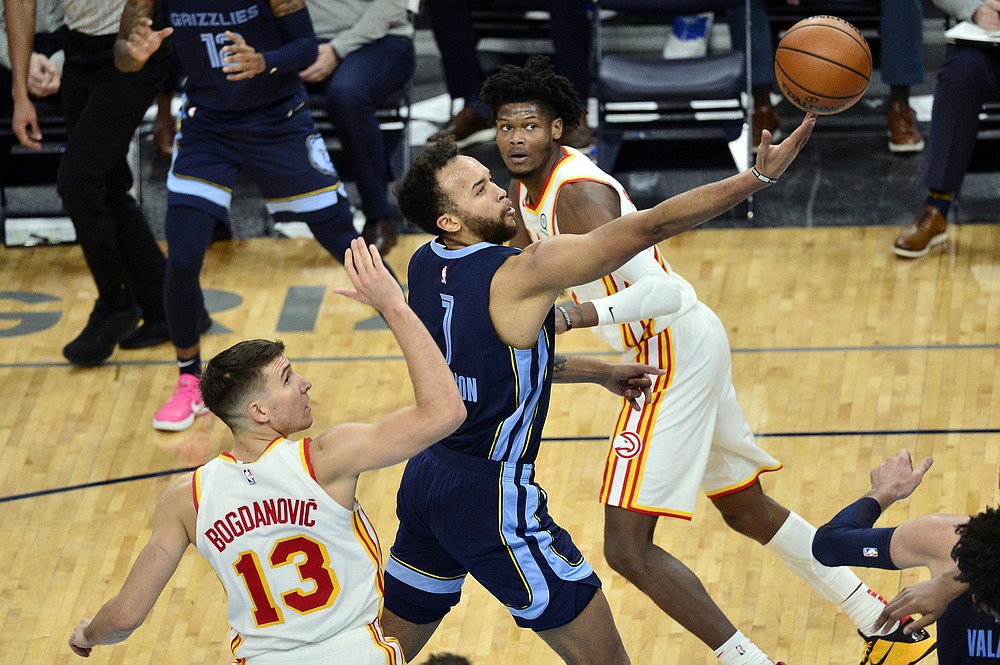 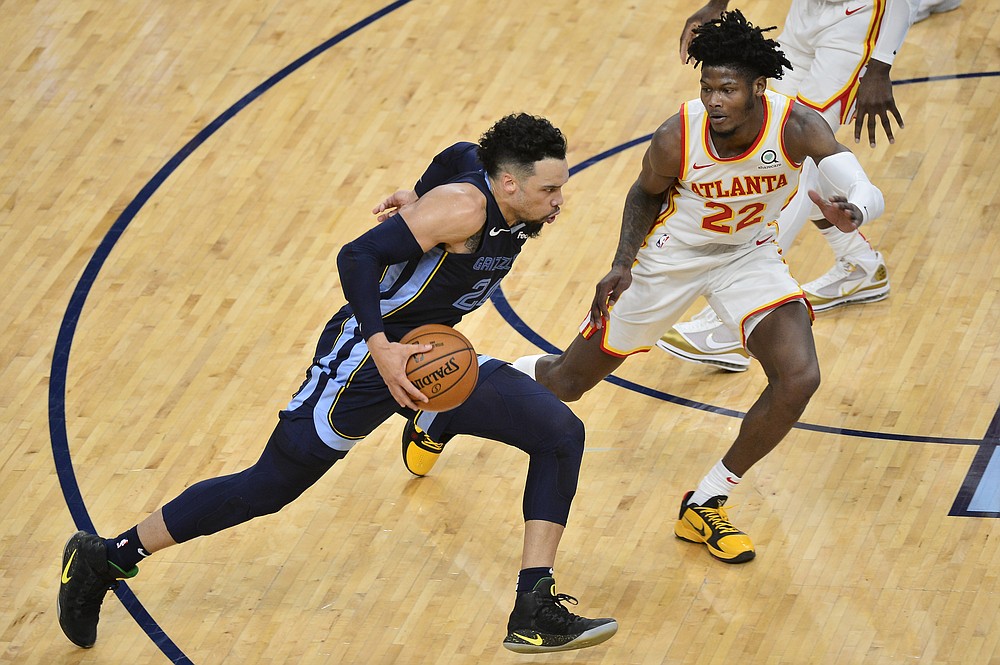 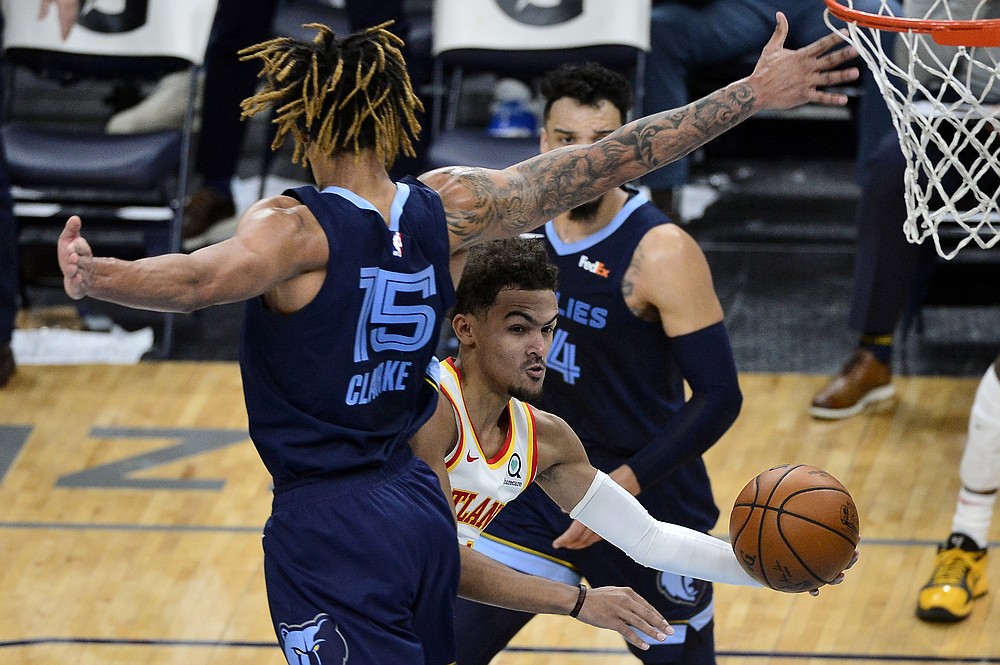 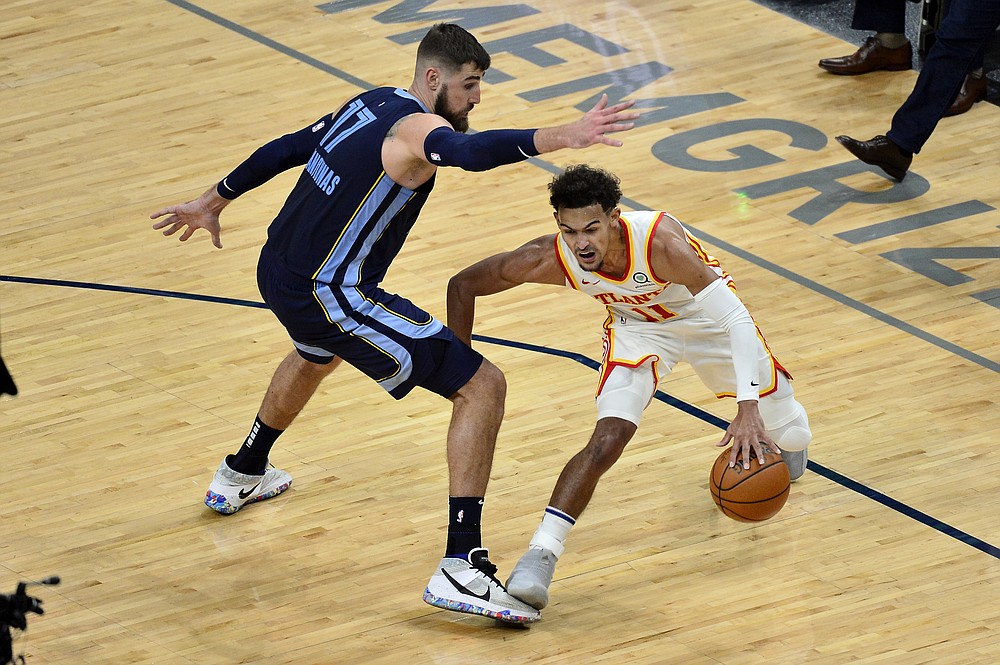 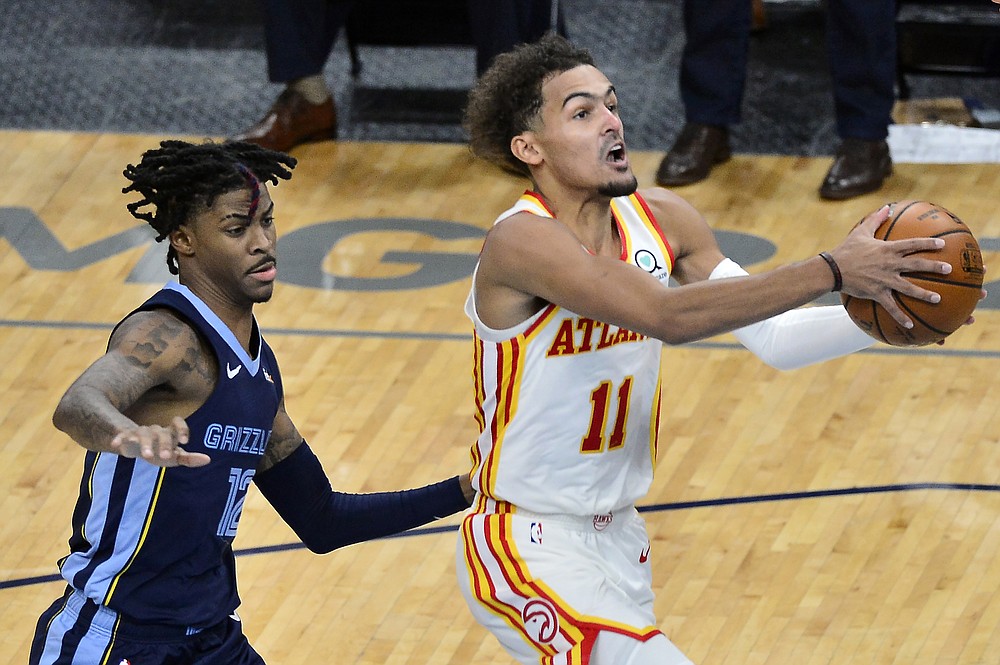 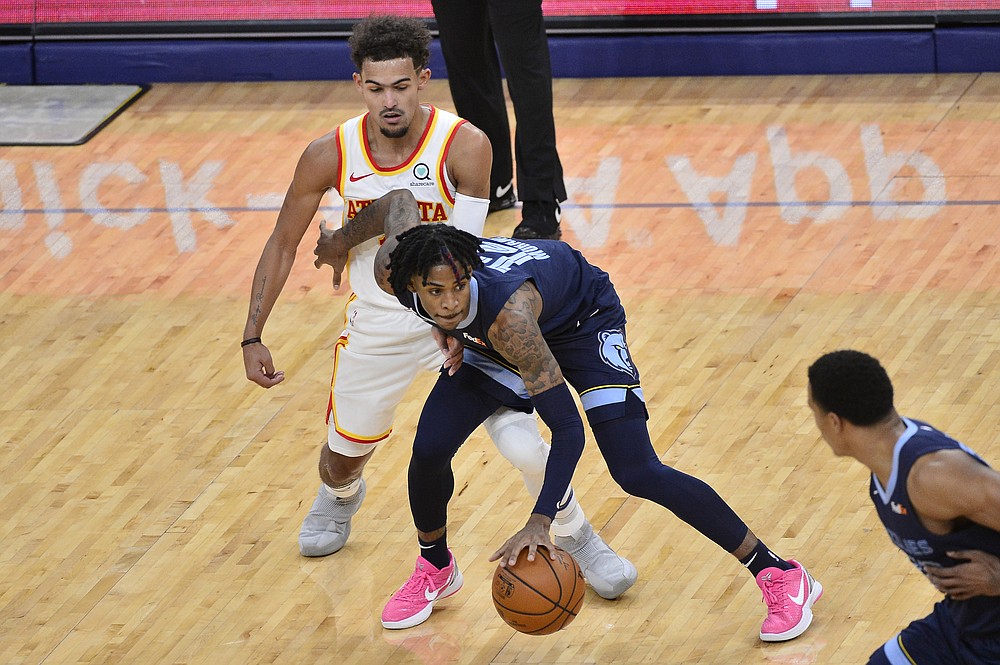 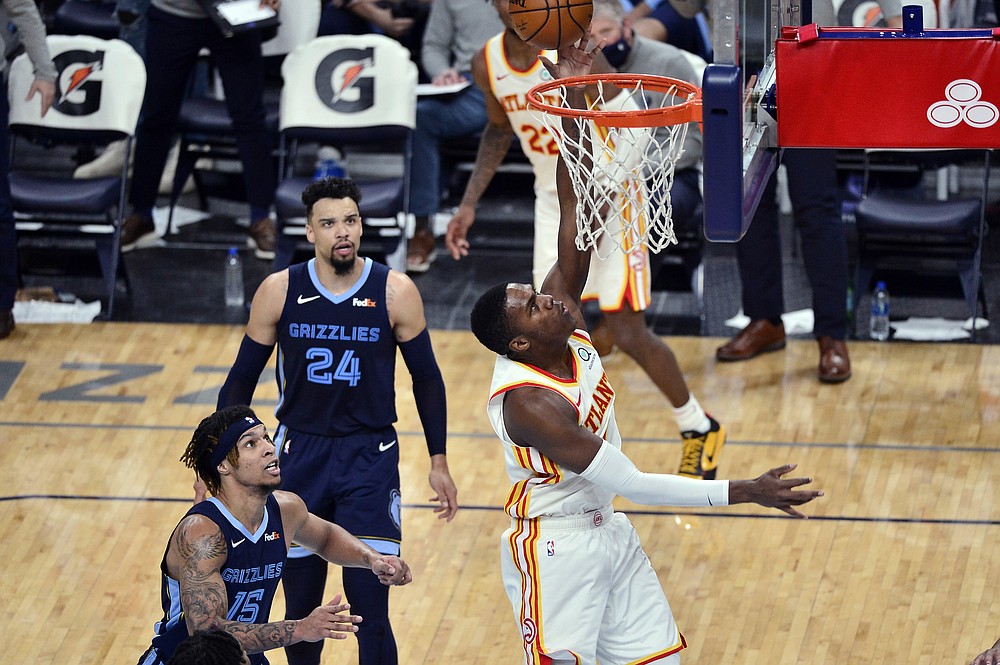