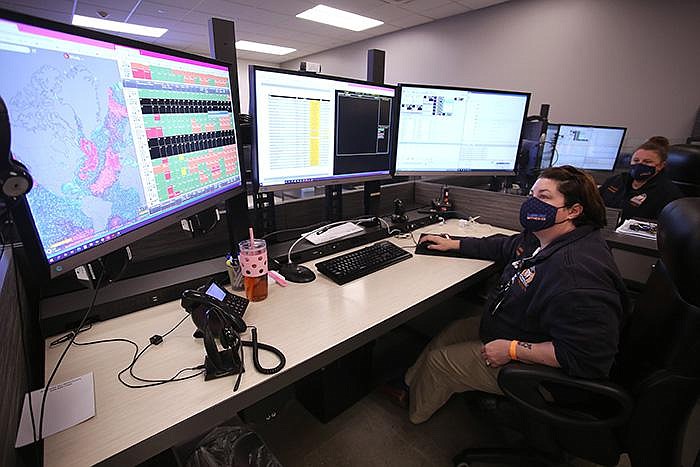 Many Arkansas emergency medical services are seeing increased call volume and hospital wait times going into the winter months of the pandemic, magnifying long-standing staffing and funding issues in the industry.

Starting Dec. 18, front-line emergency workers around the state began receiving their first round of covid-19 vaccinations, officials said. However, this milestone is far from the end of the fight against the coronavirus pandemic, said Mack Hutchison, quality manager and paramedic at Metropolitan Emergency Medical Services of Little Rock, which serves around 550,000 residents of Central Arkansas.

"I had no complications. I was very pleased with how it turned out and how quickly they got these vaccines out to first responders," Emerson EMS emergency medical technician Don McIntire said about receiving the vaccine. "Everything is new. Everything is ongoing. So, it's still hard to foresee if it will ease up. I think we're three or four months away from even trying to think about something like that."

All the same, sanitation and personal protective equipment precautions will stay in place for the foreseeable future to protect patients and responders, many service providers said.

The virus brought unique challenges, such as enhanced emergency service provider and public safety requirements and longer travel distances. However, many challenges facing the industry were looming before the pandemic reached U.S. soil, and none are limited to Arkansas.

"We understand the fragile nature of the EMS system in the country," said Greg Brown, branch chief of trauma, public health preparedness and EMS for the Arkansas Department of Health. "We have staffing issues, retention is a problem. That's not unique to Arkansas. That's nationwide. Some systems are collapsing in some states simply because of the pressure they are under. We're not there yet."

In early spring, services actually saw a drop in overall call volume, according to Arkansas Department of Health data, which several responders attributed to the shutdowns and fears due to the pandemic.

"I've seen a lot a more people that need to go to the hospital refrain from it," said Blake Norwood, an EMT in Hot Springs. "I had a man who fell and hit his head. There was a lot of blood and potential for a brain bleed – something that can kill you – but he was more worried about never coming home because he thought he'd catch covid at the hospital. Another lady fell and broke ribs. You could tell she was in pain. She needed to go, but again, she was terrified."

"Early in the game, our volume dropped. Medics were in utopia. What else? We were heroes. We're front-line heroes. Everyone we know was sending food over," Hutchison said.

That respite didn't last long. Call volume rose steadily from April to July, reaching 44,481 -- a 26% increase and above both 2019 and 2018 numbers. The state's call volume has remained higher than average with many services reporting increasing volume the past few months.

"We don't know the reasons for the spike recently. We have covid patients every day, but I don't know if you can contribute all of that to covid,"said Toby Emerson, owner of Emerson Ambulance Service, which serves Craighead and Mississippi County.

The increased volume contributed to long "on the wall time," or the time it takes patients to transition from the ambulance to a bed once outside a hospital.

Some providers around the state reported wall times of up to five hours. This has not been as much of an issue with larger providers and hospitals, especially in the Little Rock and Northwest Arkansas hubs, providers in those areas said.

"A big strain is the fact that, to handle that and keep from opening these surge facilities, ambulances are now moving patients hundreds of miles from their normal operating area," said Ken Kelley, president and CEO of ProMed Ambulance and government affairs chair for the Arkansas Ambulance Association.

This time adds up to less available ambulances and slower response to subsequent emergency calls.

Emerson and other emergency medical service providers said they are working closely with hospitals to reduce wall time and stay ahead of the curve.

A program called CovidComm launched this month through MEMS, which tracks bed space and acceptance at 39 hospitals in the system. It helped direct 110 covid patients and 56 hospital transfers in its first seven days. Any emergency medical services provider in the state can use the system.

The Department of Health has relaxed some emergency medical services regulations during the pandemic to give services more control and reduce paperwork, Brown said.

Those on the front lines, more than anything, said they were tired. The mental stress is as bad as the physical stress of the added workload, said Tonia Hall, President of the Arkansas EMT Association and manager of North Star EMS in Searcy.

"We're dealing with a lot of covid patients, which requires [decontaminating] the truck and wearing PPE...it's a priority not only for the patients but for ourselves and our families," McIntire said. "This task becomes very tiresome, for lack of better words, because it's an ongoing event."

McIntire, who also works as fleet supervisor and over maintenance at Emerson, ensures decontamination equipment is in order and everyone is using it correctly, he said. After much training, it takes about 10 minutes between dropping off a patient at the emergency room to being ready for another run, he said.

"It's increasingly stressful," McIntire said about working during the pandemic.

Covid-19 guidance for emergency medical workers is to wear gloves, a gown, a mask and goggles or a face shield when around someone possibly exposed, according to the Health Department's website.

"We're going above and beyond what's required by the CDC," said Jon Swanson, executive director of MEMS, echoing what many providers said.

Even with these precautions, many services have reported that multiple employees have tested positive for covid-19. One Arkansas worker has died of the virus. LifeNet paramedic Shon Matthews, 48, of Fouke was hospitalized in September and died Nov. 2, according to LifeNet's website and news reports.

At MEMS, around 40 employees have tested positive or quarantined due to possible exposure since March. None of the cases have been linked to at-work exposure or any patient exposures, said Angela Bain, a communications training officer who has also been overseeing internal cases.

Some service providers, including MEMS, have had a few employees quit or retire early this year with covid-19 being a known factor in their decision. But there hasn't been a mass exodus, Swanson said.

Kelley said volunteer and part-time emergency medical workers had to stop working because of cross-contamination concerns, leaving some services with only two-thirds of their workforce.

"We hope that now there's a vaccine out, that maybe some of this will be able to get under control soon and the workload on EMS won't be as bad," Hall said. "Often EMS is overlooked. They're still out there fighting the front line every day. They're basically doing twice the workload for the same pay as before."

The median annual wage for EMTs and paramedics was $35,400 in May 2019, according to the U.S. Bureau of Labor Statistics. Pay continues to be an issue for EMS, Swanson said.

"That helped, to some degree, stabilize the workforce," Kelley said. "But since then, there's really been no other stimulus funds."

"Our rural service have a very unique perspective. They have different, while also some of the same, challenges than some of our larger EMS services," said Brown, who worked as a paramedic in a rural areal. "Certainly, our private services have different challenges than community-based services or city-owned... It's hard to paint this industry with a broad brush. What doesn't seem like a big deal to a larger service, could be catastrophic to a smaller ambulance service."

The biggest differences between services may be whether they operate in a more urban or rural part of the state.

Because the EMS systems are based on fee for service, they do not get paid if the ambulance does not take a patient to a hospital. Insurance reimbursement rates have not adjusted while costs keep going up, Kelley and others in the industry said.

This also makes it difficult for less populated areas where the call volume isn't high enough to properly support an ambulance service. About 52 out of 75 counties fall into this vulnerable category, Kelley said.

"We're there every day in the communities. People expect us to be there. If this pandemic continues, communities are going to have to take a real serious look at how they maintain those levels of services," he said.

Some communities have moved towards subsidizing that funding.

Perry County -- with a population of 10,455 -- has faced issues keeping paramedic-level ambulances. It can take hours for an ambulance to show up, if one can make it at all, said Leslie Lovell, the county's EMS board president.

It voted in November to implement a permanent 0.5% sales and use tax dedicated to providing emergency services in the county. A volunteer ambulance program also exists within the Perryville Volunteer Fire Department.

"There were a lot of counties worried about losing these services, then you throw on top of that covid. It's a big strain on the system. From a county standpoint, all the stress we had before is getting compounded," said Mark Whitmore, chief legal counsel with the Arkansas Association of Counties.

In the state, only 30% of available EMT educational spots are being filled, according to an Ambulance Association June survey. The association estimates Arkansas will lose 300-400 paramedics who will choose not to re-license in March.

"If we're only turning out 100 and losing 300, it doesn't take long to realize that seesaw is out of balance," Kelley said.

Recruitment isn't an issue for MEMS, which has its own training program, Swanson said. It's able to provide free training for EMTs and paramedics, provided they work for the service after graduating.

Those in emergency medical services are people with type A personalities who want to be first on the scene to fix the problem, he said.

"This shirt doesn't fit everybody," Swanson said. "The nature of what we do is when we're in it, we stick with it. There's nobody else coming."

CORRECTION: The population of Perry County is 10,455. An earlier version of this story had an incorrect number.