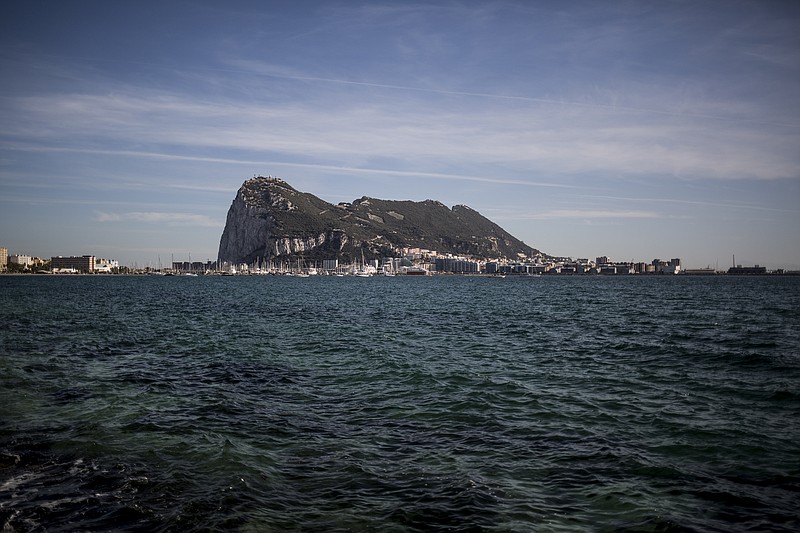 FILE - In this Thursday, Oct. 17, 2019 file photo, an eerial view of Gibraltar rock seen from the neighbouring Spanish city of La Linea, during a general election in Gibraltar. (AP Photo/Javier Fergo, File)

BARCELONA, Spain -- While corks may have popped in London and Brussels over the end to a four-year saga known as Brexit, there is one rocky speck of British soil still left in limbo.

Gibraltar, a British colony jutting off the southern tip of Spain's mainland, wasn't included in the Brexit trade deal announced on Christmas Eve between the European Union and the United Kingdom to reorganize the commercial and trade relations between the now 27-member bloc and the first nation to exit the group.

The deadline for Gibraltar remains Friday, when a transitionary period regulating the short frontier between Gibraltar and Spain expires. If no deal is reached, there are serious concerns that a hard border would cause disruption for the workers, tourists and major business connections across the two sides.

Spain succeeded in persuading the EU to separate the issue of Gibraltar from the greater Brexit negotiations, meaning that Madrid is handling all talks directly with its counterparts in Gibraltar and London.

Spanish Foreign Minister Arancha Gonzalez Laya said Thursday that if an agreement isn't reached, she fears that the long lines of stranded truck drivers seen at the English Channel crossing this past week could be repeated.

"We do not have much time, and the scenes of chaos from the U.K. must remind us that we need to keep working to reach a deal on Gibraltar," Gonzalez Laya told Spanish state broadcaster RTVE. "Spaniards want one, the people of Gibraltar want one, now the U.K. needs to desire one as well. Political will is needed."

Throughout the Brexit talks, Spain has insisted it wants a say on the future of Gibraltar.

The Rock was ceded to Britain in 1713, but Spain has never dropped its claim to sovereignty over it. For three centuries, the strategic outcrop of high terrain has given British navies command of the narrow seaway from the Mediterranean Sea to the Atlantic Ocean.

"Neither side is going to renounce its pretensions of sovereignty, but we must set that aside to reach a deal that makes lives easier for those living on both sides of the border," Gonzalez Laya said.

Negotiations with the U.K. are ongoing, Gonzalez Laya said Monday, adding that she believes "a deal in principle is perfectly possible" by the end of the year.

"The best sign that Spain is really trying to reach an agreement is that it is not discussing [the negotiations] in public," she said during an online news conference.

More than 15,000 people live in Spain and work in Gibraltar, making up about 50% of Gibraltar's labor force. Gibraltar's population of about 34,000 was overwhelmingly against Britain leaving the European Union. In the U.K.'s 2016 Brexit referendum, 96% of voters in Gibraltar supported remaining in the continental bloc that they feel gives them more leverage to deal with the government in Madrid.

Gibraltar Chief Minister Fabian Picardo said the post-Brexit trade deal "is a huge relief given the potential difficulties that a no-deal Brexit might have created for the United Kingdom and the European Union."

But he added that his territory is still at risk.

"This deal does not cover Gibraltar. For us, and for the people of the Campo de Gibraltar around us, the clock is still ticking," Picardo said in a statement.

"We continue to work, hand in glove with the United Kingdom, to finalize negotiation with Spain of agreement for a proposed treaty between the EU and the U.K. in relation to Gibraltar," he said.

British Prime Minister Boris Johnson's government also said it's committed to finding a solution that includes "ensuring border fluidity, which is clearly in the best interests of the communities that live on both sides." 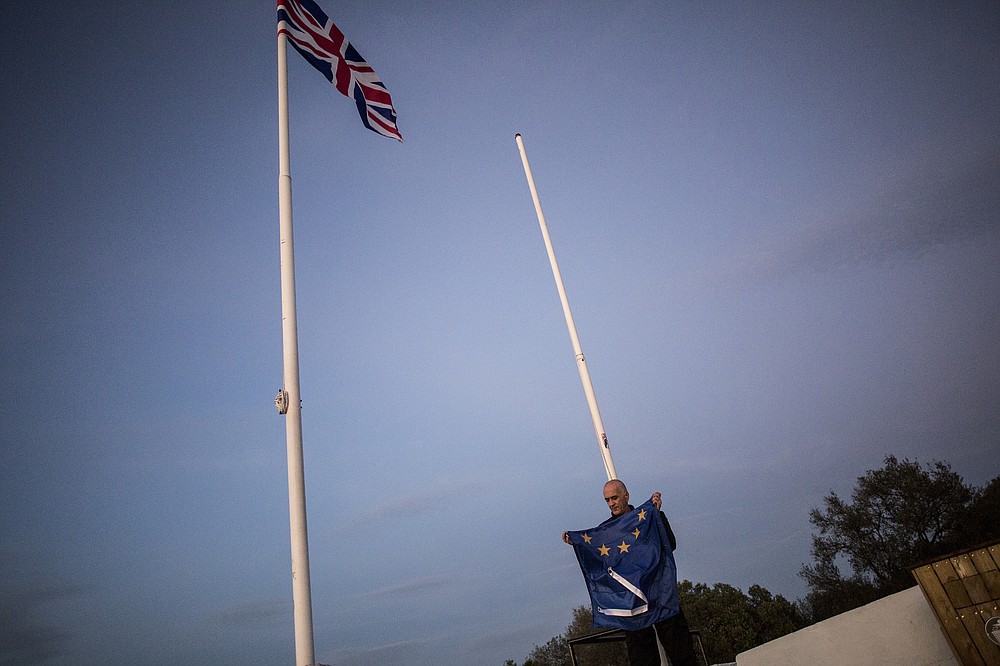 FILE - In this Friday, Jan. 31, 2020 file photo, a worker folds the EU flag after being lowered at the British territory of Gibraltar. While corks may have popped in London and Brussels over the end to the Brexit negotiations, there was one rocky speck of British soil still left in limbo. Gibraltar, a British colony jutting off Spain’s southern tip, was not included in the deal announced on Christmas Eve between the European Union and the United Kingdom to reorganize the commercial and trade relations between the now 27-member bloc and the first nation to exit the group. (AP Photo/Javier Fergo, File)
ADVERTISEMENT