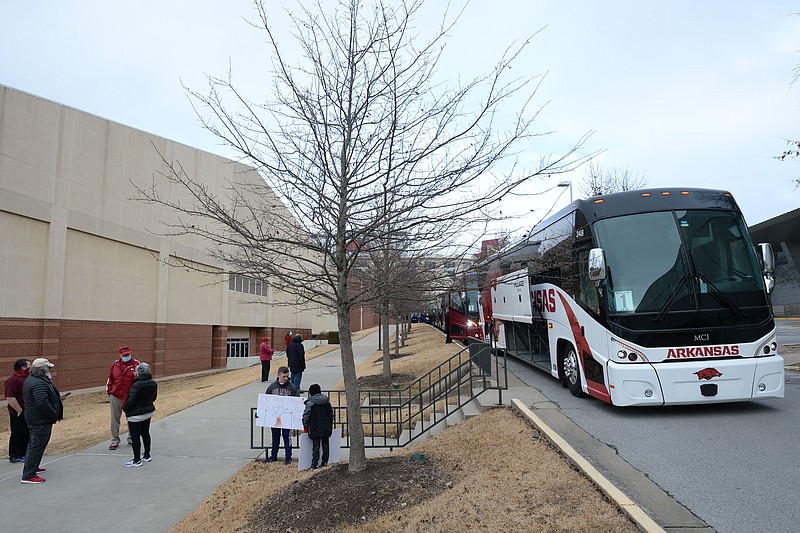 Fans gather Tuesday, Dec. 29, 2020, near a long line of buses south of Razorback Stadium on the University of Arkansas campus in Fayetteville as they wait to cheer on the Arkansas football. The buses were there to take the Arkansas football team to the Northwest Arkansas National Airport to play in a planned bowl game with TCU. The game was canceled moments before the team was scheduled to leave.

FAYETTEVILLE — Arkansas’ matchup with TCU in the Texas Bowl on Thursday has been canceled.

The game was canceled due to an increased number of positive covid-19 tests and other circumstances within the Horned Frogs' football program, according to a release.

Arkansas will not play a replacement opponent in the game that was originally scheduled to kick off at 7 p.m. at NRG Stadium in Houston. The Razorbacks' final season record is 3-7 against all SEC opponents.

"Over the last 24 hours, between a combination of COVID-19 related issues, injuries and other circumstances, we have fallen below the established Big 12 Conference threshold for student-athlete availability that we have abided by all season," TCU athletics director Jeremiah Donati said in a statement. "As such we very regrettably will not be able to participate in Thursday night’s Mercari Texas Bowl against Arkansas.

Like the SEC, the Big 12 set a minimum threshold of 53 players needed to compete in a game this season. The Big 12 also allowed a team to cancel or postpone a game if it had fewer than 7 offensive linemen, 4 defensive linemen and 1 quarterback.

TCU did not specify which threshold triggered the cancelation of the bowl game.

Arkansas' players were set to depart the Fred W. Smith Center for Northwest Arkansas National Airport at 12:30 p.m. Tuesday, but buses sat idle for nearly an hour before departing without anyone on board. The game was canceled shortly afterward.

“We are very disappointed not to get the opportunity to compete again as a team," Arkansas coach Sam Pittman said in a statement. "We were excited and wanted to go play TCU in the Texas Bowl, but we certainly understand the issues in the TCU program. We had no positive tests from yesterday and were ready to go to Houston this afternoon with a healthy team.

"Our team and our student-athletes have sacrificed a lot over the last several months, including over the holidays, so this is a tough way to end our season. I’m so proud of our team for fighting and handling themselves through adversity all year.”

The Razorbacks are the fourth SEC team unable to play in the bowl game they were selected for this year, joining South Carolina (Gasparilla Bowl), Missouri (Music City Bowl) and Tennessee (Liberty Bowl). All three of those teams backed out of their bowl games because of covid-19 numbers on their own team, not the opponent's.

The Razorbacks were set to play in their first bowl game since 2016 when they lost to Virginia Tech in the Belk Bowl. Arkansas was going to play in the Texas Bowl for the second time and in a Houston-based bowl game for the third time.

It is the second time this year TCU had to cancel a game due to covid-19 numbers. The Horned Frogs' season opener against SMU was canceled in September.

TCU finished the season with a 6-4 record, including a 5-4 record against Big 12 teams. The Horned Frogs won three straight and five of their last six games.

Arkansas had games postponed because of the virus during the regular season, but the Razorbacks were able to reschedule those games and complete their 10-game schedule.

CORRECTION: An earlier version of this story incorrectly stated Big 12 minimum roster numbers were based on scholarship players available. It has been corrected.