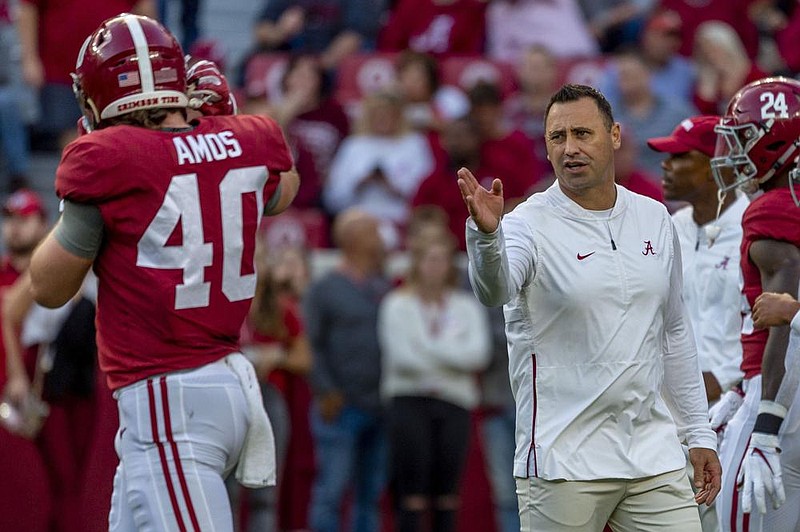 Alabama offensive coordinator Steve Sarkisian was selected as the recipient of the Broyles Award on Monday. The Crimson Tide scored 49.7 points per game — the second-most productive offense in the country — under Sarkisian, who also guided Alabama to a victory over Auburn while Coach Nick Saban was out because of covid-19. (AP file photo)

The Broyles Award & Foundation once had big plans for the 25th ceremony for the Broyles Award, given annually to the nation's top assistant coach since 1996.

But with coronavirus limitations, the silver anniversary was celebrated not with past winners and a grand event, but instead with a virtual ceremony.

"It was completely different [from what we were hoping]," Molly Arnold, Broyles' granddaughter and the foundation's executive director, said. "As the 25th was approaching, we had all these different plans. It ended up being a 15-minute presentation on KATV. It was wonderful, but very different for what we had planned."

The Broyles Award was established in honor of Frank Broyles, the longtime head football coach and athletic director at the University of Arkansas.

"It's an honor anytime you get mentioned with Coach Broyles and the rich tradition and history of this award," Sarkisian said during the ceremony. "He was a tremendous assistant, then head coach and athletic director.

"I'm honored to receive this award on behalf of our program."

Sarkisian guided the No. 2 offense in the country as the Crimson Tide scored 49.7 points per game. Under the former Washington and Southern California head coach, Alabama's offense tore through the SEC and produced two Heisman Trophy finalists in quarterback Mac Jones and wide receiver DeVonta Smith.

Sarkisian -- in his second season of his second stint at Alabama -- also served as interim head coach Nov. 28 after Coach Nick Saban tested positive for covid-19. The Sarkisian-led Crimson Tide topped Auburn 42-13 in the Iron Bowl

On Friday, the 46-year-old coordinator and Alabama will take on Notre Dame in the College Football Playoff semifinals.

"Sark's done an outstanding job in terms of system and scheme, how he teaches the players," Alabama Coach Nick Saban said Monday. "He's contributed as much as anybody that we've ever had here in terms of his knowledge and experience."

Although this year's ceremony lacked the typical pageantry, it did have a special link to the Broyles family.

"Kane's dream was to be a football coach, and it was really special to talk to him and have him share this with his dad, who worked underneath my grandpa," Arnold said. "That was special to us."

For 25 years, the ceremony in any form has celebrated the top assistant coaches in the country. It's something Broyles -- a former assistant coach who molded 27 future head coaches after he became a head coach who won six Super Bowls, five national championships and 40 conference titles combined -- appreciated.

"During the first award in 1996, the assistant coaches were making $150,000, and of course that number has ballooned now," Arnold said. "My grandpa would be so humbled that the role of the assistant coach has been elevated to the status that it should be and is today."