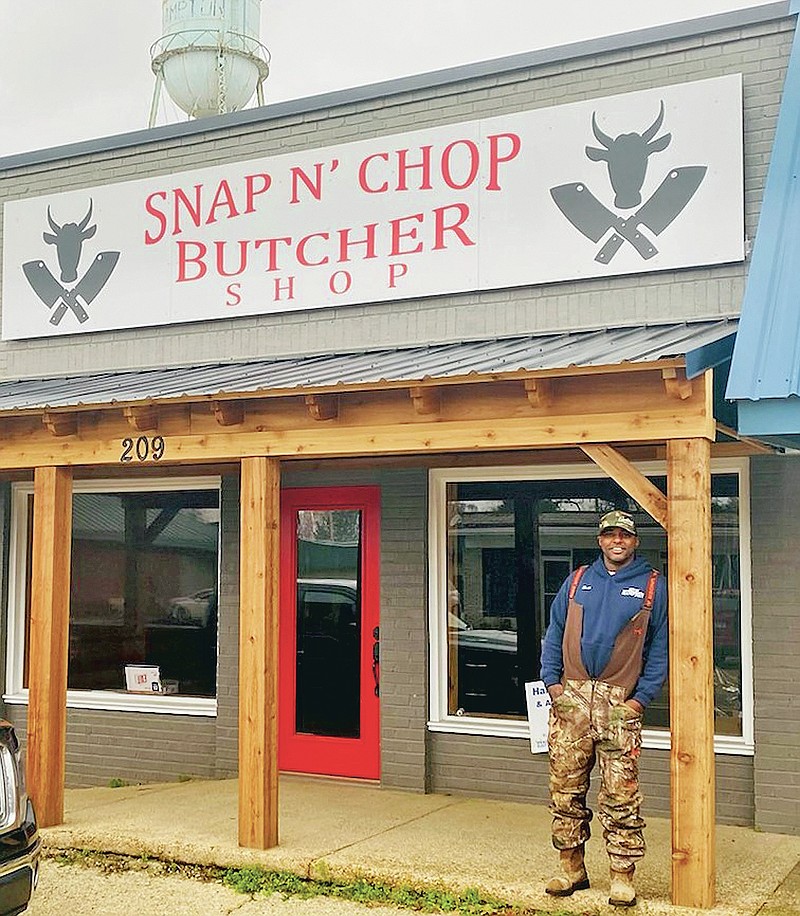 Odie 'Snap' Strong stands in front of his new meat market at Hampton. (Special to The Commercial)

HAMPTON -- Odie "Snap" Strong is known around his hometown of Hampton as the type of fellow who'll try to help anyone in need and supports his community wholeheartedly.

"Back in 2005 I got some drug charges," he said. "I fought it until the middle of '06 when I was convicted with a 20-year sentence. The judge suspended three years of that. After four years in the penitentiary, I was paroled and came home in 2010.

"I had a lot of time to think while I was away and decided that was not the kind of life I wanted. My wife said she wanted to start a restaurant. We had a little money saved so she and another lady went in partners and opened Granny's Grill on Highway 167," Strong said.

Granny's is a dining establishment with a reputation for good country cooking.

Strong said he applied for a job with the city after getting back from prison and went right to work.

As things got going again for him, he and his wife Marcia started looking for a church to join. The first one he went to was the Assembly of God.

"I liked Brother Ricky Smith really well so we joined the congregation and began regular attendance," he said.

"God was so good to us we were able to purchase a food trailer and set it up in Woodbury where folks going to and from work at the defense plants could eat without having to come all the way to Hampton," Strong said.

"I purchased a building next to the 167 red-light at 209 W. Main St. downtown. My wife Marcia said she'd back me with whatever I decided. I was thinking about a chicken shack with different varieties of fried chicken, but we already had two restaurants," he said.

Strong said he has an 80-year-old friend, Hank Welsh, who ran a butcher shop called Town and Country in Hampton for 40 years. And what a friend Welsh has been.

"I asked him if he thought that idea would work again?" Strong said. "He said we don't have a fresh meat outlet here and people are always going to buy good meat products. He said he'd seen how I'm willing to work hard and how I handle my business so he was going to come in and help get me started. He is teaching my help and me everything we need to know about the butcher business from what tools are needed, to the proper way to prepare a quality product."

While juggling his many responsibilities, Strong still retains his job with the city.

"I have another young man besides myself who'll be working in the market," Strong said. "Mr. Welsh says he can tell within two days if a man is going to make it as a butcher. Hank doesn't believe in using a saw on any steaks because of the fat and gristle residue. He had me purchase top-quality knives to do all our steak work."

Strong says his new business has a new walk-in cooler and freezer and all the meat saws, cutting tables and grinding machinery to run a first-rate operation, adding that he will carry a few accessories like a variety of breads, seasonings and a small assortment of canned goods.

"My nickname is 'Snap' so I settled on the business name 'Snap N' Chop.' We're in the final stages of completing the remodel now," he said.