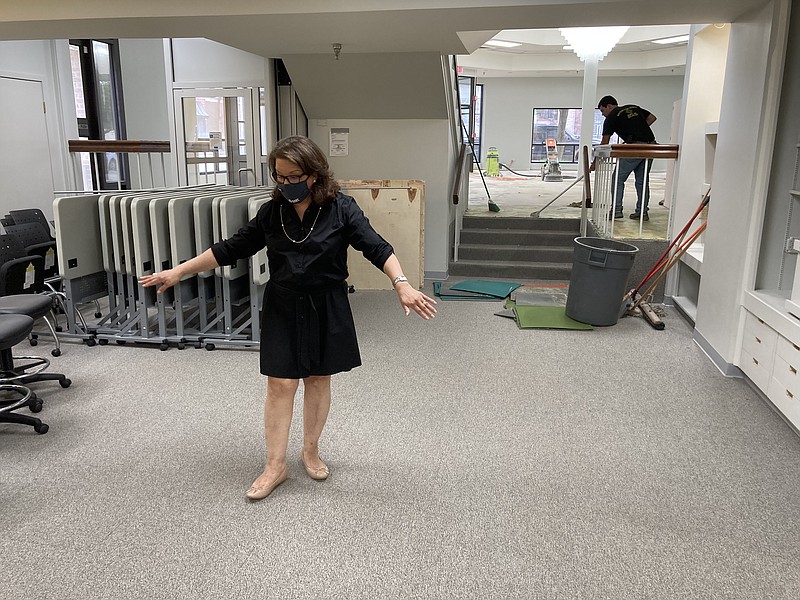 Mildred Franco, executive director of The Generator, says the center will help business entrepreneurs start business or improve the ones they already have. (Pine Bluff Commercial/Byron Tate)

Covid or no covid, Mildred Franco is ready to get moving.

Franco is the executive director of The Generator, an initiative of Go Forward Pine Bluff with the mission of encouraging innovation and entrepreneurship.

With a $400,000 building renovation behind her, one that included several surprising discoveries, Franco said she feels the urgency to start operating the center in the way it was intended. The opening was supposed to happen in April, but covid foiled those plans, so in mid-November, the doors opened to the public for an event to celebrate Global Entrepreneurship Week. She said the event didn't even rise to the level of soft opening.

"We would like to have an opening," she said, adding that speakers were scheduled to come at one time and that perhaps the governor will be able to make it in the future.

"We'll have to dust off that folder and think about that again when it's safely possible," she said.

In the meantime, however, time is wasting in Franco's way of thinking. Consequently, January will be a time when the center sets the stage on a couple of projects, with February being the time for kicking them off.

One way of thinking about The Generator is that it is a learning center aimed at increasing the capabilities of people who want to improve themselves, particularly their entrepreneurial chops, as well as their digital skill sets. In those areas, Pine Bluff is way behind, Franco said.

When she was first hired in the fall of 2017, she was familiar with a regional hub that operates in North Little Rock. She asked Ryan Watley, chief executive officer of Go Forward Pine Bluff, what his vision was for the Pine Bluff innovation hub and whether he wanted her to fashion it after the one on North Little Rock. Watley said not necessarily.

"No, I actually want you to come up with what's best for this community," she recalled him saying.

To that end, Franco conducted a survey and found that where The Generator needed to be was in supporting small businesses.

She said that some communities -- seven in all in the state -- have Arkansas Small Business and Technology Centers, with the closest being in Little Rock and Monticello.

"If people want to start a business here," she said, "they don't know where to go. "

The area is also behind the times in digital training, Franco said.

"There's a big gap in digital skills in Pine Bluff," she said. "Technology is fast-paced. If you're not keeping up with it, you will be left behind."

Some of the problem is that the training isn't happening in the public schools here, Franco said. There are 250 schools in the state that have EAST training, or Education Accelerated by Service and Technology. Students in these programs use technology to solve problems within their communities. Franco said the Dollarway and Watson Chapel school districts have programs, but not Pine Bluff.

Because there is such a need for that type of training, Franco said, she has installed an EAST program at The Generator.

"It's available to schools and the community," she said, "and we will offer training in virtual reality, 3D printing, graphic design and GIS, which is geographic information system mapping, among other applications."

Additionally, Franco has created a "Mini-Maker" space where people can come in and learn laser engraving, digital routing and 3D printing.

"We wanted to start small," she said, "so we'll start there and see how it goes. "

To get that program up and running, Franco has hired a "Makerspace" facilitator, Verna Perry. Perry came to the center with a wealth of construction and manufacturing experience, and during the month of December, she has been training with an expert maker from the Arkansas Regional Innovation Hub to beef up her digital skills. By February, the Mini-Maker space training program is going live with small groups and classes.

For entrepreneurs, there's another plan. Aimed at those who want to start a business or take the one they have had for one to three years to another level or even for those who are having problems with the business they have, there will be a 12-week class, which will meet once a week, part virtual and part in-person, that will include speakers and in-person training.

"We will go through all of the concepts, all of the pieces it takes to create a business," Franco said, "what I call all the fundamentals of creating a business."

Registration for that program will be in January, with classes starting in February.

All that is missing right now is an education programs coordinator, which is not necessarily a teacher, she said.

Another important aspect of The Generator is the area set aside for these different cohorts to get together and share ideas. There are co-working spaces that can be used in that way, she said, and there will be comfortable seating and a coffee lounge, as well as a 1-gigabyte internet network.

Franco said she has been patient with the conditions dictated by the covid-19 pandemic but that, with care, she believes she can move forward.

But just getting the building ready to operate as The Generator has been its own kind of struggle. The three-story building, located across Fifth Avenue from Simmons Bank, was built in 1937 and operated as the Merrill Community Center for decades, complete with a pool on the first floor and full basketball court on the top. The downstairs was renovated in the early 1970s, and the building was used as a jewelry store.

Simmons, the most recent owner of the building, donated the structure to Go Forward Pine Bluff to be used as The Generator.

The renovation, which started in November 2019, took place on the first and second floors, but the top floor is still a basketball court. The work was supposed to be done in April, but the pandemic pushed the finishing date to October.

Working with any old structure has its challenges, and this building was no different, Franco said. On the first floor, workers had installed flooring, and after it had been down a few days, Franco noticed that some of it was trying to curl up. Flooring experts did a humidity check and found that it was high. But where was the moisture coming from? It couldn't be coming from the old pool because that had been filled in for decades.

Franco said the architect, Fred Reed, went back and looked at the building's original, and he noticed an underground area that had apparently filled with water. The only way into it was through the sidewalk just outside the Fifth Avenue side of the building.

Franco said the water was 9 feet deep and covered an area that was 15 feet wide and 40 feet deep -- large enough that it extended under the building.

Getting rid of that problem cost $30,000 and set back the project a few weeks, but now that the water is gone and a humidity barrier has been installed, everything is fine, she said.

Despite the problems, Franco said she is thrilled to be using the decades-old building.

"It was a building that served the community when it was built," she said, "and now it's back to serving the community again. And in this way, we are preserving another downtown building. We are excited to open the doors and get started." 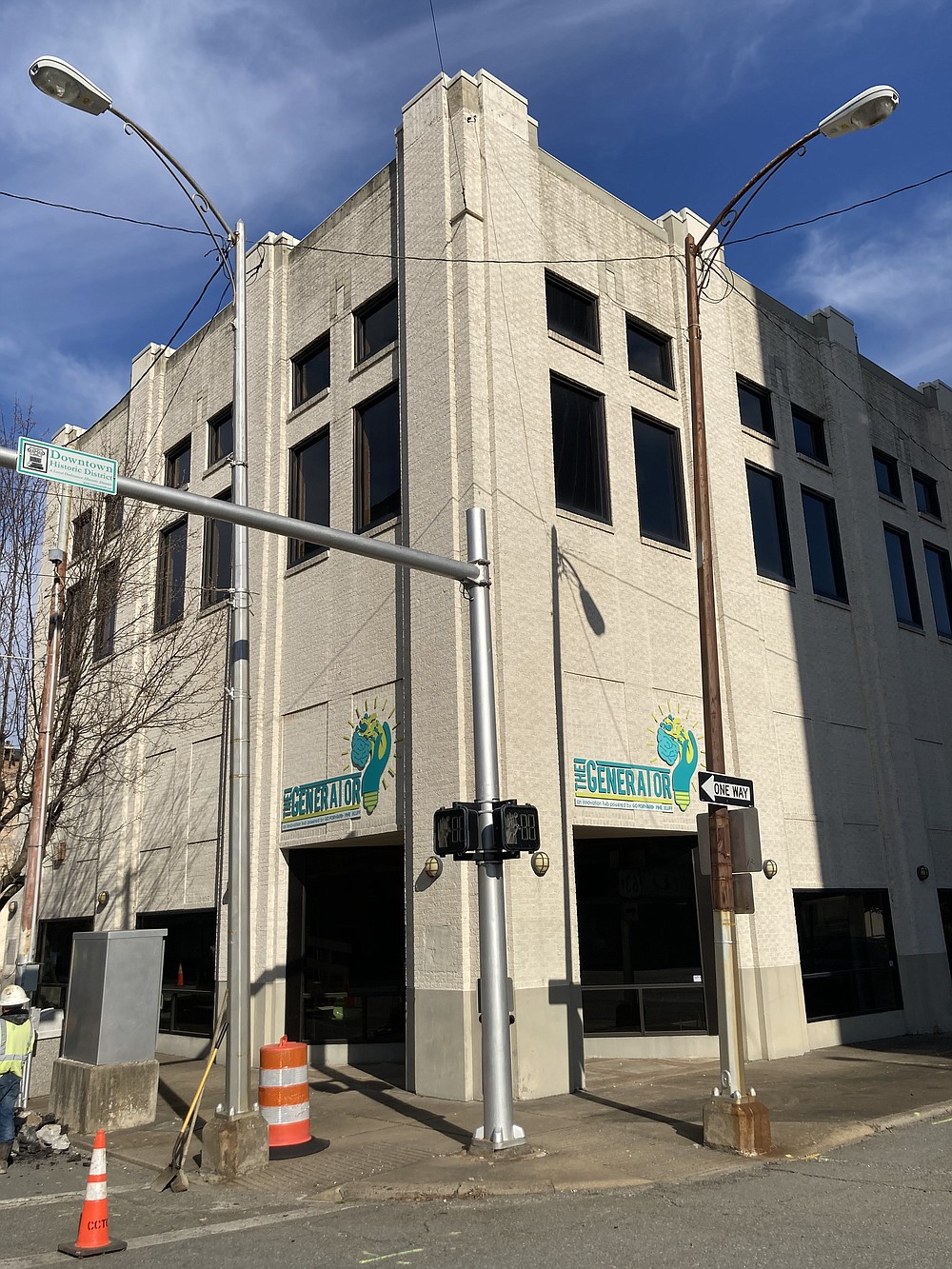 The Generator, located at the corner of Main Street and Fifth Avenue, was originally the Merrill Community Center. Mildred Franco, executive director, said that by locating The Generator there, another building in downtown Pine Bluff has been preserved. (Pine Bluff Commercial/Byron Tate)
ADVERTISEMENT