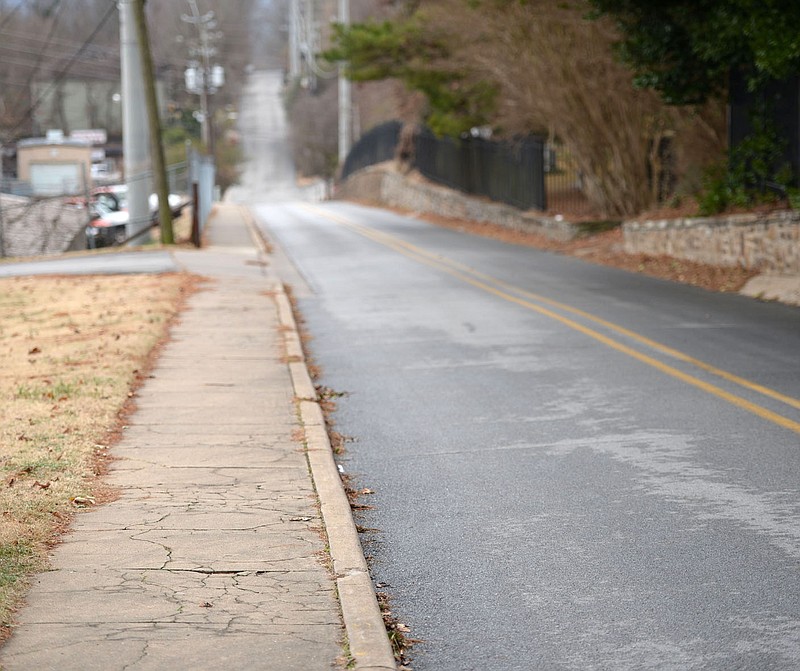 A sidewalk runs Tuesday, Dec. 29, 2020, along University Avenue east of the historic Evergreen Cemetery in Fayetteville. Repairing the sidewalk on the east side of University Avenue from Powerhouse Avenue to Whiteside Street is on the list of nearly 5,000 feet of sidewalk work the city plans to take on next year. Visit nwaonline.com/201230Daily/ for today's photo gallery. (NWA Democrat-Gazette/Andy Shupe)

FAYETTEVILLE -- The City Council's Transportation Committee forwarded a list of sidewalk and street maintenance projects on to the full council Tuesday, with plans to build bus shelters and address traffic calming in neighborhoods as well.

City crews are slated to take on about 4,620 feet of new, repaired or rebuilt sidewalk projects next year. That's in addition to 3,925 feet of sidewalks proposed for contracted work. This year's plan included more than 3,500 feet.

The city also plans to renovate about 21 miles of streets next year. There are also eight concrete pads planned to be built for bus shelters, with time set aside for crews to take on traffic calming projects in neighborhoods.

The Transportation Committee is made up of four council members. Tuesday's meeting was held online on Zoom.

Some sidewalk projects are holdovers not completed this year, said Keith Shreve, the city's assistant transportation manager. One major one is filling in gaps in the sidewalk on the south side of Mount Comfort Road from Addington to Garland avenues, he said. The road will get a 12-foot-wide continuous path for pedestrians and also functions the same way a trail does for bicycles.

The west side of Finger Road also will get a sidewalk from Walmart to Martin Luther King Jr. Boulevard.

The city also will continue improving sidewalks on and near Church Avenue as part of a larger downtown walkability project, Shreve said.

"It's a very complicated project, and we're running a little behind on that," he said.

The city started using a system two years ago to objectively score sidewalk projects and prioritize them accordingly. Two projects proposed for hired contracts ranked highly on the list, Shreve said. One is Prairie Street from Gregg Avenue to Archibald Yell Boulevard and the other is Leverett Avenue from Sycamore to Hazel streets, he said.

Both projects are large ones, and hiring contractors will free up time for the city's crews to take on other projects, Shreve said.

Matthew Petty, the committee's chairman, praised the system the city is using. Projects get on the list from a mix of resident and council member requests, as well as maintenance studies by city workers.

"I continue to be grateful at the approach we're taking on generating the list," Petty said.

Other large sidewalk projects include Cato Springs Road from Razorback Road to Vale Avenue and University Avenue from Whiteside Street to Powerhouse Avenue.

Next year's list amounts to about $470,000 worth of work. The city sets aside $500,000 annually out of its capital improvements budget for sidewalk projects. If crews have time and money available, they'll move on to projects slated for 2022, Shreve said.

City transportation crews also will dedicate five work days next year to installing traffic calming in neighborhoods, Transportation Services Director Terry Gulley said. Traffic calming could look like rubber speed-table type features or planters at the side of the road.

The city's plan to overlay 21 miles of streets next year and 19 miles in 2022 compares to the most done in a year, Gulley said. This year, 15 miles were completed, he said.

Information collected from a trailer with a sensor recording a street's quality is recorded into a database the city uses as an inventory of streets, Brown said. Using the information helps crews get started on projects, he said.

"It's a good combination of the human factor and the computer program," Brown said.

When they can, city workers consolidate street and sidewalk projects with water and sewer projects to do work on a particular stretch all at once, he said.

Fayetteville has plans to complete the following sidewalk projects next year:

• North side of Eleventh Street: Duncan to Hill avenues

• East side of Ray Avenue: Cul-de-sac to Pinyon Point

• Both sides of College Avenue: Lafayette to Dickson streets

• South side of Mountain Street: West to School avenues

• South side of Mount Comfort Road: Addington to Garland avenues

• South side of Sycamore Street: Saddlehorn Avenue to Porter Road

• East side of University Avenue: Whiteside Street to Powerhouse Avenue

• West side of Whitham Avenue: Taylor to Douglas streets

• North side of Birdie Drive: Par Court to Crossover Road

• North side of Warwick Drive: Pine Street to Nottingham Drive

• Both sides of Cleveland Street: Oliver Avenue to Sunset Drive

• Both sides of Heritage Avenue: Reliance Street to Wedington Drive

• West side of Verona Lane: Ika Lane to Miramar Drive

• West side of Leverett Avenue: Sycamore to Hazel streets

• Both sides of West Avenue: South to Prairie streets