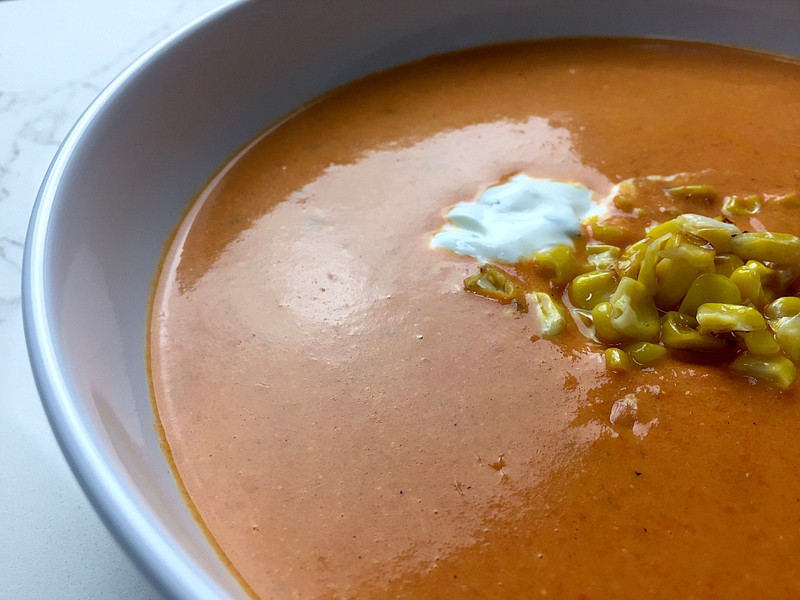 Together they create the perfect roasted red pepper soup — at least I think so.

The poblano adds just a whisper of heat while a splash of mezcal enhances this soup's sweet smokiness. If you prefer not to imbibe, the mezcal can be omitted. The soup will have a slightly different flavor, but still be quite good.

If you have some frozen Hatch or New Mexico roasted green chiles, feel free to swap them for the poblano. Jarred roasted red bell peppers can be substituted for the fresh, but I don't think they're quite as good.

Cut peppers in half, remove cores, seeds and membranes. Arrange peppers cut side down on prepared pan. Broil until pepper skins blacken and char. Bring corners of foil together to tent peppers; set aside for 10 minutes.

Meanwhile, in a soup pot melt 1 tablespoon of the butter over medium heat. Add garlic and corn and cook, stirring frequently, until corn is golden brown. Remove corn and garlic to a plate.

In the same pot, melt the remaining tablespoon of butter. Add the onion and saute until softened. Stir in the tomato paste.

Remove and discard pepper skins. Roughly chop peppers and add them to the pot along with the vegetable or chicken broth. Bring mixture to a boil, reduce heat and simmer 10 to 15 minutes. Season with salt.

Puree mixture in a blender or using an immersion blender until smooth. Return mixture to pot. If mixture is quite thin, add the dissolved cornstarch and heat, stirring, until thickened. Stir in the mezcal, half-and-half and heavy cream and cook just until heated through. Do not boil.

In a small bowl, stir together the sour cream, lime juice and cilantro.

Serve soup topped with a generous spoonful of corn and a dollop of sour cream.