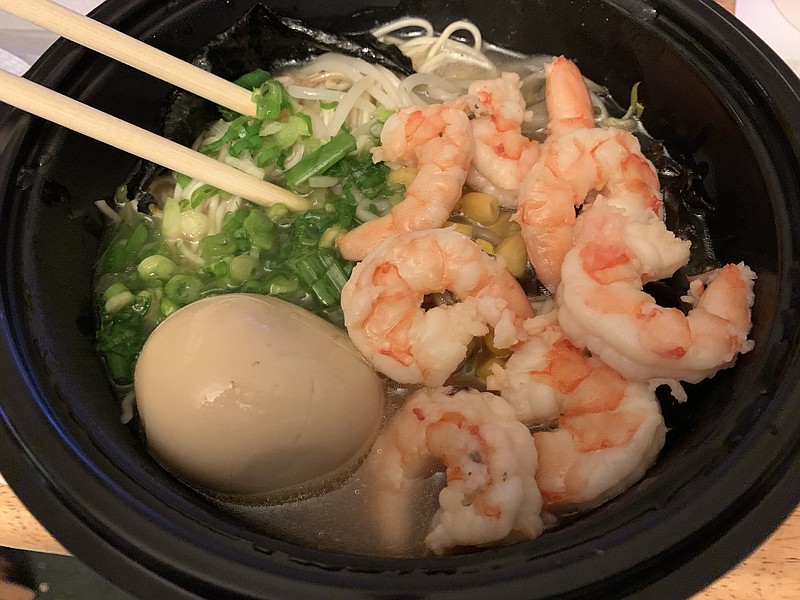 Shrimp Tonkatsu Ramen from Aji Ramen Bar was just as the menu described, except that the soft-boiled egg on top turned out to be a hard-boiled egg on the side. (Arkansas Democrat-Gazette/Eric E. Harrison)

We missed out on indulging in the Italian custom of the Feast of the Seven Fishes on Christmas Eve — blame the pandemic, right? — so as it happens, we've been catching up with some of our to-go dishes. (The chicken dish we're also covering this week just sort of sneaked into the picture.)

We're continuing our operating policy of supporting locally owned establishments (we figure chain places don't need quite so much help even in these tough times), paying for our meals up front and, for the moment, sticking to places within a reasonable radius to ensure that hot-to-go food stays hot, or at least hot-ish, by the time it gets to the home table.

And here's hoping the new year treats restaurants and diners better than the one that's passing tonight.

Ramen is a relatively recent and late-arriving entry into the Central Arkansas culinary scene, and our previous experiences with this Japanese broth-and-noodle-and-other-stuff dish have been heretofore comparatively cursory. A colleague reviewed Aji when it opened late in 2018, and for some reason we haven't been over there since, so this was our first experience, and boy, was it a good one.

We opened with the sliced marinated pork, which was very tender, very lean and very tasty, topped with a drizzle of rich sauce and garnished with scallions and sesame seeds. Since we were having pork for an appetizer, we opted for the shrimp version of the tonkatsu ramen (pork, chicken, vegetable/tofu and fried chicken are the other options), which the menu accurately describes as "creamy pork bone broth ... with seven pieces of shrimp, green onions, bean sprouts, sliced mushrooms, corn, roasted seaweed" plus a hard-boiled egg, which, having soaked some time in the broth, was a treat by itself.

We look forward to a return visit, perhaps to sample more of the other ramen options (miso, shoyu, curry, brothless and vegetable) or one of Aji's rice bowls.

HOW IT WENT: The very small dining room is open but part of it is blocked off for the taking and fulfilling of takeout orders. We placed ours and paid in person, then retreated to our car for curbside handover. Food came out in about 10 minutes, shorter than we were told it would take.

HOW IT'S GOING: Especially given the restaurant is operating at limited capacity, it looked pretty full and dine-in customers were coming in while we waited for our order. At least three vehicles parked out front were awaiting to-go orders.

This new branch of The Mighty Crab (there's also one in North Little Rock's Lakewood Village), in the midst of its grand opening, extends the number of places where you can get sloppy with seafood, offering boiled and bagged fish and shellfish in various combinations. We eschewed the plastic bibs and plastic gloves at home in the totally mistaken expectation that we wouldn't need them. We're long since still catching, around our dining area, a whiff of the garlic butter in which our seafood swam.

This seemed at the outset to be an enormous amount of food (and not very photogenic, which is why there is no photograph of what we ate), especially since these seafood combos come, or are at least supposed to come, with boiled potatoes and corn cob-ettes. But once we started chowing down, we weren't particularly overwhelmed. Maybe it was the exercise: the shrimp, though headless, were still in the shells, so we had to peel them as they went by; the mussels required some, though very little, pry-open effort — none of the shells was still closed, which has got to be a first; and the crab legs, of course, had to be torn apart, cracked and finagled until they yielded up their last shreds of succulent meat.

There are four sauce options — Cajun, lemon pepper, garlic butter and "Mighty Special (all of the above)" — and five spice levels: nonspicy, mild, medium, hot and "Extra." Even though we specified "nonspicy" for our garlic butter, it still delivered a pretty good kick. One minus: We got potatoes, but not corn, even though we specifically asked the counter person whether corn was supposed to come with the meal.

HOW IT WENT: There's a drive-thru, a holdover from when the building housed Catfish City (and yes, they kept the water wheel out front), but we decided not to puzzle that process out, instead ordering and paying indoors over the Plexiglas-protected counter. Our order took about 10 minutes to come out of the kitchen.

HOW IT'S GOING: There appeared to be a sizable number of dine-in customers, and there were several to-go orders, a couple for folks waiting and others to be handed through the drive-thru window. 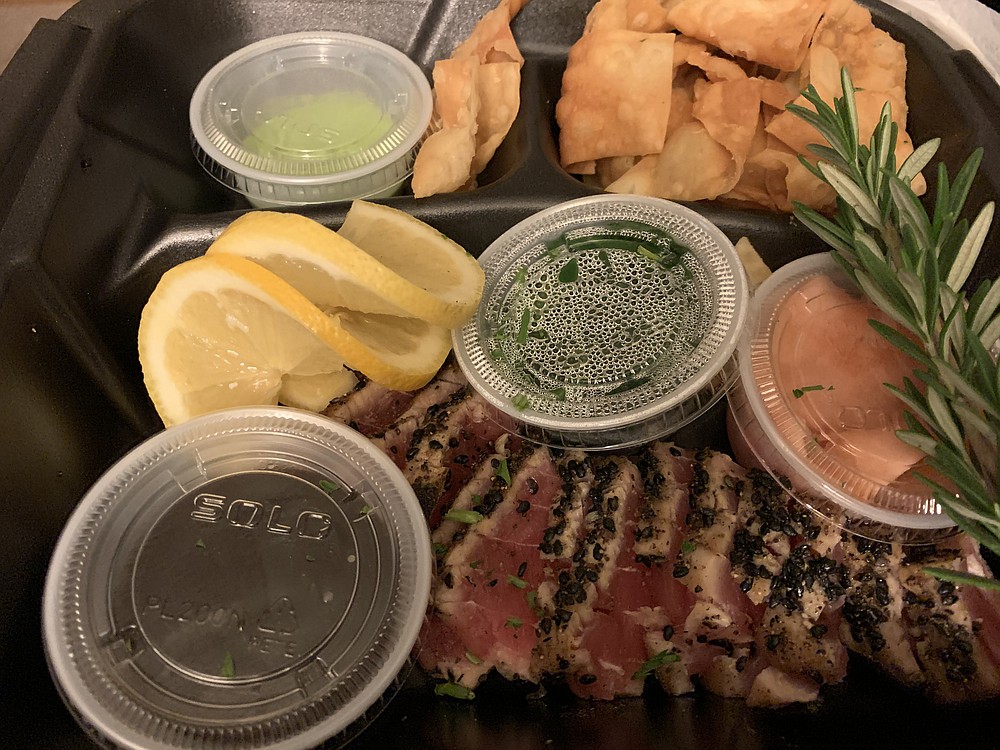 This flying visit confirmed our long-standing evaluation of Capers as a restaurant where the appetizers are exceptional and the entrees are, at best, ordinary. Cases in point: the really excellent tuna appetizer/small plate, a goodly portion of perfectly sliced, lightly seared ahi tuna, served with fried wonton noodle bits, with cups of hoisin sauce and a pungent wasabi-horseradish composite for dipping, plus cups of pickled ginger and spinach. By comparison, the large portion of lightly herbed and battered grouper filet was bland, even once we added some of the side-supplied Dijon caper sauce, which bore a too unfortunate resemblance to tartar sauce. It did come with two reasonably entertaining side items — fresh spinach that was livelier than the fish, and some allegedly lemon-zested basmati rice. We allowed the person who took our order to upsell us on dessert, and our sizable chilled creme brulee, with a properly caramelized top crust, was delicious.

HOW IT WENT: We placed our order over the phone, and paid for it on arrival while we waited — about eight minutes longer than promised — in a parking place dedicated to curbside delivery.

HOW IT'S GOING: There were two other vehicles awaiting curbside orders, and we saw several folks entering the premises with the intention to dine in. 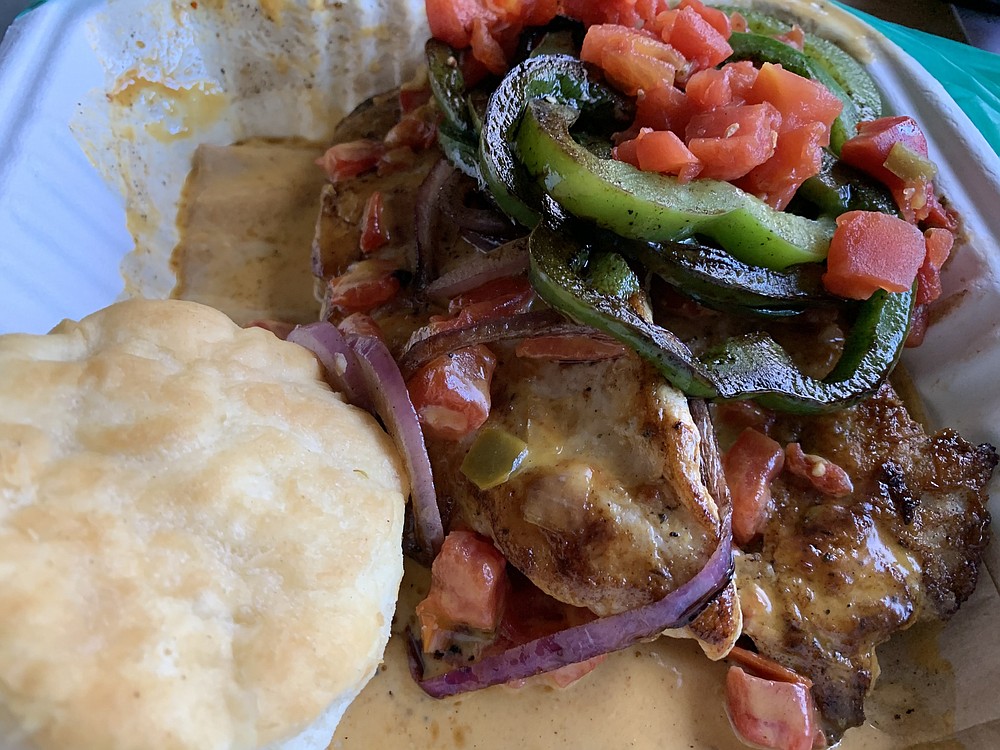 Stickyz, which is, or was, pre-pandemic, possibly more popular as a live music venue (by the owners' intent) than as a restaurant or even as a River Market watering hole, started out offering mostly fried pub grub, but the menu has expanded since and we were pleased to find this particular chicken dish on the "Headliners" portion of the menu. We got a huge grilled chicken breast, surprisingly moist (it's really hard to grill a piece of chicken this size without it getting dry, so we're thinking it was marinated first), almost overwhelmed by the amount of sauteed onions, sliced green bell peppers and tomato chunks. A thin and rather vague queso sauce provided a light coating and mostly pooled in the bottom of the to-go container. It came with a buttermilk biscuit and choice of side; we opted for the sauteed mushrooms, $2.99 a la carte, and were glad we did, since they came sauteed in a considerable amount of wine and garlic.

HOW IT WENT: The dining room is open, so we ordered and paid at the bar. It took about 15 minutes for us to get our food, which is not outrageous considering the kitchen was grilling a chicken breast. And somebody back there had decorated our compostable clamshell container with a marker, depicting a Christmas tree, a package, a heart and the messages "Enjoy" and "Love Live Music."

HOW IT'S GOING: There was a sprinkling of occupied tables at lunch and a few folks at the bar, but it wasn't enough to over-occupy the staff. 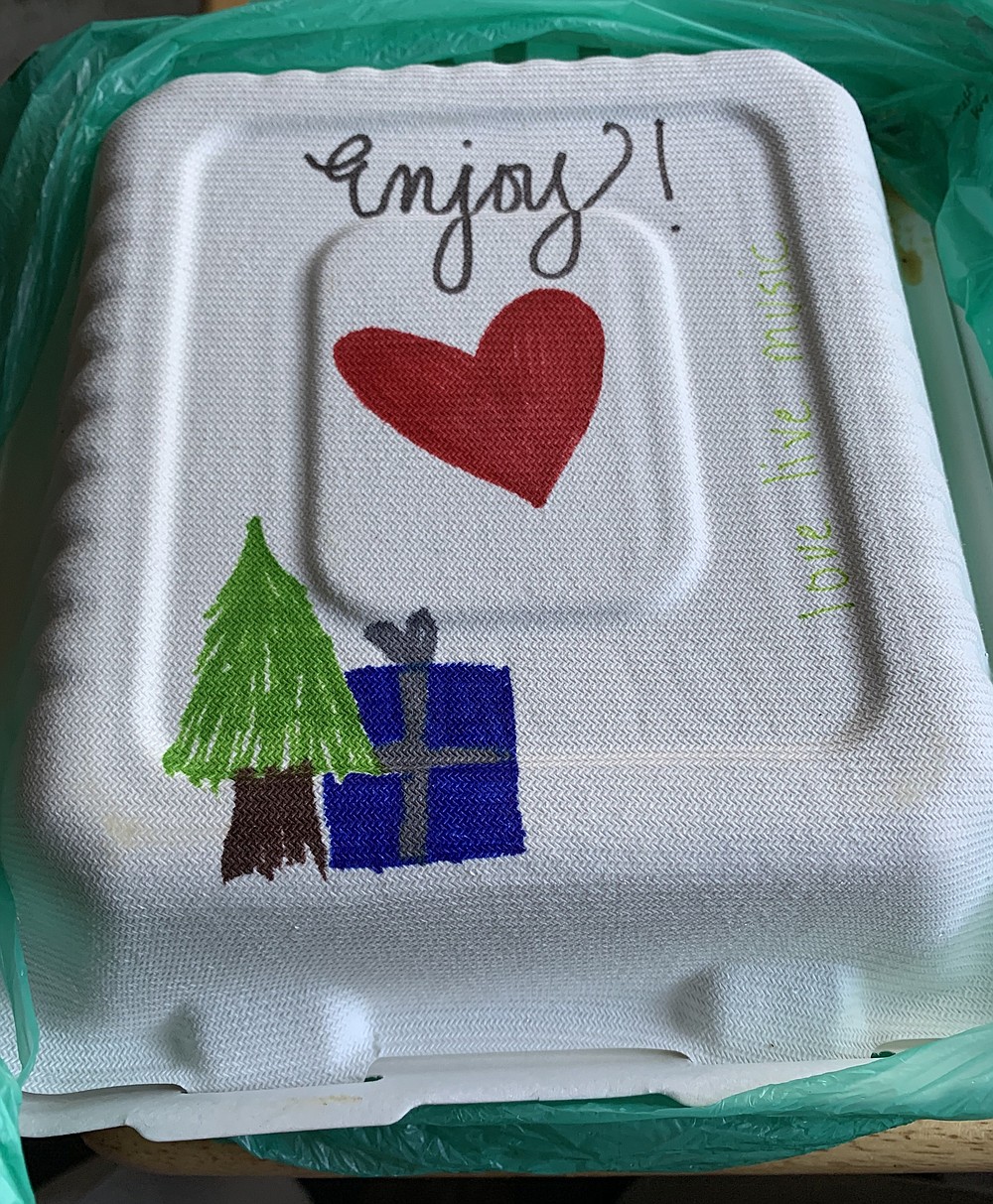