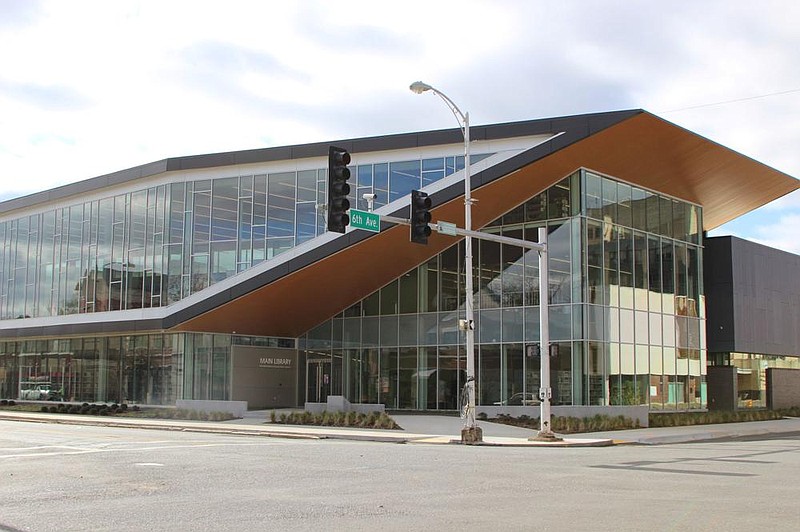 For many, 2020 can't fade into the rearview mirror fast enough. While Jefferson County residents suffered from the covid-19 pandemic first and mourned more than their share of deaths, not all the recent news was catastrophic.

Despite the predictions of problems connected to the state's new voting machines, Jefferson County residents managed to vote in the general election without more than a hiccup or two, and the University of Arkansas at Pine Bluff (UAPB) virtually wished their 550 graduates well before sending them into the world to make their mark.

And vaccinations -- a possible game changer in the covid-19 battle -- of the area's medical staff are well underway.

While much of the world stopped with the pandemic, Pine Bluff and Jefferson County officials have been busy working the phones, talking with potential companies and employers interested in relocating to the area.

While for now interested commercial enterprises will remain unnamed, there are promises of more "good stuff" to come, officials said.

"We've had more inquiries and possible potential projects this year than in 2019," said Allison Thompson, president and chief executive officer of the Economic Development Alliance for Jefferson County.

"Five industrial properties sold this year in Jefferson County," she continued. "Three of which were existing buildings and one of which had been on the market for 20 years."

CARTI announced its intentions to build a fifth comprehensive CARTI Cancer Center in Pine Bluff. Services will include medical and radiation oncology, an infusion suite, imaging, mammography and an on-site lab. Construction was set to begin in December and the project is anticipated to be completed by January 2022.

"People are already noticing our (Jefferson County) growth and saying, 'Wow!'" she said.

One of the largest and most impactful economic developments in Jefferson County included the opening of the Saracen Casino Resort. Sitting east of Pine Bluff proper, the casino, its annex and hotel will employ possibly 1,300 when completely up and running.

The casino bills itself as an infusion of Native and African-American cultural experience that offers visitors a chance to play 2,300 slot machines and 30 table games.

There will be six restaurants, 300 hotel rooms and an outdoor event venue, 15,000-square-foot event facility for live music, special events and banquets.

"It's huge for this area," Thompson said.

ReadyOne Industries started production in August and plans to hire about 120 when at full production.

It produces military clothing, with a large portion of its workforce consisting of disabled employees, said Luis Alvarez, ReadyOne Industries CEO and president.

An approximately 25,000-square-foot facility was refitted to the company's needs, and there are plans for a second shift in the next few months.

The retrofit of a building is already underway for the state licensed cannabis growing facility at 3300 N. Hutchinson St.

Pine Bluff Mayor Shirley Washington said the company is making a $25 million initial investment, which will result in about 200 new jobs.

The jobs will average $19 an hour, with an annual payroll and benefits of approximately $9.4 million.

"We'll have 100,000 square feet under roof, but our grow area is 42,000 square feet," Alex Gray, a Little Rock attorney and investor, said about the facility.

The facility is located inside the Jefferson County Industrial Park, sandwiched between Pine Bluff and White Hall.

According to Eric Thornton, Good Day Farm co-owner, they plan to start hiring employees in January and may possibly be fully operational by early summer.

More than a medical boost, this is an economic boost to the area, Washington said.

Statewide sales were expected to be about $200 million by year end.

Good Day Farm plans to keep on growing across the South and has operations planned for Mississippi and Louisiana and has applied for a license in Georgia, Thornton said.

Also, the company plans to partner with Southeast Arkansas College and the University of Arkansas at Pine Bluff on development, classroom training and research.

With the widening of Sheridan Road on both sides of Interstate 530, came a number of new businesses and announcements this year.

Relyance Bank has outgrown its home on Poplar Street in Pine Bluff and is moving to White Hall.

There, just west of Interstate 530 on Highway 270 and across from Smart Motors, the financial institution is preparing to build a three-story, approximately $15 million headquarters.

"Our board has been talking about looking for a new site for about 10 years, but we spent most of our resources on growth, particularly in the Little Rock area," said Chuck Morgan, Relyance Bank chairman and CEO.

It will be large enough to house about 100 employees with room for future growth.

Already, the architects at Polk Stanley Wilcox Architects of Little Rock have put the finishing touches on the initial concept design of the 40,000-square-foot building, and Clark Contractors LLC of Little Rock will oversee the project.

Construction is expected to start after the New Year.

Believing that, Patel is building a $10 million-plus TownePlace Suites by Marriott on Sheridan Road, just west of the Smart Motors complex and just off Interstate 530.

The planned TownePlace will be four stories tall with 80 rooms with kitchens, and "designed for longer stays," Patel said.

While some of the site work is underway and the designs are completed, Patel said, construction will not start until January but should be completed within 14 months.

One employee described it as the most modern, most unique building in the city, and he may be right.

Finally, after months of being closed due to the covid-19 pandemic, the two-story modern building opened to little fanfare.

Library staff hope to host a grand opening in the future when large gatherings are again allowed.

She's optimistic about the area's potential.

They spent about $1.2 million for renovations and expansions at Redfield, Altheimer and White Hall, with the remaining money, about $13 million spent on the ground-up construction at the main branch and work at Watson Chapel.

The main branch and all branches are now open to the public.

Across Main Street from the new library, there's the recently built plaza, and the UAPB Business Support Incubator and Office Complex is hatching new ideas.

Next door, renovations on the ArtSpace on Main and on the ARTWorks, both belonging to the Arts and Science Center for Southeast Arkansas's (ASC) campus, are nearly completed.

The ASC's ARTSpace on Main is a flex space that can serve a multitude of purposes, from galas with fancy finger foods to street festivals and backyard barbecues to space for kilns and classrooms, yet it has the ability to expand and shrink by the use of large glass garage-style doors with ease and as needed.

It's part of ASC's growing campus on Main Street in Pine Bluff.

The construction and renovations on the 11,000-square-foot space is nearly complete and is expected to open for public use early in the new year.

The ARTSpace on Main is a mashup of modern and late last century elements, thus giving a nod to the original structure, built in 1920, that served as a firehouse, said Rachel Miller, ASC director.

The new retrofitted space is a "good example of sustainable adaptation that retains the distinct and defining features" of the downtown area, she said.

It was paid for by a $2.5 million Windgate Foundation grant.

ASC's next project is The ARTworks on Main Street, in between The ARTSpace and their main building.

It's scheduled to be completed in a few months.

The jewel of ARTworks will be a 70-seat black box theater for small, community-oriented productions, and will be named in honor of longtime ASC supporter and ASC Board Member, the late Adam B. Robinson Jr.

ARTworks will also include five apartments for resident artists with accompanying studios that can be used by the residents or rented to local artists.

MOVING THE CITY IN THE RIGHT DIRECTION

"It's much more than a library, it's a downtown game changer. It's remarkable in terms of progress," Watley said, adding that not long ago, the city was dealing with crumbling buildings on Main Street.

Although phase one of the Main Street remake from Barraque to Fourth avenues, is nearly complete, phase two, from Fourth to Eighth avenues, has yet to begin.

But it's enough of a change that it makes Go Forward's mission of enticing new businesses to the downtown much easier, Watley said.

But Storie hopes the transformation doesn't stop at the Sixth Avenue block, as she envisions a "Cultural Corridor" that could incorporate the Pine Bluff/Jefferson County Historical Museum, which is within walking distance from the library, ASC and possibly other destinations in the future.

The city is currently undertaking a number of streetscape projects across Pine Bluff, including Main Street and another on University Drive.

"At the same time, we are in the engineering phase on a project to reconstruct Plum Street between Vaugine and Bell streets, as well as a project to build a multi-use trail on Grant Street, which would connect Sixth and 13th streets," said Mayor Washington.

The latter is part of the city's ongoing "Safe-Walk-to School" initiatives.

Washington said, the city is excited about these opportunities, especially the improved downtown infrastructure and the growing downtown amenities like the new library.

"Our community will greatly benefit from these developments. They are examples of the wonderful progress that is moving our city forward," she said. 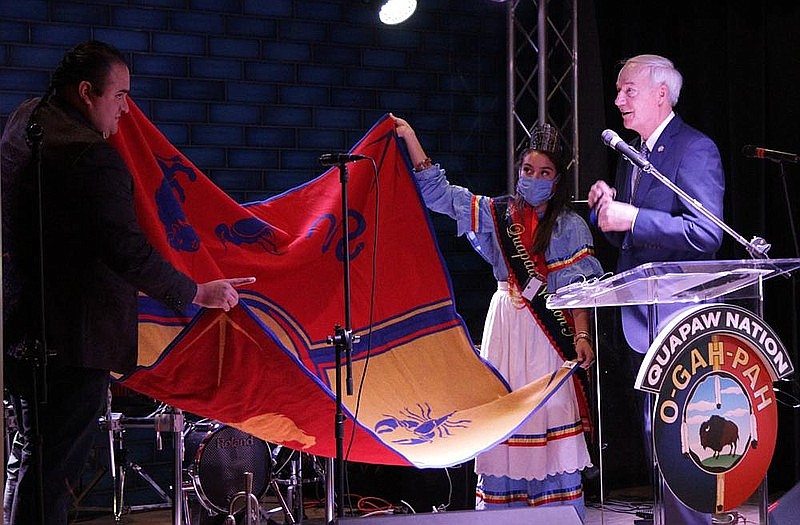 In October, Quapaw Chairman Joseph Tali Byrd (left) and Tribal Princess Kristal Glass presented Gov. Asa Hutchinson with a tribal blanket, which Byrd said is one of the highest honors the Quapaw Nation can bestow. The presentation was made at a sneak preview of the Saracen Casino Resort as it prepared for a grand opening. (Pine Bluff Commercial/Dale Ellis)
ADVERTISEMENT