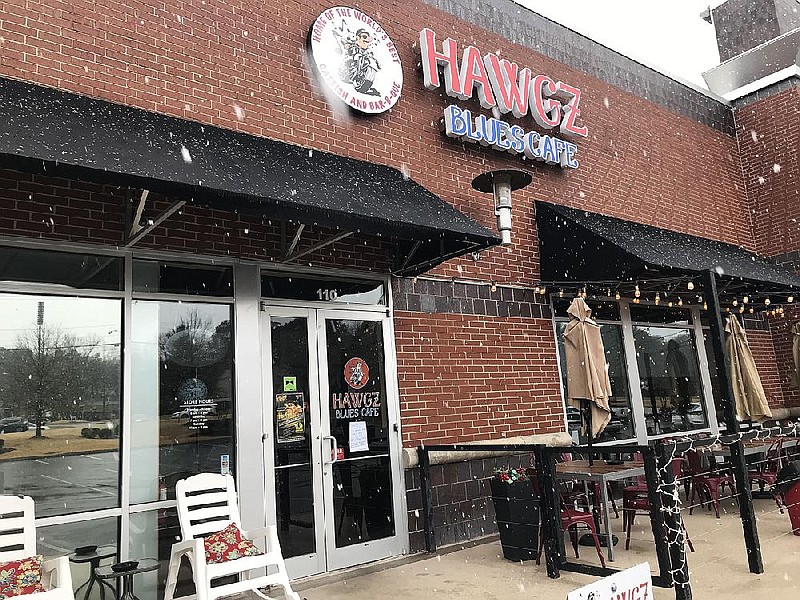 Hawgz Blues Cafe in west Little Rock is shown in this Jan. 23, 2019 file photo. A call to the restaurant's North Little Rock location returned a recording that the number has changed, but the new number is "unknown."

One of our eagle-eyed readers reports seeing the sign and the interior of Hunan Palace Express, 2906 MacArthur Blvd., North Little Rock, "totally dark when I pass by around 6:15 each evening." Calls last week to the listed phone number — (501) 812-5925 — during business hours (11 a.m.-9:30 p.m. Monday-Thursday, 11 a.m.-10 p.m. Friday-Saturday) reached a voice-mailbox that, according to the recording, was full and not taking more messages. We'll check again after the top of the year.

We're also getting reader reports questioning the status for Hawgz Blues Cafe, 5524 John F. Kennedy Blvd., North Little Rock. A call to the listed phone number, (501) 478-6300, returned a recording that the number has changed, but the new number is "unknown." We also checked the URL, hawgzbluescafe.com, and discovered it "Isn't Connected to a Website Yet!" We're working to confirm just what is, or isn't, going on there as well.

An outlet of Marco's Pizza opened Wednesday at 3701 E. Johnson Ave., Jonesboro. Owner-operator is Vishal Patel, who, according to a news release, "owns multiple businesses in the hospitality and restaurant space" and who has plans to open two more Marco's Pizza stores "throughout the next couple years." We don't yet have operating hours; the phone number, according to the release, is (870) 393-3565, but it was not yet in service when last we checked. The chain's website is marcos.com.

And a coalition of 2,100 restaurants, bars, and wine shops around the country, including The Meteor Cafe in Bentonville, signed onto a letter from the Coalition to Stop Restaurant Tariffs calling on President-elect Joe Biden to eliminate current 25% tariffs on European food, wine and spirits. The letter notes that the tariffs, which the coalition says inflict four times more economic damage on U.S. business than on their European counterparts, have been a particular strain on the hospitality industry during the pandemic crisis. Read the full letter online at tinyurl.com/ycwf6pl9.