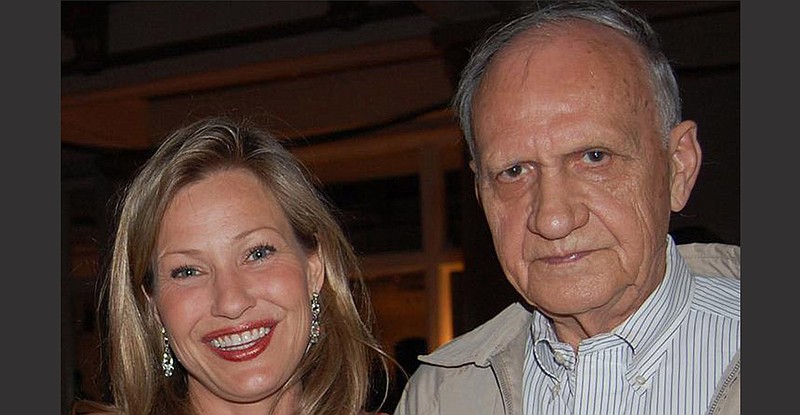 Many Arkansas notables died in 2020, including the man who penned "True Grit," the coach who put Razorback basketball on the map, the father of the modern bass boat and the longtime cook to governors.

Charles Portis and Eddie Sutton were among giants who died this year.

Portis, 86, died Feb. 17 in Little Rock. He was best known for his 1968 novel, "True Grit," which was a New York Times bestseller and was made into two motion pictures, one starring John Wayne -- who won an Academy Award for his portrayal of Rooster Cogburn -- and the other, which was directed by Joel and Ethan Coen, starring Jeff Bridges.

The New York Times in its Portis obituary referred to him "as possibly the nation's best unknown writer" whose work featured "misfits, cranks and sly humor."

In all, Portis published five novels -- the first being "Norwood" in 1966 -- and numerous magazine articles, short stories and one stage play. His writings were published in such magazines as The Saturday Evening Post, The New Yorker, The Atlantic Monthly and The Oxford American. Much of this work was collected in "Escape Velocity: A Charles Portis Miscellany," edited by Jay Jennings and published by the Central Arkansas Library System.

Born in El Dorado, Portis attended high school in Hamburg before becoming an auto mechanic and then a U.S. Marine. He worked for newspapers in Fayetteville, Little Rock and Memphis and then covered the civil rights movement in the South for The New York Herald Tribune before a stint as that newspaper's London bureau chief. He quit that in 1964 to become a novelist.

Eddie Sutton didn't grow up in Arkansas nor did he live in Arkansas at the time of his death at age 84 on May 23. Sutton made an enduring mark on the Natural State as the men's basketball coach for 11 seasons at the University of Arkansas, Fayetteville, pushing the university's basketball program into national prominence.

Sutton took the Razorbacks -- including "Triplets" Ron Brewer, Marvin Delph and Sidney Moncrief -- to the NCAA Final Four in 1978.

That was followed with trips to the Elite Eight in 1979 and to the Sweet 16 games in 1981 and 1983. Sutton led his teams to more than 800 wins in his career at the University of Arkansas, Creighton, Kentucky, Oklahoma State and San Francisco.

Following are just some of the other lifelong or short-term Arkansans who died in 2020, listed in chronological order by date of death. Information about each was pulled from newspaper and/or funeral home obituaries and articles written about them.

Ralph Harry Nesson, 72, of Fayetteville died Jan. 6. In 1984. Nesson founded the Washington County Single Parent Scholarship Fund and built it into the Arkansas Single Parent Scholarship Fund by 1990. The organization offers $1.5 million in higher education scholarships annually. Nesson was key in establishing Northwest Arkansas' first Jewish house of worship, Temple Shalom in Fayetteville, by brokering a meeting between the congregation and contractor Fadil Bayyari, a Muslim and fellow Rotary Club member, who built the house of worship for the congregation at cost.

David Glass, 84, died Jan. 9. Named president and chief executive officer of Walmart in 1988, Glass is credited with establishing Walmart's first distribution center in Bentonville, Sam's Clubs and super-centers, and he oversaw the company's first forays into the international marketplace with expansion into Mexico. He and his family owned the Kansas City Royals baseball team from 2000-19.

Phyllis Dillaha Brandon, 84, died Jan. 11. Editor of the Arkansas Democrat and then Arkansas Democrat-Gazette High Profile section beginning with its first publication Jan. 5, 1986, and into 2009, Brandon reported on the lives, the parties and the philanthropies of the state's elite.

Forrest L. Wood, 87, of Flippin, died Jan. 25. Known as the father of the modern bass boat, Wood and his wife, Nina, in 1968 founded Ranger Boats and more recently were involved with Vexus Boats. A competitive angler, Wood qualified for the world championship Bassmaster Classic in 1972 and 1979. He was the namesake behind the FLW Tour tournament trail and has been inducted into numerous halls of fame, including the Arkansas Business Hall of Fame in 2006 and the Arkansas Sports Hall of Fame in 2011. He also served multiple years as a member of the Arkansas Game and Fish Commission. The Forrest W. Wood Crowley's Ridge Nature Center in Jonesboro is named for him.

J. Wayne Cranford, 87, died Feb. 15, in Little Rock. Co-founder in 1961 of Cranford/Johnson Inc., which would become the state's largest advertising, marketing and public relations agency, Cranford helped create campaigns and brands for prominent companies and state agencies. Cranford also worked on the political campaigns for J. William Fulbright, Bill Clinton and Jim Guy Tucker. He was chairman of the Arkansas Governor's Mansion Commission across the terms of four governors. Clinton appointed him to the President's Advisory Council on the Arts, for which he served as chairman from 1994-2001.

Thomas B. Schueck, 78, died March 3. Chairman of the Arkansas Highway Commission at the time of his death, Schueck began the 2,000-employee Lexicon Inc.-- a large-scale steel erection and construction management company -- more than 50 years ago in his carport. Company projects included AT&T Stadium in Arlington, Texas, steel mills for Nucor and Big River Steel, Amazon warehouses and other heavy industrial, commercial and roadway projects around the world.

Eddie Joe Stewart, 72, died March 21. A Little Rock church pastor and bishop, Stewart was a founding member of the Little Mike and the Gospel Stars Quartet, and performed nationally with artists such as Dottie Peoples, the Pilgrim Jubilee Singers, The Gospel Keynotes, The Five Blind Boys of Alabama, and the Mighty Clouds of Joy.

Robert H. Biggadike, 85, of West Covina, Calif., died March 26. Raised in Newport and holder of bachelor's and master's degrees in mechanical engineering from the University of Arkansas, Biggadike's career in aeronautics included work in the Apollo spaceship program. Biggadike was one the University of Arkansas' "Towers of Old Main," an honor awarded to the university's most generous benefactors.

Sister Macrina Wiederkehr, 80, died April 24, in Fort Smith. A native of Altus, Wiederkehr was a Benedictine sister of St. Scholastica and nationally known for her creative writing and retreat ministry. She was a regular contributor to Living Faith, which consists of collections of daily Catholic devotions, and the author of nine books on prayer and spirituality.

Harold Sells, 92, of Las Vegas died July 29. The Ozark native grew up in a two-room shack on a 40-acre farm. At 17, he worked at a G.R. Kinney shoe store in Fort Smith. By 19, he was store manager. He worked his way up to chairman and chief executive officer of the parent company, F.W. Woolworth Co., but not before he recommended the company focus on athletic footwear. The result? The Foot Locker chain, which eventually evolved from Woolworth.

John Tucker "Tuck" Morse, 75, of Charleston, S.C., died July 30. The Little Rock native, son of a former mayor of the city and trained as a lawyer, Morse took a chance and joined Fred Smith as one of the first 10 employees of what would become Federal Express in Little Rock. The company and Morse later moved to Memphis. Morse left FedEx in 1981 when it had 40,000 employees. Morse later returned to Little Rock and became an investor before settling in Charleston to be closer to family.

Bette Greene, 86, died Oct. 2 in Lakewood Ranch, Fla. In her young-adult classic novel "Summer of My German Soldier," Greene used her hometown of Parkin -- where her parents ran Evensky's Dry Goods -- as the setting. The award-winning book that was adapted for a television movie tells the story of a lonely Jewish girl who illegally aids a German prisoner after he escapes from a stateside prisoner of war camp. Greene said much later that the story was autobiographical.

Frederick Hampton "Hamp" Roy Sr., 83, died Oct. 8. A Little Rock ophthalmologist, Roy was a city director from 1991-95 and a candidate for lieutenant governor in 1986 and 1990. The author of more than 40 books on ophthalmology, history, architecture and religion, Roy was an advocate for historic preservation and a philanthropist, according to the Encyclopedia of Arkansas. He established the World Eye Foundation in 1974 to improve the quality of eye care in developing nations. He traveled internationally to teach surgical techniques and medical treatments. He was the first ophthalmologist in Arkansas to use the intraocular lens implant, a treatment of choice for cataract surgery.

Eliza "Liza" Jane Burnett Dodson Ashley, 103, died Nov. 13 in Los Angeles. Ashley cooked for seven Arkansas governors, from Francis Cherry to Bill Clinton. She later compiled a cookbook, "Thirty Years at the Mansion." She learned to cook from her grandmother while growing up in Pettus in Lonoke County. Chicken pie, stuffed pork chops, cheese enchiladas, pound cake and chocolate chip cookies were among her mainstays.

Jack Kinnaman, 86, of Little Rock died Nov. 19. After working on power plant and municipal projects around the country, Kinnaman arrived in Little Rock as project manger in 1971 for the new Baptist Medical Center. He founded Kinco Constructors and went on to be involved in high-profile projects, such as the Donald W. Reynolds Razorback Stadium in Fayetteville and the Bill and Hillary Clinton National Airport/Adams Field in Little Rock.

C. Dennis Schick, 83, died Dec. 7. Schick was executive director of the Arkansas Press Association, a state trade association of newspapers, for 25 years from 1979 to 2004.

Fred Akers, 82, died Dec. 7 in Horseshoe Bay, Texas. The Blytheville native played football at the University of Arkansas and later coached the Razorbacks' dreaded rival, Texas, for 10 seasons. In 1959, Akers kicked a field goal to beat TCU, 3-0, to give Arkansas' then second-year coach Frank Broyles his first significant win over a highly-regarded opponent. Akers went into coaching after graduating in 1960, getting the top job at Texas in 1976. He won 86 games in 10 seasons and twice came within one game of winning national championships for the Longhorns.

Charlotte Tillar Schexnayder, 96, died Dec. 11. As editor/publisher for 44 years with her husband, Melvin, of The Dumas Clarion, Schexnayder editorialized against World War II Japanese-American internment camps in this state and supported the desegregation of Little Rock Central High School. As a member of the Arkansas House of Representatives from 1985-99, she enhanced the state's Freedom of Information Act and led a bill creating the Arkansas Ethics Commission and one creating a sales tax for a research center and endowed chair at the University of Arkansas for Medical Sciences in alcohol abuse prevention. "Charlotte was an legendary journalist, a devoted public servant, and a wonderful friend," former President Bill Clinton said.

Peggy Nabors, 74, died Dec. 25. As the Arkansas Education Association's elected president in the mid-1980s, Nabors led vehement opposition to Act 76 of 1983 that required the state's practicing elementary and secondary school teachers to take a basic skills test to retain their teaching licenses. Nabors and then-Gov. Bill Clinton, who supported the measure, debated the matter on "The Phil Donahue Show."

Loyd Phillips, 75, died Dec. 27. He was a two-time All-America defensive lineman for the Arkansas Razorbacks who played on the 1964 National Championship team. He was later selected in the first round of the NFL draft and played for the Chicago Bears and New Orleans Saints before a leg injury ended his career after three years. He returned to Arkansas to complete his degree and then worked as a teacher and school administrator in the Rogers and Springdale school districts.

More than 30,000 people die in Arkansas every year. The list of Arkansans featured here is subjective and omits many who made life better or interesting for their families, communities, state and nation.

Print Headline: Taken in 2020, not forgotten