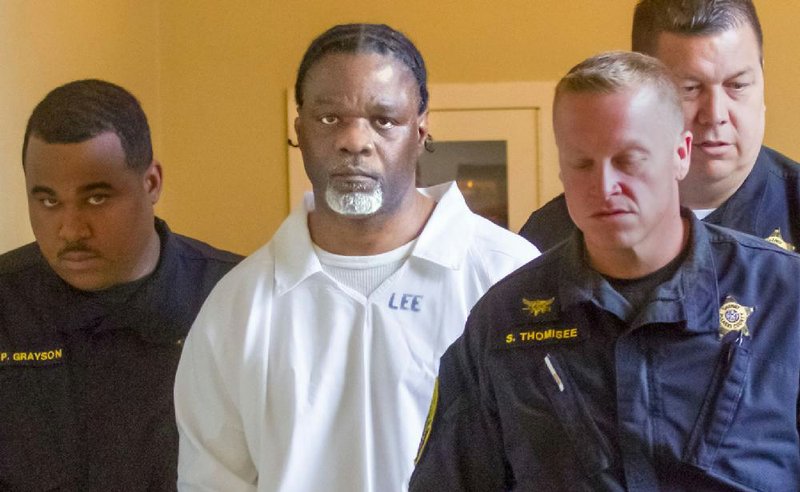 In this April 18, 2017, file photo, Ledell Lee appears in Pulaski County Circuit Court for a hearing in which lawyers argued to stop his execution. (Benjamin Krain/The Arkansas Democrat-Gazette file photo via AP)

Jacksonville refused to release the DNA evidence collected during a homicide investigation that led to the execution of convicted killer Ledell Lee, but City Council members made a concession Friday.

They agreed to have a laboratory test the DNA and release the results.

Council members agreed that once a testing facility is found, a lawsuit seeking to obtain the evidence will be dropped.

During a special meeting Friday night, the City Council voted 6-0 in favor of City Attorney Stephanie Friedman's recommendation to settle the lawsuit.

[Video not showing up above? Click here to watch » https://www.youtube.com/watch?v=gCbDfrTlEXc]

"I didn't know which way they would vote," Friedman said after the meeting. "Legally, I feel I had a duty to bring this forward and let the council decide on how to proceed."

A lawsuit was filed by the sister of Lee, who was put to death for the 1993 slaying of Debra Reese. Reese was beaten to death inside her Jacksonville home during a robbery, trial testimony said.

Lee was executed in April 2017, becoming the first Arkansas prisoner to be put to death in more than a decade.

Lee's sister, Patricia Young, had filed a lawsuit in Pulaski County Circuit Court seeking to have Jacksonville's Police Department turn over evidence for DNA testing. Attorneys from the Innocence Project and the American Civil Liberties Union were among those representing Young in the case.

The plaintiff's suit to obtain the DNA was amended. It made an offer to the city to have the evidence tested at a lab.

Friedman told council members Friday that a laboratory hasn't been agreed upon but said that would be the next step.

"This lawsuit was always about finding the truth, and we're glad the Jacksonville City Council has decided to do the right thing and allow this evidence to be tested," said Holly Dickson, interim executive director of the ACLU of Arkansas.

Some of Lee's family members attended Friday's council meeting, which lasted about five minutes. They left without speaking to the media.

Johnson, the mayor, said he was cautiously optimistic the council would vote to have the DNA tested at a lab.

"I look at it this way. If a gentleman was put to death and shouldn't have been, that means there's a murderer loose somewhere in Jacksonville or Arkansas or [the U.S.] and they need to be brought to justice," he said.

Lee's first trial in Reese's slaying ended with a hung jury, but he was convicted and sentenced to death at his second trial. Plaintiffs have contended that Lee's attorneys were ineffective, including his appellate attorney, who failed to seek DNA testing of the evidence.

During the trial, prosecutors relied on eyewitness testimony from several of Reese's neighbors, who said they saw Lee roaming the neighborhood the morning of the slaying. Lee was never linked to the crime through DNA analysis.

There are those who are emphatic about Lee's guilt and others equally convinced that he wasn't the killer. Lee pleaded his innocence throughout the appellate process.

Dickson, in her statement, said that while nothing can "undo the injustice of Ledell Lee's execution," Friday's vote was a "long-overdue step" to finding out who the real killer was.

Additionally, Lee was serving a prison sentence for two rapes. Court documents also indicated that Lee's arrest allowed investigators to link his DNA to another unsolved rape and another homicide.

Those charges were dropped after Lee received his death sentence for Reese's murder.