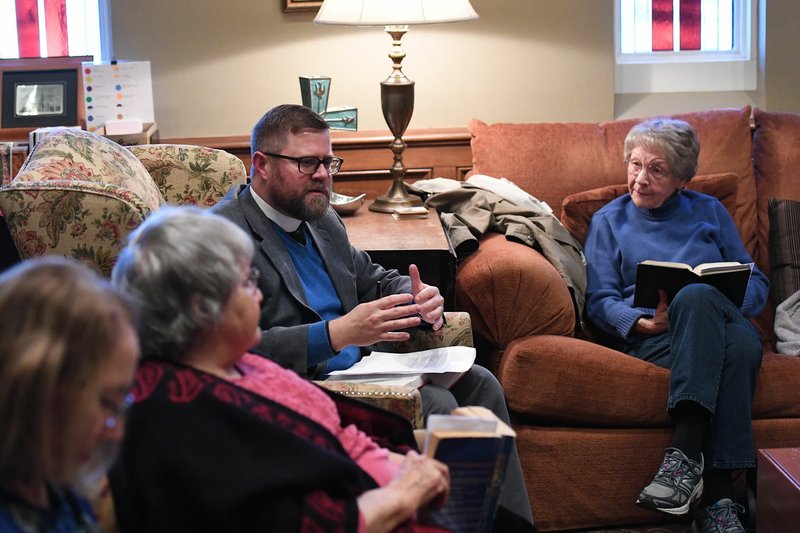 The Rev. Evan D. Garner, rector of St. Paul's Episcopal Church in Fayetteville, leads a Bible study group earlier this week. Garner was nominated as a candidate for the position of bishop of Alabama, but he says he's delighted he wasn't the one God called to fill the post. (NWA Democrat-Gazette/J.T. Wampler)

The Rev. Glenda Curry, rector of All Saints' Episcopal Church in Homewood and former president of Troy University in Montgomery, was recently elected to succeed the current bishop of Alabama, who is retiring. But Garner, who is rector of St. Paul's Episcopal Church in Fayetteville, was on the short list of nominees for the position. Having just moved to Fayetteville when the Rev. Lowell Grisham retired, he wasn't ready to move on.

"When they asked me why I wanted the job, I told them plainly that I didn't," he says of the interview process in Alabama. "I didn't want to be a bishop, and I didn't want to give up the fruitful ministry that I enjoyed here.

"But I told them I was willing to be a part of the process and was willing to serve as their bishop because I recognized that I had gifts that met their needs at this particular moment in the life of that community," Garner says. "As a priest and as a follower of Jesus, my job -- my calling -- is to be faithful. That means offering myself and my gifts to the ministry of the church.

"Ultimately, I was willing to let someone nominate me because I trusted that what was right would work out in the end, and it did. Right now, and I presume for several years ahead, I'm called to stay here and be the rector of St. Paul's, and I joyfully accept that call."

Garner honestly didn't expect to be called to be a priest, let alone a bishop.

"I grew up in lower Alabama, on the Gulf Coast," he explains. "Our family always went to church. I cannot remember a single Sunday when we did not go unless someone was sick or we were out of town on vacation. Even then, if we had the chance, we would go to church in whatever town we were visiting. Church was not only the place we went on Sunday mornings and Wednesday nights, it was our community -- like an extended family. Growing up active in the church, I always assumed I had a place in the Christian community. Nevertheless, although I sang in the choir, rang handbells, participated in youth group, and even preached a few youth sermons, I never considered a career in ordained ministry."

That changed when he was a second-semester freshman in college, where his career path was aimed at teaching chemistry.

"During my second semester, I engaged a daily discipline of study, silence and prayer," he remembers. "I had enjoyed myself a little too much during my first semester, and I had a desire to rebalance my life. So, every night, on my way back to my room from studying, I would stop by the chapel for some quiet time with God. It was during that season of reflection that I sensed strongly a call to be a priest."

Garner sat down with his hometown minister, who encouraged him to "relax" and see how he felt a few years down the road.

"And, sure enough, when I was a senior, I still couldn't shake the sense that I was called to be in close, spiritually intimate pastoral relationships with people during the big moments of their lives -- births, baptisms, marriages, and even illness and death," he says. "It felt strange to want to be present with someone during such difficult times, but, as I presented that sense of call to other people in the church, they heard it as evidence of a call.

"For me, the hardest part was giving up the dream of being a chemistry professor."

Garner still thought he'd teach, but as a seminary professor -- until his first church, in Montgomery, Ala., changed his heart. "I fell in love with parish ministry." After a stint there and another as rector at a church in Decatur, Ala., he heard that Grisham was retiring from a long and storied career at St. Paul's.

"I had known Lowell Grisham for years and had never met a person who loved his job as much as Lowell," Garner says. "I always wondered what sort of church would keep a fun, energetic, faithful man like Lowell as excited and interested as he had been. I had no family or friends in Arkansas except for Lowell, but his energy and enthusiasm were compelling. I said yes, and, before I knew it, I was interviewing with a search committee and, not long after that, accepting a call to move to Fayetteville.

"This is a church that welcomes everyone, including the new kid," Garner says. "My family and I have felt the love and warmth of this congregation from the moment we arrived. The challenges I experienced were trying to get my mind around such a big organization with so many important ministries within the congregation and out in the community. There are tons of names to remember and personal stories to learn, and, even a year and a half in, I am still learning both. Still, the people of this parish never gave me the impression that I needed to prove anything before they would accept me as their rector. That was an incredible gift.

"Another gift that this congregation has offered is an unfailing willingness to try new things. Although steeped in tradition, I have never felt like anything was "off-limits" with regard to changing something or experimenting with something new."

So, now that he expects to stick around, Garner says what's next for St. Paul's is "more of the same -- celebrating and sharing God's infinite grace, acceptance, and love with each other and the community. This is a remarkable church--the best congregation I have ever been a part of -- and it is an honor and privilege to serve at St. Paul's."