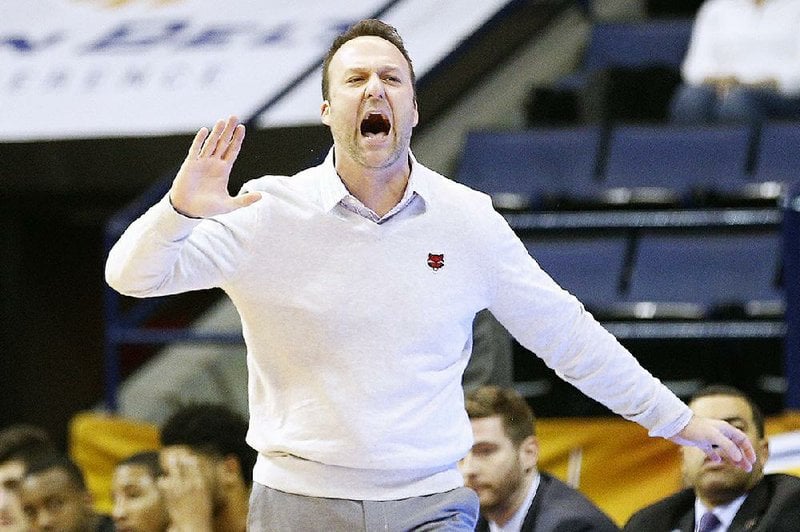 Mike Balado did something last week he can't remember doing for more than two decades.

The Arkansas State University men's basketball coach couldn't contain himself as he jumped onto a media table that sits on one of the baselines at First National Bank Arena in Jonesboro and faced the Red Wolves' student section.

ASU had just beaten South Alabama 75-71 for its 14th victory of the season -- surpassing the previous season's win total. Balado held up his right hand toward his right ear, palm facing out, as the mass of ASU students jumped and screamed.

"I've done box jumps when I was playing in college, but I haven't done one since like 1998," Balado said Friday with a touch of sarcasm. "My back was hurting a little bit."

What exactly prompted him to get on that table?

"I was just very happy to see the turnout of the students, and I wanted to show my appreciation for them being out," Balado said. "We had a great turnout [Thursday] night. Hopefully [we'll] have one [today]."

In what's been an uptick this season for most of the major men's basketball programs in the state -- Eric Musselman's Arkansas Razorbacks are 15-5, and Darrell Walker's UALR Trojans are 16-7 and lead the Sun Belt -- Balado's Red Wolves have experienced their own turnaround.

Despite Thursday's 71-64 home loss to Appalachian State, which snapped ASU's three-game winning streak, the Red Wolves (15-8, 7-5 Sun Belt) remain in the upper echelon of the conference. ASU sits alone in fourth, three games back of first, as it hosts Coastal Carolina (11-11, 4-7) and star point guard DeVante' Jones today at 4 p.m. in Jonesboro.

Jones is averaging 15.8 points per game and a Sun Belt-leading 5.3 assists per game.

"He's an exceptional player," Balado said. "I think we call him the head of the snake. He's very savvy with the ball, can hurt you in a lot of ways."

In the third year of his tenure, Balado has ASU on pace to finish with his first winning season -- and just the program's second in the past six years -- and his best finish in the Sun Belt.

"I thought that we were trending upward, even before we played a game. I think that's still the case," Balado said. "We're sitting right now a solid fourth and with a chance to move up, and that's always such an important thing to do down towards the end of the season because of seeding for the conference tournament.

"We've got to continue to win. Good teams kind of hit their peak and are peaking in February and March, and that's where we got to be."

Balado's club has benefited from a more balanced attack on the offensive end and better depth. The Red Wolves aren't heavily reliant on one player much like they were the past two seasons with former guard Ty Cockfield. Balado is able to employ a nine-man rotation.

"Every game it's been somebody different being able to step up," Balado said. "We're still playing nine guys into conference play, and we haven't shortened our bench because we feel like everybody at any given time can give us something."