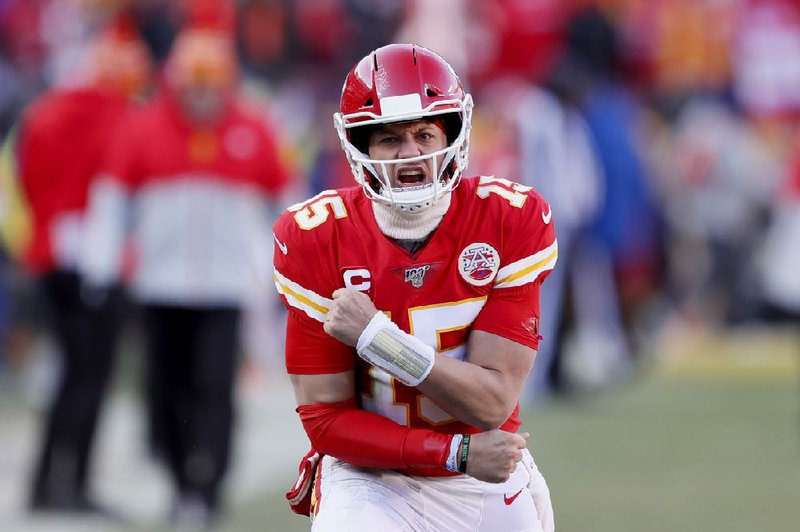 Patrick Mahomes, the Kansas City Chiefs’ 24-year-old star quarterback, seemed destined to be a star athlete, according to family and friends who knew him while he was growing up in Whitehouse, Texas. Mahomes leads the Chiefs against the San Francisco 49ers today in Super Bowl LIV.

WHITEHOUSE, Texas -- Seconds after the kneecap popped out of place and shifted into his thigh, Patrick Mahomes lay motionless on the field. His hands shielded his face.

Teammates couldn't bear to look, an injury so visibly gruesome one of them sprinted in the opposite direction, removed his helmet and slammed it into the grass.

As the cart rolled onto the field, a doctor snapped the kneecap back into its groove, a force jarring enough that broadcasters warned viewers to turn away. Inside a suite in Denver, Kansas City Chiefs owner Clark Hunt feared his franchise-changing quarterback would be lost for the season.

But minutes later, back in Mahomes' east Texas childhood home, his mother's phone rang. The name on the screen surprised her.

In Kansas City, fans feared the Chiefs' greatest quarterback in half a century might have, at only the tantalizing start of his career, suffered a crippling injury.

In his hometown of Whitehouse, they knew Mahomes had prepared for this. They knew he would not be dwelling on the present but instead hatching a plan to keep the Super Bowl in reach.

Because they knew the kid before the world was introduced to the quarterback who could soon sign a $200 million contract.

"No one in his inner circle was saying, 'Damn, bro, this is terrible.' He blocks that out," said Bobby Stroupe, Mahomes' personal trainer for more than a decade now. "That's how he's always been."

Today, at only 24 years old and barely three years removed from college, Mahomes will attempt to lead the Chiefs to their first Super Bowl trophy in 50 years. He is no longer an under-recruited high school athlete from small-town Texas, but rather the NFL's most marketable player and perhaps its most skilled.

His mother, Randi Mahomes, will tell you her son's resolve led him to this, a look-ahead mentality she sometimes tried to break just so he would take time to enjoy the good moments.

Stroupe will tell you that just four days after accepting last year's NFL MVP award, Mahomes walked into his office, asked not to talk about that honor and requested a workout schedule.

"Patrick has always handled himself as a professional, even at 9 years old. I mean from Day One," his friend Pat Day said. "I mean, people don't believe it sometimes. The kid, when I tell you we knew he was going to be special and a star at some point, that's because he was different in every aspect."

The rest of the world knows now what Whitehouse knew then.

During a little league baseball tournament, Mahomes and his grade school teammates had been chewed out by their coach. The players sat quietly, unsure how to respond.

On his own volition, Mahomes stood up.

The man who willed the Chiefs back from a 24-point deficit in an NFL playoff game with both his play and a sideline speech is the boy who reminded his friends that day they comprised a talented group.

They would go on to win that tournament.

"He was always the cool, calm and collected one," said Jake Parker, one of his best friends since childhood. "Ask anyone, and you'll hear that from 10 out of 10. He always just knew so much more, and was just so much more mature at a younger age because of what he had just seen through his dad."

The path to sports emerged quite naturally -- Mahomes' father, Patrick Sr., pitched for 11 seasons in the major leagues. And Mahomes therefore conversed with some of baseball's biggest stars.

But he wasn't born into a life of luxury.

"No, nuh uh," Randi Mahomes said last week at Holly Tree Country Club in Tyler, Texas, where she has worked for the past 15 years.

Randi and Mahomes Sr. divorced when Patrick was in fourth grade. Randi Mahomes began working at Holly Tree and requested extra shifts on nights and weekends to support her kids, leaving Patrick at home to look after his younger brother, Jackson.

Short on money, she pulled Mahomes out of private school, moving him to the Whitehouse School District. She could only guess at how the major life transition affected her oldest son -- he didn't vocalize any complaints.

"I think, with my mom, the biggest influence she gave me was just hard work," Mahomes said last week in Miami, site of today's Super Bowl against the San Francisco 49ers. "I mean, every single day doing her job and then going to my games and just being there every single day. That shows me no matter what your situation is, if you put in hard work, you will succeed."

His high school coach will say that on the bus ride home from his final football game, a playoff loss, Mahomes contacted the basketball coach and requested to be in uniform the next evening. And he was. In the next game, he made a highlight-reel pass the coach still saves on his phone.

As a young kid, Mahomes literally would forget to take home tournament trophies from baseball complexes, and he would shrug when his mom asked where they were. He was so even keel before or after games that Randi Mahomes said watching him fire up a crowd inside Arrowhead Stadium "still to this day kind of throws me."

As a high school sophomore, Mahomes wasn't picked to start at quarterback. They played him at safety. As a junior and senior, he was under-recruited. Had to play behind two NFL quarterbacks at Texas Tech, and had some NFL Draft pundits label him a mid-round pick.

All of it might motivate some athletes. Mahomes? He simply didn't seem to care.

Mahomes carefully built a network of like-minded people and support around him.

His trainer. Inside Stroupe's owned APEC gym, a bundle of "speak life" quotes, as he calls them, are painted on the walls. "No pity parties in here," Stroupe said.

His friends. When they get together, they forget they're hanging out with the youngest NFL quarterback to throw for 5,000 yards and 50 touchdowns in a season. They wonder if he forgets, too, and they wonder if that's intentional.

His faith. A photo in his high school yearbook depicts his inclusion in a Bible study group.

"I think it is very important to be a leader of faith because God gave me a talent that I realize [He] gave [me] for a purpose to show my beliefs and to lead people to him," Mahomes wrote.

And his girlfriend, his high school sweetheart, Brittany Matthews. The couple started dating in high school, Mahomes a sophomore and Matthews a junior. Friends call Matthews "his rock." And as Stroupe puts it, "She keeps stress off him. Patrick is not a confrontational person. It's understated what she does."

Mahomes, a player popular enough to have more than 2 million followers on Instagram, has stuck with the pillars rooted in a town of 8,000.

Three days after last year's Super Bowl, and just four after he became the youngest player to win the league's MVP award in 35 years, Mahomes arrived at APEC gym in Fort Worth.

He had watched the Rams and Patriots in virtual agony, two weeks after the Chiefs' overtime loss in the AFC Championship Game. So when he walked into APEC to meet with Stroupe, Mahomes spoke first.

"I don't wanna do that again," he said. "I wanna win the Super Bowl. That's all I care about."

There's a theme to each of Mahomes' workout seasons. Two years ago, it was nutrition. Earlier, speed.

This offseason, Mahomes wanted to better prepare his body for the rigors of the NFL season. He felt less than 100% during the playoffs. So he and Stroupe wanted to design a program to better prepare the body to respond to injuries. They adequately summarized the theme with one word.

"Always looking ahead," Stroupe said. "Always wondering, 'How can I get better?' "

No one in Whitehouse seems to understand exactly where that trait derived. Why he's able to focus on what comes next and not dwell -- nor celebrate -- what came last.

They just know it's always been part of his character.

"Everybody was coming for Patrick every single game we played," Parker said. "But nothing affected him. There's nothing you can say or do to get to him."

Well, maybe there's one thing you can do, his friends acknowledged.

Mahomes doesn't anger much. By all accounts, he's not confrontational. But his best friends know when they're under his skin.

"If you get up or you get ahead of him, he tries to find ways to get at you," Coleman Patterson said.

"When Patrick loses, he doesn't get pissed off," Stroupe said. "He wants to run it back."

That's essentially what he has in Miami today: A chance to run it back and erase the heartbreak of January 2019 while delivering a fan base that has waited 50 years for a real celebration another championship. 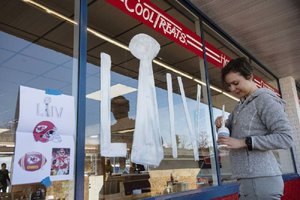