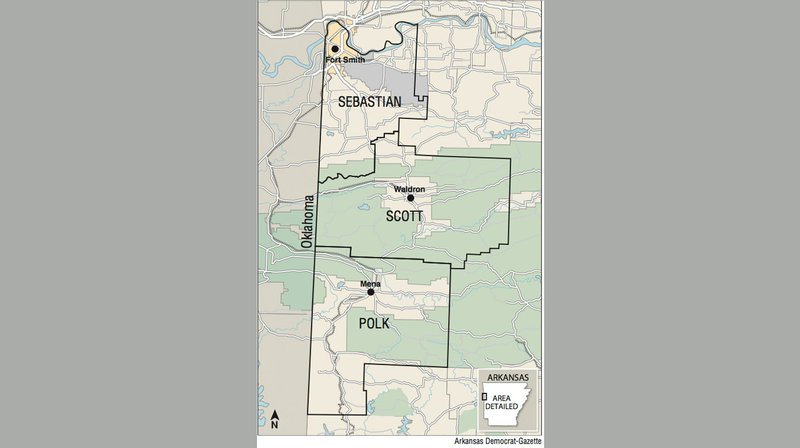 An Arkansas county has declared that it won't enforce any laws it deems unconstitutional -- including laws restricting guns.

Declaring itself a "Bill of Rights sanctuary," Scott County is the first Arkansas county to follow a wave of hundreds of cities and counties nationwide that have declared themselves "Second Amendment sanctuaries."

The movement prompted Mike Rainwater, an attorney for the Association of Arkansas Counties Risk Management Fund, to send a letter Friday to all 75 county judges in Arkansas with the subject line: "Proposed County Sanctuary Ordinances - BEWARE!!"

"There are county sanctuary ordinance proposals going around that need to be carefully scrutinized," Rainwater wrote. "At face value, these proposed ordinances appear to be in line with the traditional notions of our historical rights as citizens. But these proposals go much deeper. The real effort is to set the county in opposition to the constitutional system that has served us well for 200+ years.

"The good news is that all of this was anticipated long ago by the framers of our 1874 Arkansas Constitution," Rainwater wrote. "There is simply no need for any county to declare itself a sovereign jurisdiction that has stepped forward to create some sort of sanctuary for the protection of the individual rights of its citizens. That is the job of the state and it has already been done by the state of Arkansas. It is the state that is sovereign; not its counties."

In an earlier, Jan. 27 letter to county judges, Rainwater wrote: "With talk about so-called 'gun-sanctuary' laws going around, please ask your quorum court members to read the Declaration of Rights already contained in the Arkansas Constitution."

Listed as Section 5 among those rights, it says "The citizens of this state shall have the right to keep and bear arms, for their common defense."

In an email, Chris Villines, executive director of the Association of Arkansas Counties, said Rainwater "wants to direct them to us to review any county resolutions or ordinances to make sure they wouldn't create a liability which could jeopardize taxpayer funds."

The "Second Amendment sanctuary" movement is a response to "sanctuary cities," where local police limit how much they enforce federal immigration laws.

"Cities and counties are not required to enforce federal immigration law in any way," according to the Southern Poverty Law Center.

The "Second Amendment sanctuary" movement spread across several Western states and has taken root in Virginia since November, when Democrats took control of the House and Senate, paving the way to approve gun-control measures that Democratic Gov. Ralph Northam vowed to pursue after a shooting in Virginia Beach killed 12 people in May.

Unlike Virginia, Arkansas has a Republican governor and all-Republican congressional delegation. Democrats, in general, have been more likely to advocate for gun control.

James Forbes, the county judge in Scott County, said his county's ordinance has nothing to do with politics.

"This is a nonpolitical statement," he said of the ordinance. "This is not anything along party lines. It simply puts that this county supports the Constitution and the Bill of Rights."

"They're in a reactive mode right now," he said of Virginia. "We're being proactive."

Located on Arkansas' western border, Scott County had a population of 11,233 the last time the census was taken, a decade ago.

Instead of making a declaration involving only the Second Amendment, Scott County's ordinance included the Bill of Rights, which is the first 10 amendments to the U.S. Constitution.

Forbes said the ordinance, passed unanimously by the Quorum Court on Jan. 21, is about protecting the entire Constitution and all the Bill of Rights, which includes freedom of religion, speech and of the press.

But, Forbes said, it's the Second Amendment that's currently under fire.

"That is probably the biggest amendment that people feel is under attack," he said.

The Second Amendment to the U.S. Constitution states: "A well regulated militia, being necessary to the security of a free state, the right of the people to keep and bear arms, shall not be infringed."

Forbes said he began drafting a Bill of Rights ordinance a couple of months ago. Representatives from the Arkansas Liberty Coalition offered a proposed ordinance, but Forbes said it was too narrow in focus.

"I told them that I would not do just a Second Amendment ordinance," Forbes said. "I'm working on a Bill of Rights ordinance."

W. Whitfield Hyman, a Fort Smith lawyer who helped draft the proposed ordinance for the Arkansas Liberty Coalition, said it was a public relations move by Scott County to include all of the Bill of Rights.

"They don't want to seem like gun nuts," Hyman said.

"It doesn't have anything to do with gun nuts," Forbes said. "This isn't about just the Second Amendment."

Hyman described his proposal as a "constitutional-rights ordinance," not a "Second Amendment ordinance."

Forbes said he used a "few statements" from the Arkansas Liberty Coalition's proposed ordinance, but the final approved Scott County ordinance involved input from many people including the Quorum Court.

Forbes said Ordinance 2020-2 was read three times and passed unanimously at the Jan. 21 meeting. An emergency clause put it into effect immediately.

All "new and renewed" county employees will be required to sign a copy of the ordinance indicating they have read and understand it. If they violate the ordinance, they could be fined $500 and/or fired.

Howard Brill, a law professor at the University of Arkansas, Fayetteville and a former chief justice of the Arkansas Supreme Court, said the ordinance raises many questions.

"Does this ordinance conflict with state law?" he asked. "Perhaps most significantly, the Scott County ordinance says that any federal law that conflicts with the ordinance shall be null and void. Government officers take an oath to uphold the Constitution of the United States, which includes the Supremacy Clause. The ordinance states that any employee who does not adhere is 'subject to termination,' raising the prospect of more litigation.

"While a county may wish to enact a resolution proclaiming its belief in the Second Amendment, and perhaps an ordinance determining the actions of the county within its limits, it is far different for the county to declare itself superior to state and federal law."

Scott County's ordinance has a section listing some of the "unlawful acts" that the county won't enforce, which include but are not limited to:

• "Any prohibition, regulation and/or use restriction related to ownership or the constitutionally guaranteed lawful use or carry of firearms."

• "Any act forbidding the possession, manner of carry, ownership, or use or transfer of any type of firearm, firearm accessory or ammunition by citizens of the legal age."

• Any tax, levy, fee or stamp imposed specifically on firearms, accessories or ammunition but not common to all other goods and services.

• Any registration or tracking of firearms, accessories or ammunition.

• Any registration or tracking of the owners of firearms, accessories or ammunition.

• Any act ordering the confiscation of firearms, accessories or ammunition from citizens.

• Any use of county funds or funds given to the county to participate in a "gun buyback" program.

Hyman said he wrote most of the section regarding "unlawful acts."

"The courts have held that most of the things Scott County lists in the 'illegal acts' section are constitutional for governments to engage in," Hyman said in an email. "Scott County and I apparently disagree with the courts.

"The county has ultimate control over what they decide to fund, so the ordinance is legal," he said.

In an article with his letter to county judges Friday, Rainwater wrote: "Counties have no power as separate sovereigns. Not only are counties not independent sovereigns, it would be a violation of state policy to allow counties to act sovereignly by somehow purporting to carve themselves out as a 'sanctuary' where the law of the state is different than, or enforced in a different manner than, the rest of the state."

When asked about the ordinance's focus on the Second Amendment in the "unlawful acts" section, Don Cloud Davis of Mena, a spokesman for the Arkansas Liberty Coalition, said "it did get a little heavy with the Second Amendment, but that's just the state of mind over in this part of the country."

Davis said the coalition is a nonpartisan organization that works to "educate people on the Constitution, their rights and engagement."

In response to a question, Davis said the coalition hasn't been "pushing" counties to enact ordinances similar to the one approved by Scott County.

"If a county wishes to do so, we would be more than happy to collaborate," he said. "We're not pushing anybody."

"We're not strictly Second Amendment," Davis said. "The Liberty Coalition is focused on the entire Constitution. We could look at anything. If it's a violation of the Constitution, we'll probably want to talk about it."

Davis said people are hearing that immigrant "sanctuary cities" may be coming to Arkansas, and people don't like what they hear.

"People out here with boots on the ground are just tired of this," he said. "They want to know that their little corner of the world is safe."

Hyman, a Libertarian candidate for Justice of the Peace in Sebastian County, said he has written proposed "constitutional-rights sanctuary" ordinances for Benton and Sebastian counties.

Barry Moehring, the county judge in Benton County, said a committee of the Benton County Quorum Court will discuss such an ordinance on Feb. 18.

"We're just at the front end of considering something like this," he said. "However, you do need to put into context the appropriate role of county government with that state Constitution and the U.S. Constitution. And we are subservient to those. ... I wouldn't want to do something as a county that wouldn't have any practical impact."

"From what I've seen today, I don't think our Second Amendment rights are in jeopardy."

"It's really dangerous the way they have it," Bell said. "I think I understand their intent, and I agree with their intent. But it's dangerous for several reasons."

Convicted felons are exempt, according to the ordinance. But it also exempts people "who may be in the future convicted of felony crimes."

"It literally is a circular ordinance from the beginning because it exempts everybody," he said.

Based on the ordinance's wording, deputies in Scott County can't take a gun away from a person arrested for a misdemeanor crime before putting him in jail, Bell said.

"We could take it from him until he gets out," Shores said. "He can't take it into jail with them. We don't even carry them back there. There are certain places you can't carry guns, federal buildings, banks, things like that."

But Bell said that's not what the ordinance says.

"In Scott County today, it would be illegal for anybody who is on the county payroll to prohibit any non-felon who is not currently charged with a felony from possessing a firearm anywhere, including jail, a school, a courtroom -- anywhere," Bell said.

Forbes said Bell and others have been trying to read problems into the ordinance.

The ordinance makes no changes to current state and federal law regarding where guns are prohibited, he said.

Saying people arrested for misdemeanor crimes could have guns in jail, "that's like saying I'm going to stand in a puddle of gas and throw a match at it," Forbes said. "Why would you do that?"

A severability clause in the ordinance means that if any part of it is found to be unconstitutional, that part could be removed but the rest of the ordinance would still be enforced, Forbes said.

When asked about Ordinance 2020-2, Travis Plummer, the county attorney for Scott County, said in an email "The opinion of the 15th Judicial District Prosecuting Attorney's office is that any ordinance that conflicts with state or federal law is void and unenforceable."

Tom Tatum II, the prosecuting attorney for the judicial circuit, couldn't be reached by telephone Friday.

Amanda Priest, a spokeswoman for the Arkansas attorney general's office, said that office would have no comment on the issue.