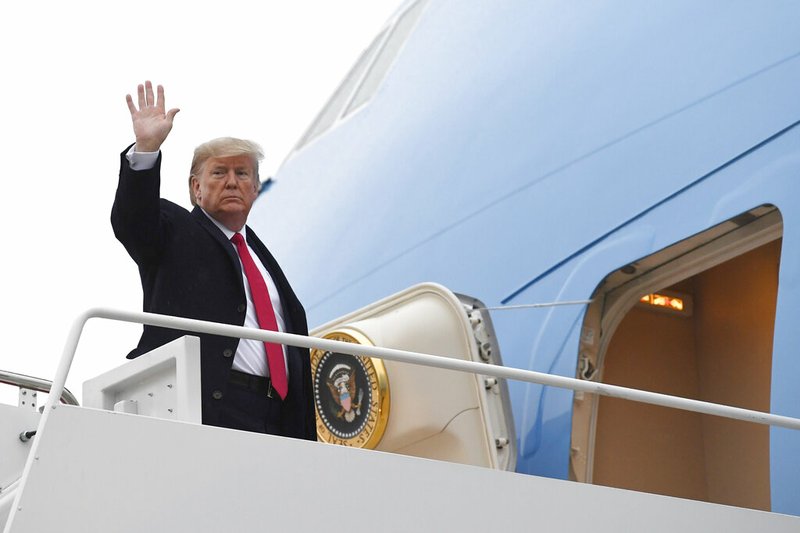 President Donald Trump waves from the top of the steps of Air Force One on Friday at Andrews Air Force Base in Maryland. Hours after the president left with the first lady to spend the weekend at their Mar-a-Lago estate, his administration acknowledged the existence of emails revealing the president's thinking about withholding aid to Ukraine. (AP / Susan Walsh )

Hours after the Senate voted against seeking new evidence in the impeachment case against President Donald Trump, the administration in a court filing acknowledged the existence of two dozen emails that reveal the president's thinking about withholding military aid to Ukraine.

The Justice Department late Friday filed a response to a lawsuit seeking access to unredacted copies of those communications. Heather Walsh, a lawyer for the Office of Management and Budget, wrote to the court that of the 111 redacted emails in the lawsuit, 24 of those emails were protected under "presidential privilege."

"Specifically, the documents in this category are emails that reflect communications by either the President, the Vice President, or the President's immediate advisors regarding Presidential decision-making about the scope, duration, and purpose of the hold on military assistance to Ukraine," Walsh wrote.

The crux of the impeachment case against Trump is whether he used $391 million in military aid to Ukraine and a coveted White House meeting for Ukrainian President Volodymyr Zelenskiy as leverage in an attempt to get the foreign leader to conduct political investigations, including one focused on former Vice President Joe Biden. In a July 25 call, Trump had asked Zelenskiy to "do us a favor."

The Senate on Friday voted 51-49 to block witnesses and other new evidence, clearing the way for a vote on Trump's acquittal this week. Trump and administration officials had stonewalled the House impeachment investigation, refusing to allow some witnesses to testify and to provide requested documents.

The Senate is expected to conclude the trial with a final vote Wednesday.

Trump and Senate Majority Leader Mitch McConnell of Kentucky spoke by phone Friday night to lock in the schedule as rushed negotiations proceeded on and off the Senate floor. The trial came to a standstill for about an hour. A person unauthorized to discuss the call was granted anonymity to describe it.

The president wanted to arrive at the Capitol on Tuesday for his State of the Union speech with acquittal secured, but that will not happen. Instead, the trial will resume Monday for closing arguments, with time Monday and Tuesday for senators to speak. The final vote is planned for 3 p.m. Central on Wednesday, the day after Trump's speech.

Trump's acquittal is likely in the Senate, where his GOP allies hold the majority. Conviction and removal from office would require a two-thirds majority.

Despite the Democrats' focus on hearing new testimony, the Republican majority brushed past those demands and will make this the first impeachment trial without witnesses. Even Friday's revelation of more allegations from former national security adviser John Bolton did not sway GOP senators, who said they'd heard enough.

Rep. Val Demings, D-Fla., a House prosecutor, said that means the eventual outcome for Trump will be an acquittal "in name only."

Senate Minority Leader Charles Schumer referred to the decision not to call witnesses as "a tragedy on a very large scale."

But Republicans said Trump's acquittal is justified and inevitable.

"The sooner, the better for the country," said Sen. Lindsey Graham, R-S.C., a Trump confidant. "Let's turn the page."

Why Trump wanted Congress-approved assistance to Ukraine delayed is the central question of his impeachment and was the greatest point of tension in the Senate trial.

Many of the witnesses who did testify in the House impeachment investigation hadn't been given an official reason.

William Taylor, who served as acting U.S. ambassador to Ukraine, recalled during his Oct. 22 deposition that he learned of the decision during a July 18 conference call, when an Office of Management and Budget aide said the security assistance was being held but couldn't say why.

"All that the OMB staff person said was that the directive had come from the president to the Chief of Staff to OMB," Taylor said. "In an instant, I realized that one of the key pillars of our strong support for Ukraine was threatened."

During the Senate trial, House Democratic managers argued there was sufficient evidence to conclude that the president was using the money as leverage to pressure the Ukrainian government to launch a public investigation into Biden and his son Hunter Biden.

But White House defense lawyers argued during the Senate trial that Democrats couldn't prove motive. The lawyers suggested it was possible Trump had mixed motives in placing a hold on the aid, both personal and in the public interest.

The House managers said that was why they wanted the Senate to subpoena additional documents and witnesses with firsthand knowledge of the president's thinking, such as acting Chief of Staff Mick Mulvaney and Bolton.

Rep. Adam Schiff, D-Calif., who led the House prosecution case, warned Friday that the contents of such emails will eventually be public.

Sen. Lamar Alexander, R-Tenn., said there is no question that Trump's actions were "inappropriate" when he asked Ukraine's leader to investigate Democratic rival Biden.

But they were not bad enough, he said, to warrant Trump's removal from office, or even to hear from witnesses or see other evidence.

GOP'S STANCEThat distinction has been embraced by other Republicans. It's also in line with arguments from Trump's legal team, which after initially asserting that the president did "absolutely nothing wrong" moved toward insisting that Trump had done nothing impeachable -- and criticized the trial as a partisan exercise.

The evolving arguments have allowed Republicans to cite political and historical grounds for acquitting Trump without condoning his behavior, a judgment that avoids a clean break with the president as he stands for reelection.

Alexander, who is retiring from office at the end of the year, was the most vocal, saying he did not need to hear more evidence to conclude that Trump was wrong to ask a foreign leader to investigate a rival.

"But," Alexander said, "the Constitution does not give the Senate the power to remove the president from office and ban him from this year's ballot simply for actions that are inappropriate."

Inside and outside the chamber, the president's allies spent more time questioning the relevancy of content in Bolton's book than disputing its accuracy. Through their questions at the trial, Republican senators signaled a willingness to concede certain basic facts of the case, which made it easier for them to brush off calls for more witnesses. They insist they already have the information they need to make a decision.

"For the sake of argument, one could assume everything attributable to John Bolton is accurate and still the House case would fall well below the standards to remove a president from office," Graham said in a statement.

Trump's scrutiny by Congress won't end with his expected acquittal in the Senate. House Democrats have a list of inquiries they plan to pursue when the impeachment saga is over.

"The investigations and oversight will continue," said Rep. Carolyn Maloney of New York, head of the Oversight and Reform Committee, the lead investigative panel in the House. "We've got several cases."

Democratic-led committees in the House will keep seeking a wide variety of evidence and testimony as they look into Trump's administration, his policies and his businesses and finances. They also plan to keep a focus on his conduct in dealing with Ukraine.

In addition, there are multiple court cases running on separate tracks seeking access to his tax returns, testimony from former White House officials and financial records to show whether the president is unlawfully profiting from foreign governments. Three of the cases will be considered by the U.S. Supreme Court in the spring.

This all will be occurring in the middle of an election campaign in which both parties will be fighting for control of the White House and both chambers of Congress.

Democratic Rep. Raj Krishnamoorthi of Illinois, a member of both the Oversight and Intelligence committees, said Democrats learned some lessons from the impeachment inquiry, in which Trump refused to provide documents or allow testimony from White House officials.

"It just makes us more wizened and more knowledgeable about all the different ways the other side is going to evade oversight, and to plan accordingly," Krishnamoorthi said.

Rep. Kevin McCarthy of California, the House Republican leader, said he has no doubt that House Democrats will now intensify their Trump investigations. "That's their only agenda," he said.

The House Ways and Means Committee, led by Rep. Richard Neal of Massachusetts, is still seeking the president's tax returns from the Treasury Department. The House Financial Services and Intelligence committees -- chaired by California Democrats Maxine Waters and Schiff, respectively -- have in the courts been pursuing information from Trump's lenders, including Deutsche Bank AG and Capital One Financial Corp.

One of the cases before the Supreme Court involves Maloney's committee and centers on whether the Constitution prohibits subpoenas issued to Trump's accounting firm, Mazars USA LLP.

The committee wants Mazars to provide nonprivileged financial records relating to Trump and some of his business entities. Trump sued in April to block the panel's subpoena for eight years of financial records held by Mazars.

The committee also is pressing in federal court for documents tied to its investigation into the Trump administration's failed bid to add a citizenship question to the 2020 census.

Maloney and other House committee leaders said they aren't concerned about a backlash from voters fatigued by continuing investigations of Trump on top of the impeachment effort and Mueller's inquiry.

"We're not going to back off," said Rep. Bennie Thompson of Mississippi, chairman of the House Homeland Security Committee. He said that "so much of the information that chairpersons of committees need has been blocked" because of White House claims of executive privilege.