Nothing wasted at Revolution’s plant; investors interested by Andrew Moreau | February 2, 2020 at 1:46 a.m. 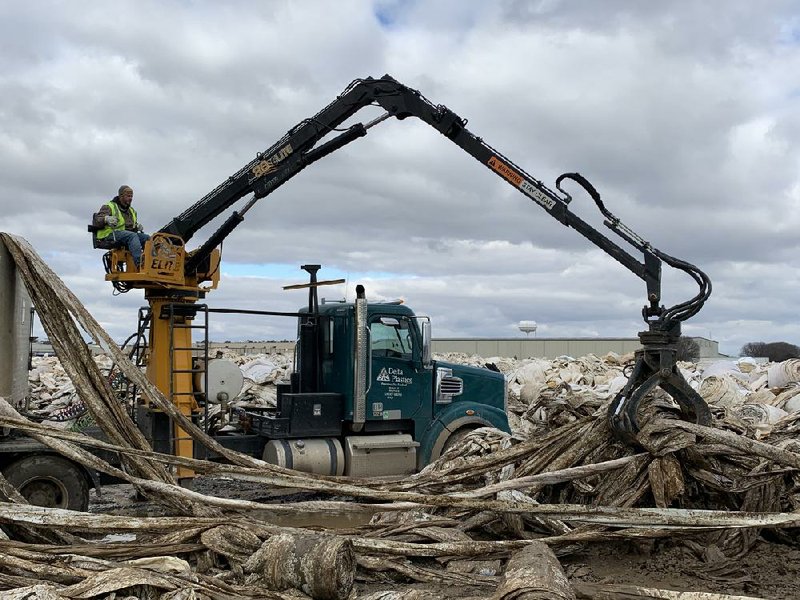 A Revolution Plastics employee in Stuttgart loads discarded irrigation tubing onto a customized truck to be carried to the company’s neighboring recycling plant. The company produces, distributes, collects and recycles the tubing for reuse by farmers across the nation.  ( Andrew Moreau)

There’s a revolution taking place in Arkansas, tucked away in a quiet corner of the industrial zone at the Port of Little Rock, that has gained financial support from investors in New York and Little Rock.

It involves farmers, retailers, restaurants, large industrial companies and consumers. In fact, some people probably carried a piece of the revolution home with them last night.

Revolution Plastics is taking a leading role in transforming the plastics industry and sustainability efforts across multiple industries. The Little Rock company is getting noticed, and gaining support, for its efforts.

The company’s primary weapon is a closed-loop system it uses in the plastics sector, allowing it to control how its products are recycled and manufactured.

In the next year, Revolution plans to add 100,000 square feet of manufacturing space — Chief Executive Officer Sean Whiteley said he’s hopeful that can happen in Little Rock — and invest upwards of $10 million to augment its main recycling site in Stuttgart. The Little Rock plant now runs 24 manufacturing lines in a 100,000-square-foot facility.

Revolution manufactures plastic products — trash bags, irrigation tubing for farmers, carry-out bags for restaurants — and then collects those products after use, cleans them and breaks them down into resin pellets that can be used to manufacture the products all over again.

“We promote and implement practices that sustain our environment for future generations,” Whiteley said. “That is a guiding principle, a core strategic value for our company. Every decision we make, every hire we make, is viewed through the prism of closed loop. “

For Revolution, promoting sustainability is a core part of its value proposition. And investors are jumping in with support, sailing on the tailwinds of the sustainability movement.

Last year, the company sparked competition between Stephens Group of Little Rock and Arsenal Capital Partners of New York to buy the business.

Arsenal Capital purchased a controlling stake in Revolution in July. Stephens was then invited to invest in the company in September. Those investments have armed the company with the capital it needs to expand.

Arsenal spent years examining the recycling sector — mapping and understanding the market — before bidding for Revolution, according to George Abd, operating partner at the investment firm.

“Culturally and ethically, the investors in our fund and the firm itself, are very interested in those areas,” Abd said. “There was a good match with Revolution.”

Once talks got underway, it was an easy decision, Abd said. “We believe we can work with Sean and the Revolution team to build a business that makes a real impact in the market,” he said. “This is a very exciting investment for us.”

Stephens’ interest in Revolution evolved out of the firm’s passion for conservation, said Managing Director Clay Hunter, noting that the investment was “both personal and business for us.”

“At the Stephens Group, we focus a great deal of our time in the engineered products sector looking for businesses not only benefiting from, but actively driving a variety of sustainable practices,” Hunter said.

Backing an Arkansas company sweetened the effort. “It doesn’t hurt that they also feel great to own,” Hunter said. “We’re actively searching for exactly these kinds of opportunities, in Arkansas and elsewhere.”

Arsenal didn’t waste time putting its capital to use. Two months after the Arsenal investment, Revolution purchased Pak-Sher of Kilgore, Texas, a leading provider of plastic packaging products used throughout the restaurant, deli and grocery industry.

Acquisitions have bolstered Revolution’s growth over the past few years.

The company has purchased Rodeo Plastics, an industrial plastic sheeting and bag manufacturer in Mesquite, Texas; and two California companies, Command Packing of Los Angeles, which produces carryout bags for the grocery and retail markets, and Encore Recycling of Salinas, which manufactures post-consumer resin through recycling.

That growth has contributed to employment growth in Arkansas. The company has a total of about 400 employees in the state located at a manufacturing plant in Little Rock, a recycling facility in Stuttgart and collection and shipping operations in Altheimer.

Across the nation, Revolution has 1,200 employees, compared with just 400 in 2012, with much of the increase coming through the acquisitions.

Employment and operations are likely to expand even more this year. Whiteley said the company will add manufacturing capacity through an expansion in either Arkansas or Texas. And it will invest at least $10 million to grow recycling efforts in Stuttgart.

“We are definitely going to expand — it’s just a question of where it will happen,” Whiteley said. “In the next 12 months we will add another 100,000 square feet of manufacturing space.”

Revolution began more than 30 years ago in Stuttgart by providing plastic irrigation tubing to farmers in the Delta region, focusing primarily on Arkansas, Louisiana and Mississippi. That product remains the foundation of its business and serves more than 10,000 farmers and dealers in the United States.

The company has 60 customized semi-trucks that have 50-foot dump beds and a crane to load materials. That fleet delivers the irrigation tubing to farms and then collects it from more than 5,000 points across the nation when the growing season is over. The polytube is all shipped back to Stuttgart for recycling and then forwarded to the Little Rock plant for manufacturing as new irrigation tubing that is delivered to farms in time for the next planting cycle.

“There is literally zero plastic waste in our process,” Whiteley said. “We pick it all up, clean it, recycle it and use it again in the manufacturing process.”

Along with the polytube irrigation, Revolution produces and recycles a thin polyethylene film that protects grapes, almonds, strawberries and other crops. It has developed mulch film that provides farmers with ground cover to lock in heat and control weeds. There’s also silage film for the dairy industry.

Revolution’s recycling process was a key draw for Arsenal, according to Abd.

“Recycling film is at the leading edge of the recycling industry,” Abd said. “It is very difficult and Revolution does it amazingly well. It is absolutely the market leader for high-quality, low-cost recycled film that can go into the same product it came out of and create that circular closed loop. It is truly a unique process.”

“One of the interesting things about this business is that there are multiple ways to expand on the technology and the products,” Abd added.

Revolution was founded as Delta Plastics in Stuttgart in 1993. The original recycling process was primitive – involving a garden hose, a mixer from a cement truck and a hand crank. The garden hose was fed into the mixer, which was cranked by hand to create enough friction to wash the irrigation tubing.

Before Revolution, the plastic was either burned or hauled to the landfill — neither process was environmentally friendly.

Today, that process — Whiteley calls it “the secret sauce of what we do” — uses technology from seven different industries, including dryers from the baking sector, in a multi-step process that cleans, shreds and minces the quarter-mile-long tubing into pellets that are melted and manufactured to create that same tubing and other products.

The entire recycling effort takes about 40 minutes and uses no chemicals, only heat and water to prepare the plastic for reuse. The effort churns out about 350,000 pounds of finished plastic a day.

Revolution uses up to 97% recycled materials to produce carryout bags for the restaurant and retail industries. Its customers include McDonald’s, Chik-Fil-A, Chipotle, Wendy’s and Target, among others.

Though it is expanding into other areas, supporting the agricultural community in the Delta is the foundation of Revolution’s business. “Our farmers are partners, and without them we wouldn’t have a meaningful sustainability program,” Whiteley said.

That commitment also will grow this year. Revolution is rolling out a new irrigation product to its farming base. The tubing used to water crops has been one-quarter-mile long; that will be doubled to a half-mile long in a product that is scheduled to be introduced at a trade show in Memphis next month.

“That’s going to be a great product that we’re excited to see coming,” said Brian Byrd, who farms 5,000 acres in Sunflower, Miss. “That means we can lay the pipe out faster and instead of doing four fields at a time, we’ll be able to do eight.”

Byrd has been a customer longer than he can recall, noting that delivery and collection of the tubing is important to his business. “They do a really good job of taking care of us and it’s a high-quality product that they provide,” Byrd said. “I don’t know how we’d work this without them.” 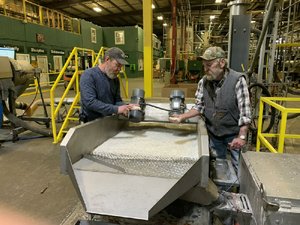