Plaza to be centerpiece of downtown renewal 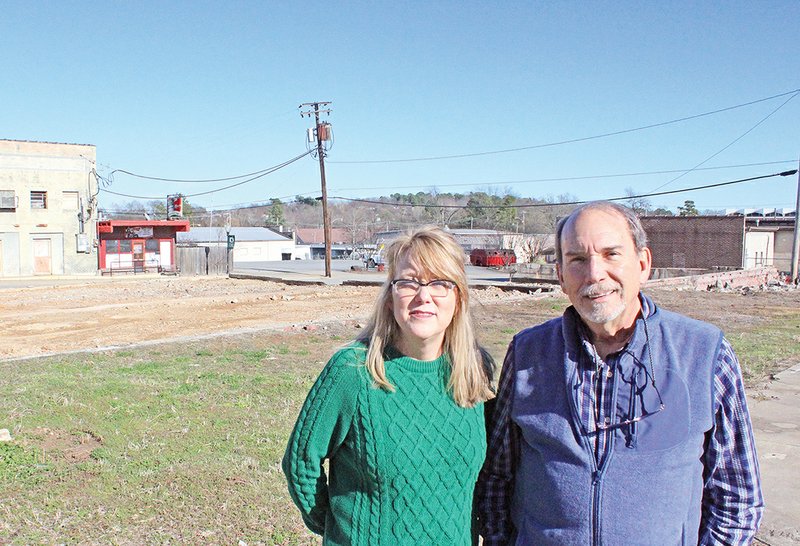 Jerry Smith, right, president and CEO of the Morrilton Area Chamber of Commerce and the Conway County Economic Development Corp., surveys the site of the forthcoming Holyfield Plaza with Stephanie Lipsmeyer, director of events and membership services for the chamber.

MORRILTON — Jerry Smith surveyed a vacant lot just off Morrilton’s main drag with a curious sort of wonder. To the outsider, the patch is just concrete-crusted rubble, remnants of a fire that claimed its resident structure years ago.

But Smith, president and CEO of both the Morrilton Area Chamber of Commerce and the Conway County Economic Development Corp., sees something else. His vision includes a community plaza buzzing with street dances, a farmers market and a hub for other community events — a central part of a brighter, more prosperous future here.

“That’s a key place downtown, one block off of Main Street,” he said. “My predecessor had looked at that property and asked someone to do an architectural drawing for an amphitheater. It just kind of sat there. No one jumped on it; not much happened.

“When we were going to purchase the property, I said, ‘I can get it. Let’s purchase it. Let’s build this.’ So, CCEDC did get the property; I believe it was early last year. That started the wheels rolling.”

Smith grew up in Morrilton, as did his wife, the former Betty Ann Mitchell, and in fact, Betty Ann’s great-grandfather E.E. Mitchell once owned the ground in question. There, Smith noted, E.E. Mitchell built a sizable hardware business in the 1920s after his original 1894 store burned to the ground.

“It was three stories with a basement, almost half a block. It was a big store,” Smith said, fishing out an antique photo of the place.

That store suffered a similar fate as its predecessor in a September 2009 fire that razed nearly an entire block. A write-up in the Arkansas Democrat-Gazette reported three buildings destroyed and streetlights melted by the intensity of a blaze that roared 50 feet over the three-story structure and could be seen 5 miles away.

Smith, who returned to his hometown after 40 years with Arkansas State University in Jonesboro to take over his dual role in 2014, was told he’d never be able to purchase the ground, but patient diplomacy with the building’s owner finally yielded his prize, he said. An adjoining property was also acquired in the closing days of 2019.

With the property in hand, members of the Conway County Economic Development Corp. began mulling the finer points of funding and designing the plaza, as well as what to call it. That’s when Rich Moellers, KVOM radio station manager, suggested naming the project after Wayland Holyfield, a Conway County native.

“Honestly, I got some confused looks about it,” Moellers recalled. “To make my pitch, I went back to the radio station, and I recorded a one-minute medley of [Holyfield’s] songs so people would know who I’m talking about.”

“I had to plead ignorance,” Smith said with a smile. “I was not aware of Wayland Holyfield. I’m not a big country-music fan, although I love Willie Nelson. But after Rich told us about him, we all agreed [Holyfield] deserved [the recognition].”

The committee may have been a little fuzzy on Holyfield’s contributions to country music, but history is clear. As per his bio in the Nashville Songwriters Hall of Fame — a group into which he was inducted in 1992 — Holyfield penned 14 No. 1 hits and more than 40 top-10 hits and earned nearly 40 ASCAP and BMI awards.

The chart-toppers include some of the best-known country songs of the modern era, including “Some Broken Hearts Never Mend,” “Till The Rivers All Run Dry” and Anne Murray’s recording of “Can I Have This Dance?” for which Holyfield received a Grammy nomination in 1972. The list of performers recording his work is a Who’s Who of country music, including Reba McIntyre, Tammy Wynette, Waylon Jennings, George Strait, Don Williams and fellow Arkansan Conway Twitty.

In 1986, Holyfield penned “Arkansas (You Run Deep in Me)” for the 1986 Arkansas Sesquicentennial, a tune designated one of Arkansas’ official state songs in 1987. Holyfield himself performed the song at Bill Clinton’s 1993 presidential inauguration.

Most importantly of all, Moellers said, Holyfield always showed pride for his Arkansas roots in general and his Conway County connection in particular. The songwriter was born in Mallet Town, where he lived until the age of 8, when the family moved to Little Rock.

“[Holyfield] went off to Nashville, but he still comes back and still has family here,” Moellers said. “He comes here every year, sneaks into town and leaves, and nobody knows. So I said we really ought to look at doing something to recognize him, and if [the plaza is] going to be a music venue, that just goes hand in hand. Let’s make that named after him.

“It didn’t take much of a sales effort once people realized we’ve got this guy here, and he’s very famous and very well-known, and people love his music. It makes it more than just a slab of concrete that we put a couple picnic tables on. We can make some displays and some different things to let people know that this guy came from here. Our community has something it can hang its hat on.”

From his home in Nashville, Tennessee, the 77-year-old Holyfield said he was humbled by the gesture.

“When Rich [Moellers] called me and outlined what the idea was, I said, ‘Wait a minute. I’m just a songwriter,’” Holyfield said with a laugh. “Now I’ve had some success as a songwriter, but it isn’t Johnny Cash or anything like that, but I was tremendously honored.

“As I told Rich, ‘Heck, I’m not going to try to talk you out of it if you want to name the plaza after me.’ People are proud of their own. I get back to Arkansas as much as I can.”

Holyfield said the influence of The Natural State runs through his catalog of songs, which share a simplicity of thought and language that is deceptively difficult to achieve.

“Certainly, influences come from everywhere,” he said. “When I wrote the Arkansas state song, I told the people who asked me to write it, ‘I’m going to treat it like a love song because that’s what I write.’ I’ve been married 48 years to Nancy Selig, now Holyfield. She’s from Faulkner County in Conway, just down the road.

“Your roots have so much to do with it. When you’re writing songs, if you don’t understand the truth, then that’s bogus. All my songs are based on truth.”

Jerry Smith said it would take about $300,000 to complete the plaza project that will bear Holyfield’s name, but Smith said he’s confident that hurdle can be cleared, and he’s expecting the plaza to be completed by the end of 2020. Considering that the CCEDC has already received $40,000 in donations just from people who heard about the project through the grapevine, it appears many are on board with the idea.

“Everybody’s excited,” said Stephanie Lipsmeyer, director of events and member services for the Morrilton Area Chamber of Commerce. “When you see dirt turning in a town like ours, everybody gets excited. This is going to be huge for our downtown.”

Lipsmeyer said that in addition to new programming and repurposing of the vacant space, the plaza is expected to inspire neighboring business owners to improve their properties, as well as attract new investment to the neighborhood.

“You see some of the building owners starting to fix up their buildings, whether it’s painting it or putting in a new awning,” she said. “This will be big for our downtown, with people visiting just to check things out and events we can bring here.”