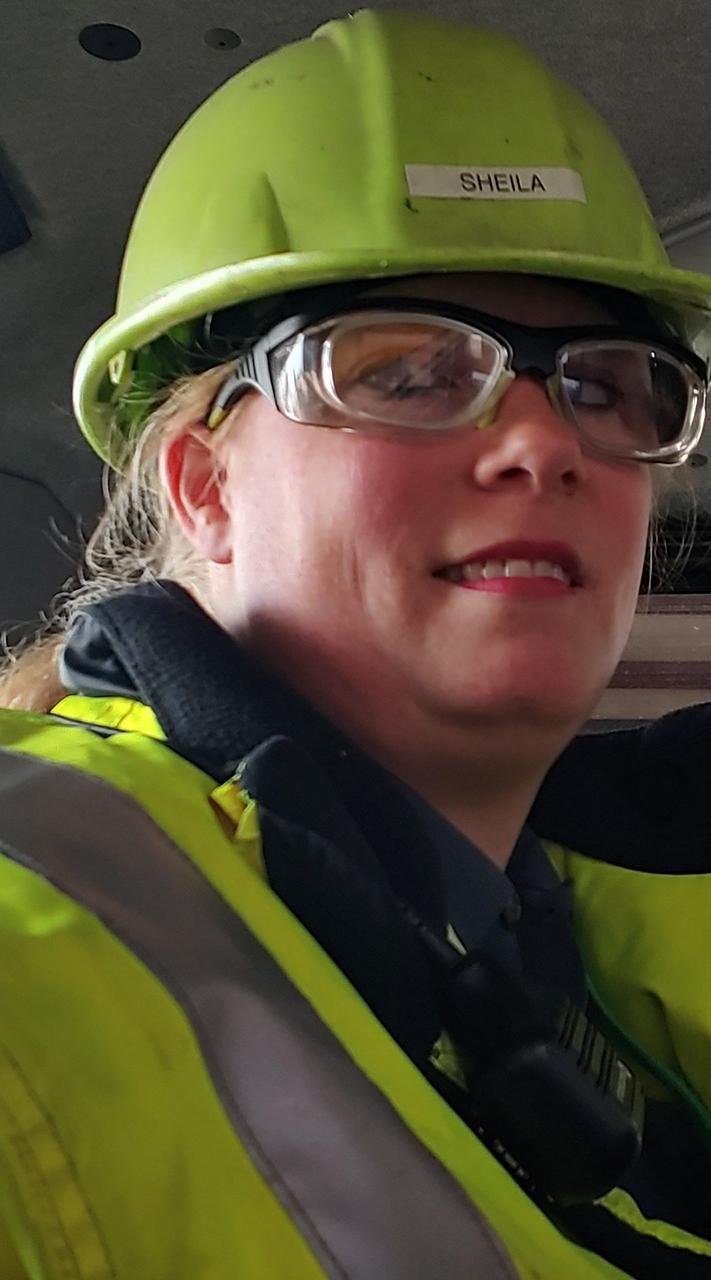 When residents of 100,000 Pulaski County homes fill up their green-and-yellow carts with milk jugs, plastic bottles and other recycled material to be picked up every week, chances are Sheila Walker handled it.

Up to 100 tons a day when the same material from other municipalities and private concerns outside Pulaski County is included.

Her job begins when a Waste Management Inc. truck backs into the company's material recovery facility at the Port of Little Rock and dumps its load on the floor of a small corner of the 35,000-square-foot building.

Walker's office is a cab atop a $200,000 12-ton Volvo H60 large-wheel loader she wheels around in an area of no more than 800 square feet to move the material offloaded from up to 20 trucks a day five, days a week. Each load weighs about 5 tons.

"Once it's on the floor, Sheila takes over," said Rusty Miller, who manages the facility. "She runs the show."

Walker uses the loader's bucket to move the material on the system of conveyor belts to the sorters and ultimately to the balers. On the other end of the building, she is just as comfortable using a forklift to load the baled material onto trucks to transport to customers who will reuse the material in their products.

The plastic bottles, for instance, go to a Mohawk Flooring plant in Georgia to be transformed into carpet.

The 31-year-old mother of two also can use the same bucket to go through the material and remove material that cannot be recycled such as garden hoses, VCR tapes and even Christmas trees and anything else that either cannot be recycled or threatens to shut down the conveyor belts.

She is a small cog in the Waste Management system, a $51 billion comprehensive company that expects to recycle 20 million tons of waste in 2020. Its headquarters is in Houston.

But no one among the company's more than 50,000 employees does what she does better. Walker has been named the company's loader of the year.

Her recognition isn't the typical employee engagement ploy, either, going well beyond a certificate and a photograph shaking hands with the boss to be featured in the company newsletter.

Walker and her husband, Chris, were scheduled to spend this weekend at the Waste Management Phoenix Open, a stop on the PGA Tour, where Walker will be honored at a ceremony.

It is a good thing her spouse was invited. Walker credits him for landing her an entry-level job sorting material on the conveyor belts in 2012.

"To be honest, my husband found it on Craigslist," she said.

Miller remembered when she was hired.

"We did a complete overhaul of the facility with all new machinery," he said. "We were down from April until September. We ran on a very limited basis. When we started in September, we needed help and Sheila was one of the very first ones that came and joined our team."

Walker worked as a sorter for about a year.

"She started out just as a sorter up on the line, either sorting milk jugs or bottles or paper," Miller said. "She worked her way through the sort line to the big loader and the little loader and the forklift and runs the scale for us, directs the trucks when they come in, where to dump."

Initially, Walker didn't strike Miller or anyone else as a candidate to operate the wheel-loader, which is akin to being the conductor for the orchestra that is recycling waste.

"The first time I met her I said she'd be the last person we would put in a loader," Miller said. "But she has sure enough proved everybody wrong and we don't want anyone else in the loader other than Sheila."

Her experience as a sorter helps with her job now.

"Since she's been here, she's done a little bit of everything," according to Miller. "She knows what we have to do to keep the floor clean and how much we have to put on the belt so we can have enough material to load the trucks out we have scheduled to take it out."

Even as Walker works the material, she has a sixth sense to know when a truck is pulling up.

"They're supposed to honk," she said. "But you have to keep your eye on them at all times. You can't let your guard down."

Indeed, safety is at a premium when working with heavy equipment, especially in a confined space. The safety aspects include her attire: From the hard hat fitted over her head to the steel-toed boots on her feet as well as the high-visibility vest, ear protection, safety glasses, work gloves and portable radio in between.

Walker isn't management, but she displays leadership qualities to get things done.

"She tell us when we need to run the cardboard and she does it in a way that they don't realize they're being told to do it," Miller said. After a while, she'll say, 'J.B., are you ready to run this cardboard?

Still, the job poses challenges, namely being the only female employee in a facility that has a workforce of up to 20, depending on the workload.

"I guess probably just trying to get these guys when I tell them something to take me serious," Walker said. "I'm the only girl out there in the plant. A lot of times they don't want to listen to me and they'll go find a guy out there and rather ask them than to listen to me."

Still, the award is a source of pride not only for Walker but her fellow employees well beyond the confines of the port facility. Walker is the first Waste Management employee in her four-state division -- Arkansas, Tennessee, Alabama and Kentucky -- to win the award.

"It's a source of pride for the region and the state and the MRF," Miller said. "For us to get in Little Rock, Ark., is a big accomplishment.

"Sheila has taken advantage of the opportunities that we've given her, that have been in front of her, and she's more than succeeded at what we've asked her to do and we're very thankful that we've got her. We really are."