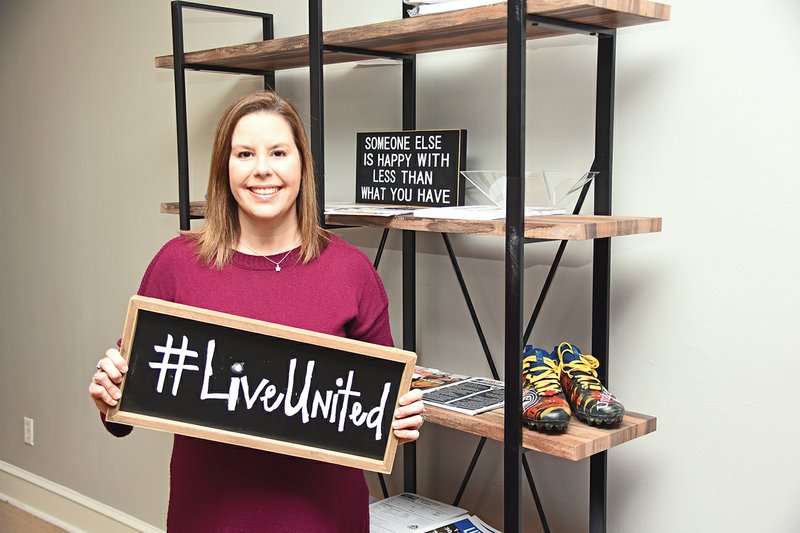 Jennifer Boyett is coming home again, and she is excited to have a fresh start.

“I can’t wait to get back,” said the Conway native, who spent her first 34 years in her hometown.

Jennifer Long Boyett was born in Conway to Ronnie and Rhonda Long, who had grown up in military families and arrived in Faulkner County after their parents retired. After graduating from Conway High School in 1997, Boyett moved across town to the University of Central Arkansas, where she majored in journalism and minored in political science. Before graduating in 2001, she served as editor of The Echo, the UCA student newspaper, and she married Corey Boyett.

Ten days after graduating in August 2001, she went to work at UCA as a communication assistant under Jim Brosam, who had succeeded Jim Schneider, the longtime director of public information.

“I really wanted [Schneider’s] job, but I hadn’t quite graduated, and by the time I graduated, Jim Brosam was hiring communication assistants,” she said. “It was super exciting to be able to stay on a college campus and to do journalism there.”

She earned a master’s degree in journalism from the University of Arkansas at Little Rock in 2005.

At UCA, the communication/publications/creative services areas were housed in the Advancement Office.

“I worked on the communication side of the Centennial Campaign, and as I learned more about what the fundraisers did, I became interested in that,” she said.

She asked Shelly Mehl, then UCA’s vice president for Advancement, about transitioning over, which she did following her maternity leave with her son Hunter, now 9. She started with corporate and foundation relations for a couple of years before moving into more individual fundraising under former Associate Vice President Kevin Braswell.

After Braswell moved on to Hendrix College, Boyett was promoted to UCA’s executive director of development and led a team of fundraisers.

“I was plugging along there, doing just fine, and Kevin called me on my birthday in 2013 and said, ‘Hey, I know you have aspirations to become a vice president someday, and there’s an opening at Henderson,’” she remembered.

She wasn’t looking for a job, but she said Braswell knew Glen Jones, the Henderson president, and thought they would hit it off.

“I thought it would be good practice, and I didn’t want to turn down an opportunity, so I said, ‘Sure; I’ll have a conversation,’” she remembered. “I liked the fact that Glen was an alumnus of Henderson and seemed to have a lot of passion for his new position. The foundation had split from the university, and this was bringing it back in closer partnership.”

Looking back, she said, if she’d thought about the offer too long, she “probably would’ve chickened out.”

“I was a Conway girl, born and raised, and I wasn’t looking to leave my hometown, my friends and family, our church home, but it sounded like a great opportunity for us,” she said. “I was only 34. I realize now why people don’t take on those positions until later in life.

“I learned a lot, though, and I’m really grateful for that opportunity. I’ve grown a lot, both personally and professionally.”

Her Henderson State story, however, didn’t end like she’d anticipated it would.

Jones resigned as president in July after questions arose about the institution’s debt, much of which resulted from outstanding student balances. After a sabbatical, he will return to faculty status in August.

In November, the HSU board of trustees approved a merger with the Arkansas State University system.

“I have had such a great experience here,” Boyett said. “We have had great growth. The foundation side of the house needed a lot of work, and so with my board, we did a lot of work to bring some better processes and professionalism to that area.

“For the marketing and communication side of the university, I think we did a phenomenal job of starting to tell the story of Henderson to prospective students. We redesigned the Web page twice, brought back the university magazine, increased our social-media presence, and regarding fundraising, we continually increased the amount of money raised each year.”

Among her proudest accomplishments as a Reddie are a two-decade high of more than $2.2 million raised during the 2019 fiscal year, despite the headlines, that included a record high of more than 1,000 alumni contributors.

“I think that shows that Henderson alumni believe in and love their alma mater and are willing to support it,” Boyett said. “I was grateful to be a small part of that.”

With the merger into the ASU system, Henderson’s first chancellor should be in place by July 1.

“With all the transition, I felt like this would be a good time to look at other opportunities,” Boyett said.

She said she and her husband had missed Conway and decided to focus their job searches on the area.

“I haven’t actually job-searched since I got out of college, and the way you search for a job now compared to 18 years ago is a little intimidating,” she said.

Through her personal and professional networks, she learned that Maret Cahill Wicks had announced her retirement after seven years as executive director of the United Way of Central Arkansas.

“I thought, ‘That’s the kind of job I think I might like,’” Boyett said. “There were limited opportunities to continue in higher ed, so I wasn’t really looking to stay but at what else might be out there.”

She found out she was the pick shortly after Christmas.

Osmar A. Garcia, board president of the United Way of Central Arkansas, said in a news release that the board is excited to have Boyett lead the organization.

“She has demonstrated the ability to grow and advance organizations through her professional career, and the board is excited to see her impact on the community,” Garcia said.

Boyett said that while most people have heard of the United Way, many don’t know what the organization actually does.

“To break it down simply, we fund agencies — nonprofits in the community that are most often pretty small, so we essentially act as fundraisers for them,” she said. “It takes a rigorous vetting process to be an agency partner, so we want to make sure the dollars we raise are being managed appropriately and being put to great use in the community.

“And we also offer direct services — our own programs that provide services to the community.”

Those four direct services include Charity Tracker, an online tool that tracks assistance to individuals; VITA Free Tax Prep for individuals earning $55,000 or less; a Financial Empowerment Center where volunteers teach free classes on financial literacy; and the Dolly Parton Imagination Library, which provides free books to children every month from birth to age 5. The program serves more than 2,700 children, but 150 more are on a waiting list.

Boyett said there are no income restrictions to qualify for the Imagination Library, but funds must be raised to provide the books.

“We are actively searching for some help right now because we are maxed out,” she said.

She said she was looking forward to working with Aimee Prince, the resource development director who served as interim executive director.

“Aimee has incredible experience,” Boyett said. “She’d worked with the United Way in the past, left for a period of time and come back a year or so ago. She’s a hometown girl, born and raised, and knows everybody.”

As one of her first duties, she’ll be hiring a community-impact director after the recent departure of Carol Allbritton.

“I’m still learning how they like to operate, but I’m excited to just get started and start figuring things out,” Boyett said.