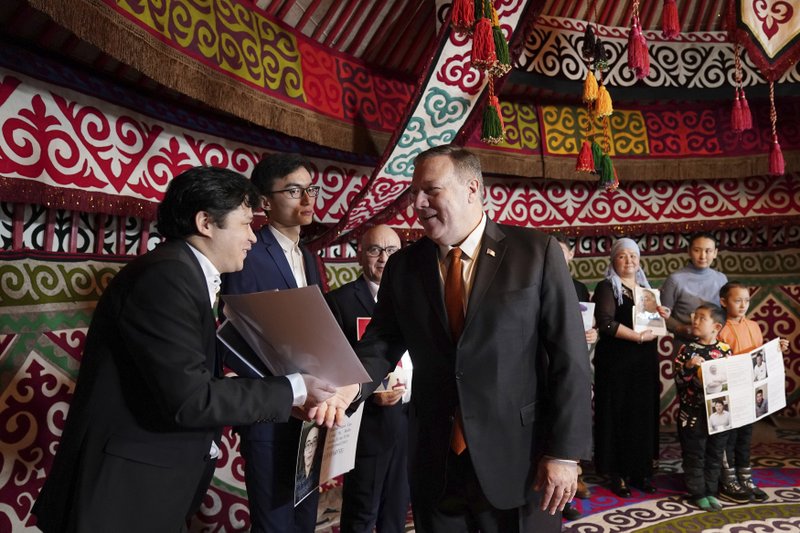 U.S. Secretary of State Mike Pompeo, center, meets with Kazakh citizens who said their family members have been detained in Xinjiang, China, in a yurt at the U.S. Ambassador's residence in Nur-sultan, Kazakhstan, Sunday, Feb. 2, 2020. (Kevin Lamarque/Pool Photo via AP)

TASHKENT, Uzbekistan -- U.S. Secretary of State Mike Pompeo on Sunday pressed Kazakhstan to be wary of Chinese investment and influence, urging the Central Asian nation and others to join calls demanding an end to China's repression of minorities.

Bringing a message similar to the one he has delivered repeatedly to other countries, Pompeo told Kazakh officials that the attractiveness of Chinese investment comes with a cost to sovereignty and may actually hurt the country's long-term development.

"We fully support Kazakhstan's freedom to choose to do business with whichever country it wants, but I am confident that countries get the best outcomes when they partner with American companies," he said. "You get fair deals. You get job creation. You get transparency in contracts. You get companies that care about the environment and you get an unsurpassed commitment to quality work."

Pompeo was expected to make the same case in Uzbekistan, where he arrived late Sunday and went immediately into a meeting with religious leaders to discuss religious freedom. He planned to meet today with Uzbek officials and hold security talks with the foreign ministers of the five Central Asian nations

Pompeo began his brief visit to Kazakhstan by meeting with ethnic Kazakhs whose families have gone missing or been detained in China's widespread crackdown on Muslims and other ethnic and religious minorities in its western Xinjiang region.

"The protection of basic human rights defines the soul of a nation," he said, thanking Kazakhstan for taking in those fleeing persecution. "The United States urges all countries to join us in pressing for immediate end to this repression. We ask simply for them to provide safe refuge and asylum for those seeking to flee China. To protect dignity, just do what's right."

Pompeo also congratulated Kazakhstan on its repatriation of Islamic State fighters from Iraq and Syria. Kazakhstan has taken back nearly 600 fighters and family members detained in areas formerly controlled by the group.

"I have and will continue to commend the Kazakhstani government for its leadership in repatriating foreign terrorists fighters and their families from Iraq and Syria," he said. "I hope this commitment to justice will inspire other nations to do the same."

Kazakhstan has come under some criticism for pressuring an activist who had campaigned for the release of ethnic Kazakhs in China. Threatened with a long prison sentence, the man signed an admission of guilt for inciting ethnic tensions.

Pompeo also urged Kazakh officials to continue reforms that would allow greater U.S. investment and said the two nations were discussing the possibility of opening direct passenger flights between the countries.

At a news conference with Foreign Minister Mukhtar Tleuberdi, Pompeo praised Kazakhstan for its efforts to counter the spread of a new virus from China. He said the United States is helping the country with expertise from the Centers for Disease Control and Prevention and providing laboratory equipment.

Kazakhstan's "quick action to stop the spread of the virus has been incredibly impressive," he said.

Kazakhstan is among the growing list of countries that have suspended travel links with China.