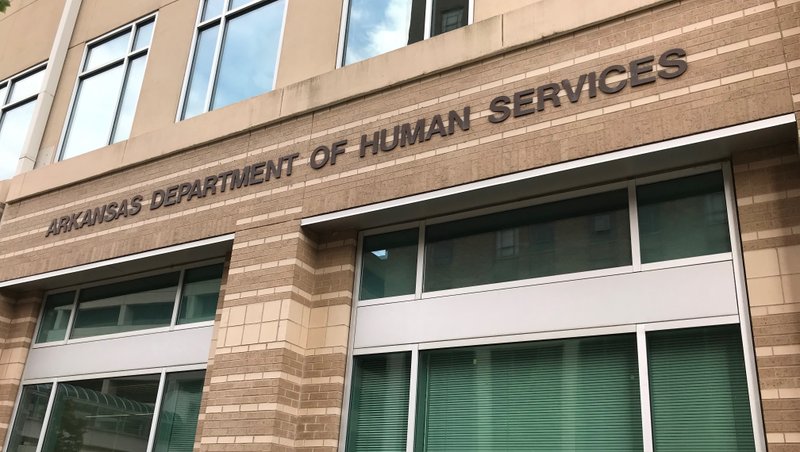 The Arkansas Department of Human Services at Donaghey Plaza in Little Rock is shown in this April 28, 2019 file photo.

An initiative putting managed-care companies in charge of the health coverage of thousands of Arkansans with expensive health needs has come with a side effect for hospitals: a proposed reduction of nearly $31 million in a type of payment they receive from the state Medicaid program.

The Arkansas Hospital Association has objected, prompting state officials to seek guidance from the federal Centers for Medicare and Medicaid Services.

"We've got hospitals taking millions of dollars of reductions in this that will not be sustainable to those hospitals," association chief executive Bo Ryall said. "It will put them in a very difficult position and a financial burden."

The potential reduction is in supplemental payments designed to make up for the low rates the Medicaid program has traditionally paid hospitals.

The state Department of Human Services has proposed the cuts because the federal government doesn't allow states to provide such supplements for payments made by managed-care companies.

Under the proposal, the hospitals would net $192 million this fiscal year, which ends June 30, after paying a tax that helps finance the payments. Without the managed-care adjustment, they would have been due a net $223 million, according to department records.

Because of the number of their patients now enrolled in managed care, private psychiatric hospitals face the biggest reductions. According to state records, their payments would be cut by amounts ranging from 51% to 78%.

Levi Hospital in Hot Springs would face a cut of about $400,000, or 27% of the amount it would have received without the adjustment.

That's almost 5% of the total patient revenue the hospital received in 2018, according to information it submitted in a report to Medicare.

"Levi Hospital has served Arkansans since 1914, and we have faced financial challenges before, but the stroke of the ink pen that led to this 'new' methodology will result in Levi Hospital seriously considering altering its Program and quite possibly its continued service," McCabe wrote.

The supplemental payments, also known as access payments, are mandated under a 2009 state law.

They are designed to tap extra federal funding while filling the gap between the rates paid by Medicaid, which covers primarily low-income people, and Medicare, the federal health insurance program for the elderly and disabled.

To calculate the payment amount, the state determines the amount Medicaid paid hospitals in a given year on a fee-for-service basis, then estimates how much more Medicare would have paid for the same care.

That difference determines the overall size of the payment, which comes from both the state and federal government. The state then assesses a tax on hospitals' net patient revenue in the amount needed for the state's share, which is about 30% of the total, along with an administrative fee that goes to the state.

Federal regulations limit the combined fee-for-service and supplemental payment amounts to the estimate, known as the upper payment limit, of what Medicare would have paid on a fee-for-service basis for the same care.

Then, it removed from its calculations the claims paid on behalf of the 45,000 Medicaid recipients who were enrolled in a managed-care company's plan after the companies began paying for their care on March 1 of last year.

The time it took to revise the calculations caused the first installment of this year's payments to be delayed.

Normally, Ryall said, the payment for the first quarter of the fiscal year that began July 1 would have been in October or November. This time, it wasn't made until last month.

While the department considers the hospital association's objections, it is paying hospitals 80% of the amount they received last year.

Human Services Department spokesman Amy Webb said the supplemental payments were factored into the overall payments, ranging from $1,397.57 to $9,437.59, that the Medicaid program makes to the three companies each month for each recipient enrolled in a company's plan.

When one of the recipients goes to the hospital, the managed-care company, rather than the Medicaid program, is now the one paying the bill.

But Ryall said the rates paid by the companies are privately negotiated and don't necessarily make up for the loss of the supplemental payments to hospitals.

"We're assuming that's being done, but I would say anecdotally that's not always the case," he said.

The other two companies, Summit Community Care and Arkansas Total Care, didn't respond to inquiries from the Arkansas Democrat-Gazette about their rates.

In a phone interview, Levi Hospital's McCabe said he doesn't have a problem with what the companies are paying.

"We're fine with being reimbursed by either party, but there can't be this third category," in which the hospital doesn't receive a supplemental payment for care it provides for traditional Medicaid recipients, he said.

Brad Bloemer, chief financial officer of Arkansas Methodist Medical Center in Paragould, said the managed-care companies pay his hospital more than Medicaid, but not enough to make up for the loss of the supplemental payments.

The Human Services Department's proposed adjustment would reduce the net amount his hospital receives through the payments by more than $266,000, to about $4.3 million.

"We're a pretty small facility, so that has a significant impact," Bloemer said.

Ryall said hospitals were caught by surprise when state officials first told them in December about the planned reduction.

In a Jan. 10 letter to Human Services Secretary Cindy Gillespie, Ryall said the payment reduction is unnecessary and violates a state Medicaid policy that spells out how the supplemental payments should be calculated.

Actual enrollment in the managed-care plans will eventually be reflected in the claims used to calculate the payment amount, he noted. In the meantime, he said, the Human Services Department should continue calculating the supplemental payments as it has in the past.

"They need to use actual data," he said.