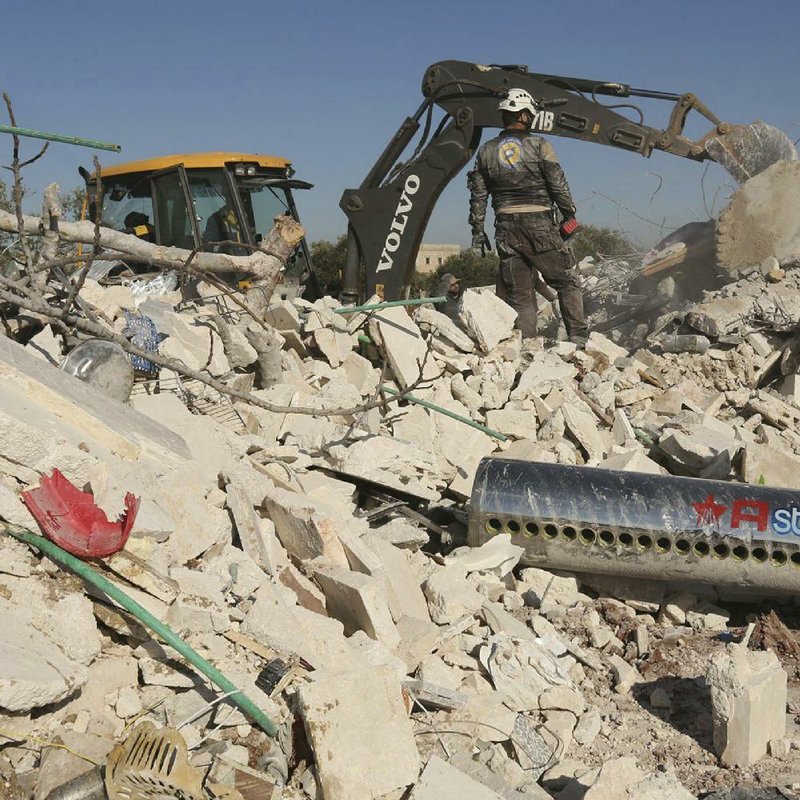 Rescuers in Sarmin, Syria, search for victims in the rubble of a house after government airstrikes hit the rebel-held village Sunday, killing at least seven people. Elsewhere in northwest Syria, a Turkish military convoy entered rebel-held areas to monitor them after a cease-fire collapsed. More photos at arkansasonline.com/23syria/.

BEIRUT -- A large Turkish military convoy rumbled into rebel-held areas of northwest Syria on Sunday, witnesses on the ground and activists said.

The violence and troop movements came amid a Syrian government offensive into the country's last rebel stronghold, located in Idlib province and parts of the nearby Aleppo region. Turkish troops are deployed in some of those rebel-held areas to monitor a cease-fire that has since collapsed.

Relations between Turkey and Syria have deteriorated sharply since Syria's civil war began in 2011. Syria accuses Turkey of undermining its security by allowing thousands of foreign fighters to come battle the Syrian army. Idlib province is currently dominated by al-Qaida-linked militants.

[Video not showing up above? Click here to view » https://www.youtube.com/watch?v=Ulc3mrt0290]

The Turkish military convoy consisted of dozens of armored vehicles, fuel tanker trucks and flatbed trucks carrying tanks and armored personnel carriers. Associated Press video from northern Syria showed Turkish troops had remained in their vehicles and none were seen on the road as civilian cars drove past and residents stood by watching.

The Syrian Observatory for Human Rights, an opposition war monitor, put the number of Turkish vehicles at about 195.

With Russian backing, the Syria government has been on the offensive since December to capture and reopen a strategic highway held by the rebels since 2012. That's despite a cease-fire deal brokered late last year between Russia and Turkey.

Government forces captured the key town of Maaret al-Numan from the rebels Wednesday and have now set their sights on the town of Sarqeb. The strategic highway passes through both.

An airstrike killed seven people Sunday in the village of Sarmin, west of Sarqeb, according to the Observatory and the Idlib News Network, an activist collective.

Syrian state TV said rebels shelled western parts of the northern city of Aleppo, killing one woman and wounding others. It added that insurgents fired an anti-tank missile at journalists working in the area, wounding several.

State TV said the wounded included a reporter for the pro-government Sama TV, as well as two others for Iran-owned Alam TV and Kawthar TV. One of their drivers was wounded as well.

Idlib province is home to some 3 million people, many of them displaced from other parts of Syria in earlier bouts of violence. The United Nations has estimated that 390,000 Syrians have been displaced there over the past two months -- 315,000 in December and 75,000 in January.

Turkey already hosts 3.5 million Syrian refugees, and the current wave of violence in Idlib has raised concerns of a new surge in displaced civilians fleeing toward the Turkish border.