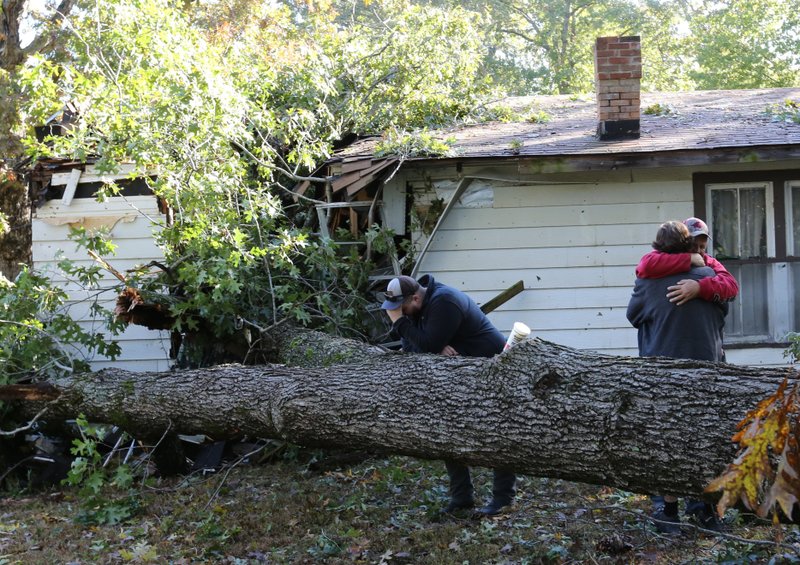 Relatives grieve Monday after a man was killed when a tree fell on his Benton County home during a heavy storm on Oct. 21, 2019. Meteorologists received reports that multiple tornadoes might have touched down as the storm system crossed the state. More photos are available at arkansasonline.com/1022storm/

BENTONVILLE — Benton County will appeal a Federal Emergency Management Agency decision not to help pay the cost to clean up tornado damage from late October, a county official said Monday.

The county has 30 days to appeal. County officials are in the process of gathering information to provide to the Arkansas Department of Emergency Management. That agency will then write a letter of support and send all documentation to the FEMA Region 6 office in Texas, McGowen said.

The letter didn’t specify why the county was denied, but state Emergency Management officials said it was because the county didn’t meet the threshold for assistance, McGowen said. McGowen was told the county was short of the $4,461,355 threshold by $124,134.

“For some reason, FEMA did not accept the preliminary damage assessment numbers we provided them and reduced the amounts that were submitted by the entities,” McGowen said Monday. “We are gathering the information needed to complete the appeal and show that we not only met, but exceeded, the threshold.”

If the county does not win the appeal, each entity will be responsible for the cost incurred from the tornado, he said. FEMA would pay 75% of the costs if the appeal is granted. There is no timetable for when the county will hear back about its appeal.

The tornadoes in the early morning hours of Oct. 21 produced wind exceeding 100 mph, according to Pete Snyder, a meteorologist with the National Weather Service in Tulsa.

The first tornado began in Adair County in northeast Oklahoma and tracked about 9.1 miles to the Siloam Springs area, Snyder said. That tornado recorded wind between 90 and 100 mph.

The second tornado started in the Siloam Springs area and traveled about 31 miles across Benton County to the area southeast of Avoca, he said. That storm produced 100-110 mph wind.

The storms claimed the life of one man. County Coroner Daniel Oxford said Leonard Pollock, 66, died when a tree fell on his home on Pleasant Ridge Road, east of Rogers.