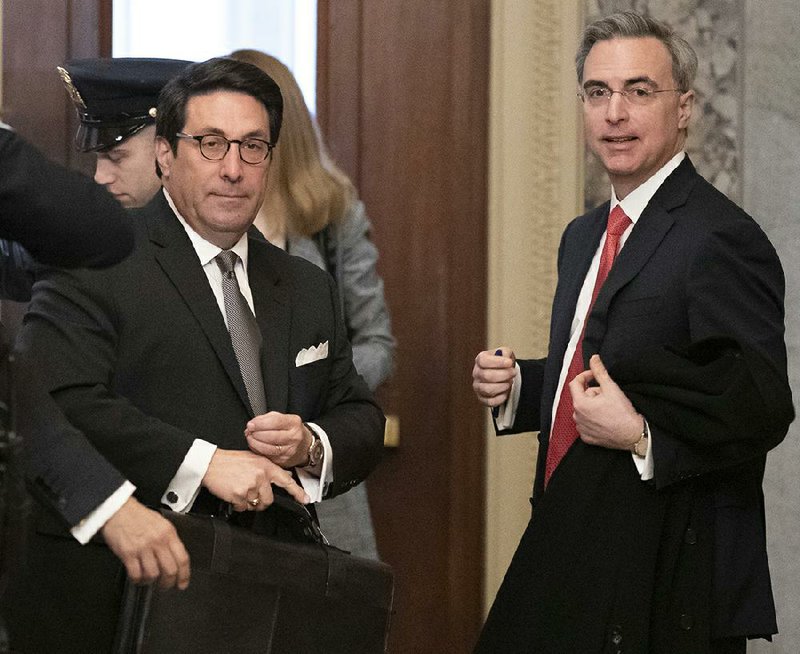 WASHINGTON -- House Democratic prosecutors and President Donald Trump's defense team made their closing arguments Monday in the president's impeachment trial, with each side hoping to influence public opinion and the historical record.

Prosecutors drew on the Founding Fathers to argue to senators -- and Americans -- that Trump's actions are not isolated, but rather show a pattern of behavior targeting this year's presidential election.

"If you believe, as we do and as we have proven, that the president's efforts to use his official powers to cheat in the 2020 election jeopardize our national security and are antithetical to our democratic tradition, then you must come to no other conclusion than that the president threatens the fairness of the next election," said Rep. Jason Crow, D-Colo., who began the closing arguments on behalf of the House impeachment managers.

Rep. Adam Schiff, D-Calif., implored senators to prevent a "runaway presidency," telling Republicans that even a single vote for conviction from one of them would make an important statement.

"For a man like Donald J. Trump, [the Founding Fathers] gave you a remedy and meant for you to use it. They gave you an oath, and they meant for you to observe it," Schiff said. "We have proven Donald Trump guilty. Now do impartial justice and convict him."

He said that anyone who doesn't vote to convict will see Trump's name "tied to his with a cord of steel for all of history."

"A man without character or ethical compass will never find his way," Schiff said. "You are decent. He is not who you are."

The defense team countered that Democrats have been out to impeach Trump since the start of his presidency, saying they were the ones targeting the 2020 election by attempting to undo the people's 2016 decision.

"Leave it to the voters to choose," said White House counsel Pat Cipollone, calling for an end to the partisan "era of impeachment."

[Video not showing up above? Click here to watch » https://www.youtube.com/watch?v=3HIxiM_78oM]

Kenneth Starr, the former prosecutor whose investigation in the 1990s led to then-President Bill Clinton's impeachment, complained about the inadequacy of the House prosecutors' "fast-track" case.

"The question fairly to be asked: 'Will I cast my vote to convict and remove the president of the United States when not a single member of the president's party, the party of Lincoln, was persuaded at any time in the process?'" Starr asked.

Trump attorney Jay Sekulow showed clips of Democrats calling for impeachment to argue this was the "first totally partisan presidential impeachment in our nation's history, and it should be our last."

One of Trump's lawyers, Alan Dershowitz, did not appear.

After closing arguments, senators began giving speeches on the Senate floor to explain their vote, a process that is scheduled to continue until Wednesday afternoon.

The Senate is widely expected to acquit Trump this week, thereby closing the third presidential impeachment trial in the nation's history.

Many senators acknowledge the House Democratic managers have essentially proved their case. Trump was impeached in December on two charges: that he abused his power when he pushed Ukraine to investigate rival Democrats, and that he then obstructed Congress by instructing aides to defy House subpoenas.

But key Republicans have said the president's actions toward Ukraine do not rise to the level of offense that warrants conviction and removal from office.

Republican Sens. Lamar Alexander of Tennessee, Marco Rubio of Florida and Rob Portman of Ohio are among those who said Trump's actions were inappropriate, but they said they would not vote to hear more testimony or to convict him.

Sen. Lisa Murkowski, R-Alaska, called the president's actions "shameful and wrong," but in a speech late Monday she also derided the partisan process leading to this week's vote.

"The response to the president's behavior is not to disenfranchise nearly 63 million Americans and remove him from the ballot," she said. "The House could have pursued censure and not immediately jumped to the remedy of last resort. I cannot vote to convict. The Constitution provides for impeachment but does not demand it in all instances."

Sen. Joe Manchin, D-W.Va., a moderate who is friendly with the White House, on Monday asked his colleagues to consider censuring Trump.

"I do believe a bipartisan majority of this body would vote to censure President Trump for his action in this matter. Censure would allow this body to unite across party lines," Manchin said in a speech on the Senate floor. "His behavior cannot go unchecked by the Senate, and censure would allow a bipartisan statement condemning his unacceptable behavior in the strongest terms."

While censure is not as strong as removal from office, Manchin argued that he was being realistic. "I see no path to the 67 votes required to impeach President Trump, and haven't since this trial started," he said.

It is not yet clear how Manchin will vote on the two articles of impeachment and on ousting Trump. The president won more than 68% of the vote in West Virginia in 2016.

Manchin has prepared a censure resolution for fellow senators to review in the coming days. He said in an interview later Monday that he is unsure whether Republican senators such as Mitt Romney of Utah and Susan Collins of Maine will sign on to his legislation, which remains in draft form.

"I don't know. I really don't know. I've been talking to people for a while," Manchin said, noting that he is open to discussing the final language of his resolution with colleagues.

When asked if he believes he will pay a political price with Trump, Manchin said he will wait and see.

"I've had a good personal relationship, one on one, with him. But this is wrong, and he's not getting good input from his people," Manchin said of the president's conduct.

He said his fellow Democrats, including Senate Minority Leader Charles Schumer, D-N.Y., have been "respectful" as he has moved toward his censure position.

Other Democrats said they were unsold on censure, calling it a punishment well short of what Trump deserves.

"What he did was an impeachable offense -- I think it's absolutely obvious -- and giving a slap on the wrist doesn't do any good," said Sen. Jon Tester, D-Mont.

Sen. Brian Schatz, D-Hawaii, suggested that a censure would only allow Republicans to skirt responsibility for protecting Trump, saying, "I'm not bailing them out."

Sen. Doug Jones, D-Ala., was undecided on either censure or removal from office.

"I'm getting there. I'm going through all of my notes. I'm going through everything," said Jones, who represents a state where Trump won more than 60% of the vote in 2016. "I really do want to hear arguments and conversations from colleagues."

Rubio said Monday that he prefers to "just move forward."

"We have an election in nine months, and that's, in my mind, the appropriate way for people to take into account how they feel about what they think the president did or didn't do," he said. "It's the ultimate accountability." 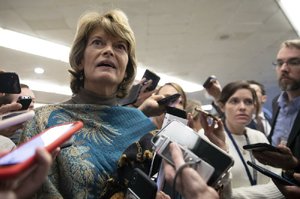 Photo by AP/Jacquelyn Martin
“I cannot vote to convict,” Republican Sen. Lisa Murkowski said Monday. “The Constitution provides for impeachment but does not demand it in all instances.” 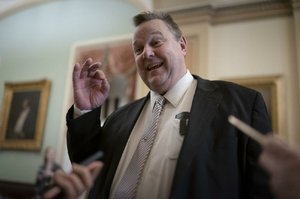 Photo by AP/J. Scott Applewhite
“What [President Donald Trump] did was an impeachable offense — I think it’s absolutely obvious — and giving a slap on the wrist doesn’t do any good,” Democratic Sen. Jon Tester said Monday.