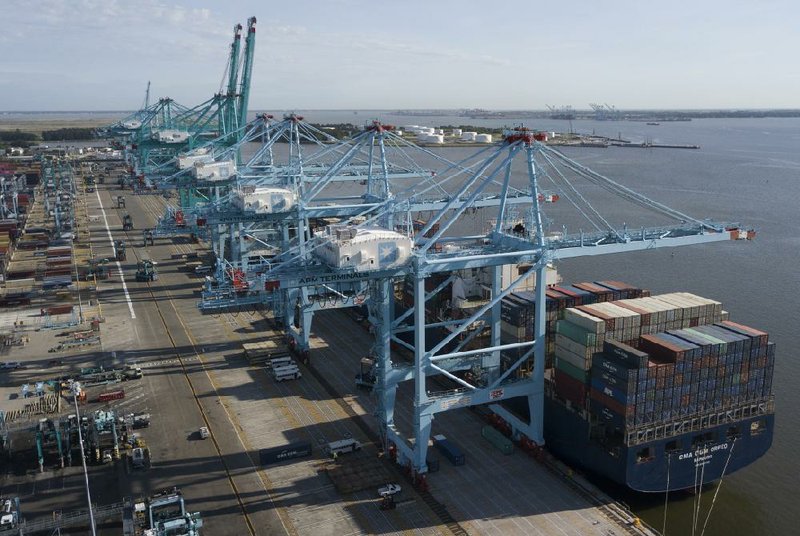 A container ship is unloaded at the Port of Virginia in Norfolk.

The Institute for Supply Management, an association of purchasing managers, said Monday that its manufacturing index rose to 50.9 in January from 47.8 in December. Anything above 50 signals expansion.

The index had showed U.S. manufacturing contracting from August through December. Economists had expected another bad month in January.

Depressed by weak export markets, a trade war, cutbacks in business investment and elevated inventories relative to sales, the sector has struggled to gain traction. As a result, the services sector has fueled the economic expansion. Sustained manufacturing growth would indicate a partial trade deal with China is providing impetus for further expansion.

But new orders, production and export orders all grew last month. Factory hiring dropped for the sixth straight month but at a slower pace than it did in December. Factories, the institute said, were struggling to find workers at a time when the unemployment rate is at a 50-year low of 3.5%.

The new-orders index jumped to an eight-month high of 52 and the production gauge surged 9.5 points, also the largest gain in more than six years.

While factories last year added the fewest jobs since 2016, the Labor Department's monthly employment report Friday will offer information about hiring at the start of 2020.

An index of prices paid showed input costs increased as the gauge of supplier deliveries held above 50, suggesting shipments are slowing.

And the outbreak of a new virus in China threatens the supply chains that manufacturers rely on. "The coronavirus is a negative that has got me concerned," said Timothy Fiore, chairman of the institute's manufacturing survey committee.

"The reading likely reflects the positive impact of the phase-one trade deal between the U.S. and China," Bloomberg analyst Eliza Winger wrote in a note. "However, we are expecting the uptick to be temporary as the Boeing production halt and recent uncertainties in response to the coronavirus outbreak may stress global supply chains."

The U.S. and China last month reached a truce in their battle over Beijing's aggressive economic policies. But the United States continues to levy tariffs on $360 billion worth of Chinese imports.

Another report Monday showed companies are cutting back on capital expenditures.

Spending on U.S. construction projects edged down a slight 0.2% in December, closing out a year when total construction registered its first annual decline in eight years.

The Commerce Department said the decline was the first monthly drop since a 0.9% fall in June. For the year, construction spending fell 0.3%, the first setback since a 2.6% decrease in 2011.

The fall-off reflects weakness in nonresidential construction, which fell 1.8%, the sharpest drop since April. Spending for most major categories from office building to shopping centers declined.

Home building rose a solid 1.4%. This category continues to benefit from falling mortgage rates and a strong labor market.

Spending by the federal government on construction projects rose a sharp 2.1% in December to the highest level in seven years, but this was offset by a 0.6% drop in the larger state and local government category.

It was the first annual setback since a period of five straight yearly declines from 2007 through 2011 as the construction industry was battered by a deep recession that had been triggered by the bursting of a housing boom in the middle of the last decade.

For last year, home building was down 4.7% while nonresidential construction was basically flat and public construction posted a 7.1% increase.

Economists believe home building will show further gains this year, helped by the Federal Reserve's decision to cut interest rates three times last year in an effort to protect the U.S. economy from a global slowdown and the adverse effects of the U.S.-China trade war.

The 1.4% gain in residential construction in December reflected a 2.7% jump in construction of single-family homes that offset a 1.8% drop in the smaller and more volatile apartment sector.

Information for this article was contributed by Paul Wiseman and Martin Crutsinger of The Associated Press and by Reade Pickert of Bloomberg News. 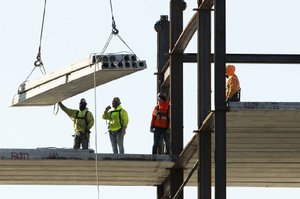 Photo by AP/Matt Rourke
Spending on nonresidential construction such as factories, hotels and office buildings slumped 1.8% in December from a month earlier, its biggest drop since April.