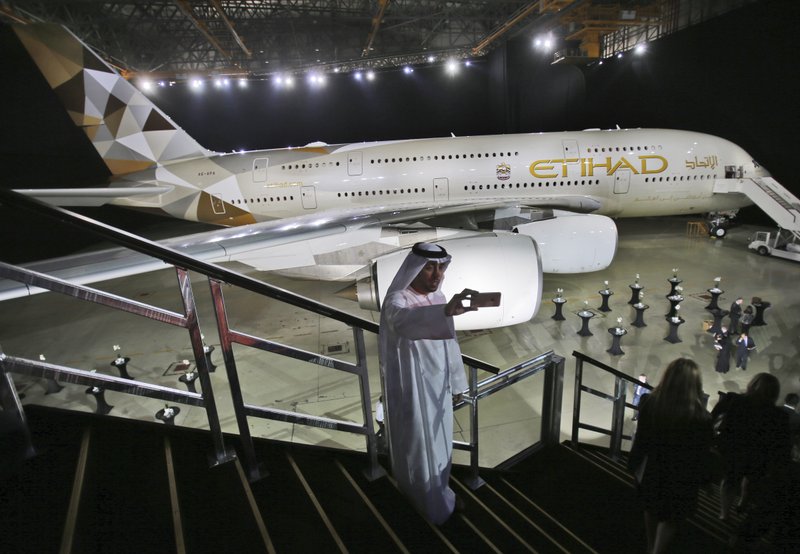 FILE- In this Thursday, Dec. 18, 2014 file photo, an Emirati man takes a selfie in front of a new Etihad Airways A380 in Abu Dhabi, United Arab Emirates. Abu Dhabi's long-troubled Etihad Airways said Tuesday, Feb. 4 2020, it would sell 38 aircraft to an investment firm and a leasing company in a deal valued at $1 billion, the latest cost-cutting measure by the United Arab Emirates' national carrier. (AP Photo/Kamran Jebreili, File)

DUBAI, United Arab Emirates -- Abu Dhabi's long-troubled Etihad Airways said Tuesday that it would sell 38 aircraft to an investment firm and a leasing company in a deal valued at $1 billion, the latest cost-cutting measure by the United Arab Emirates' national carrier.

Etihad said that it would sell 38 aircraft -- 22 Airbus A330s and 16 Boeing 777-300ERs -- in the deal with investment firm KKR and leasing firm Altavair AirFinance. KKR said the Boeing 777-300ERs will "be leased back to Etihad upon purchase in early 2020," while the Airbus A330s will go to international clients.

Etihad described the move as being in line with "the third year of its transformation program."

"The deal offers us flexibility while ensuring we stand by our sustainability targets and maintain a fleet of the most fuel-efficient, technologically advanced aircraft," the airline said in a statement.

Etihad's website lists itself as having a fleet of 102 aircraft. It no longer lists its A330s among its fleet, having said it would begin phasing those aircraft out. The 16 Boeing 777s it will sell and lease back represent 15% of its current fleet.

Since 2016, Etihad has lost $4.75 billion as its strategy of aggressively buying stakes in airlines from Europe to Australia to compete against Emirates and fellow rival Qatar Airways exposed the company to major losses.

In the time since 2016, it has embarked on a cost-cutting initiative and recently announced that it would restructure planned aircraft purchases from Airbus and Boeing.

Previously, Etihad reported losses of $1.52 billion for 2017 and $1.95 billion in 2016. It blamed "challenging market conditions and effects of an increase in fuel prices" in part for the loss in 2018.

Abu Dhabi's rulers started Etihad in 2003, competing with the established Dubai government-owned carrier Emirates that flies out of Dubai International Airport only 70 miles away. In 2018, Etihad began lending pilots to Emirates under a new program.

Both Emirates and Etihad have seen business hurt by President Donald Trump's travel bans affecting Muslim-majority nations. That's even with Abu Dhabi International Airport having a U.S. Customs and Border Protection preclearance facility, allowing passengers arriving in the U.S. to bypass inspection after landing. It's the only such facility in the Mideast.

The two airlines are government-owned carriers in the United Arab Emirates, a federation of seven sheikhdoms on the Arabian Peninsula. Both compete in the long-haul carrier market, using their nation's location between East and West to their advantage.

Both airlines continued to fly to China during the ongoing outbreak of the new coronavirus, even as other Western and Arab airlines stopped. On Monday, United Arab Emirates civil aviation authorities halted all flights to China, except for those going to Beijing.