UALR too much for record showing 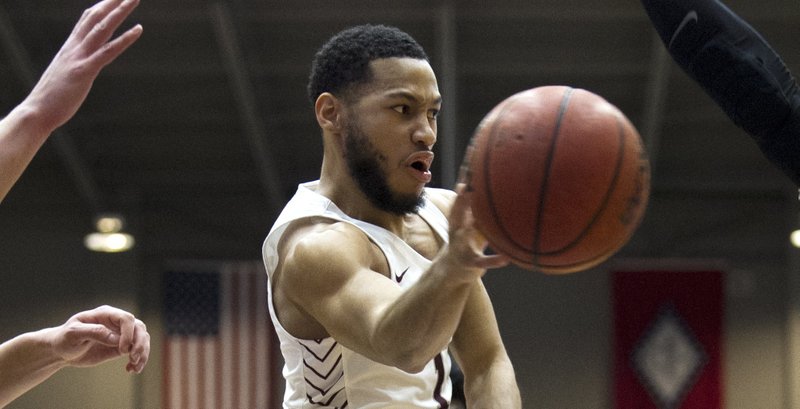 Little Rock Guard Marquis Nowell passes to a teammate from under the basket during the Little Rock vs. Appalachian State Basketball game on Saturday, Feb. 1, 2020. (Arkansas Democrat-Gazette / Stephen Swofford)

Coaches preach about the deception of box scores. Few will ever be as deceiving as the one from Saturday afternoon at the Jack Stephens Center in Little Rock.

The red-hot University of Arkansas at Little Rock men's basketball team claimed its sixth consecutive victory with a 93-86 win over visiting Appalachian State.

This was in spite of the Mountaineers (12-11, 6-6 Sun Belt Conference) turning in what was statistically one of the top offensive performances by an opposing team in Stephens Center history.

"I've never seen anything like [that]," UALR Coach Darrell Walker said Tuesday. "In all my basketball life, I don't think I've ever seen a team shoot 70-something percent and lose.

"But we shot a high percentage, too, so that way they could never get away from us."

"When I saw we turned the ball over 11 times, I said, 'OK, I see why we scored a bunch of points besides shooting the ball well that game,' " Walker said. "We turned it over five or six times less than we usually do."

The day was highlighted by sophomore point guard Markquis Nowell's first career double-double. He tallied 17 points, a career-high 13 assists and 4 steals. Nowell was tabbed Monday as a Sun Belt player of the week for the third time this season, a program record.

Walker's been steadfast in declaring that winning for the Trojans must start on the defensive end, but even he wasn't irked by Saturday's outing, conceding that Appalachian State hit plenty of tough shots.

"I knew watching the game that a lot of the shots that they took and made, that they were tightly contested," Walker said. "And when I watched the film, it just proved that I was right on that."

Even on days like Saturday when the opponent shoots over 70% from the floor and over 60% from three, UALR has proven it can still find a way to win. But Walker knows his team is beatable.

"We can be beat just like anybody else," Walker said. "Troy proved that. This league, you better not get ahead of yourself."

The difference is that with UALR's aforementioned 76-71 defeat at Troy on Jan. 9, as well as its 52-43 home loss against South Alabama two days later -- the team's only two losses in Sun Belt play this season -- the Trojans didn't have Nowell, who had suffered a hamstring injury during a home victory over Georgia Southern on Jan. 6.

UALR's 11-2 Sun Belt mark is tied for the program's best conference start. Former coach Chris Beard's club was 11-2 before finishing 17-3 in his lone season in 2015-16. That team went on to claim the Sun Belt's regular-season and tournament titles, appeared in the second round of the NCAA Tournament and finished 30-5.

The Trojans have a 2 1/2-game cushion over second-place Georgia State (15-8, 8-4) in the Sun Belt standings. Those two squads have yet to meet this season and won't face each other until the regular-season finale on March 3 in Atlanta.

Arkansas State University (15-9, 7-6) is UALR's next test, when the two in-state rivals meet Saturday in Little Rock at 2 p.m.

Despite the turnaround season, it still boils down to winning the Sun Belt tournament if the Trojans want to reach the NCAA Tournament for just the sixth time in program history.

The top two teams in the league standings secure an automatic berth into the Sun Belt semifinals, which are slated for March 14 at the Smoothie King Center in New Orleans. The championship game follows the next day.

"Once you get to New Orleans, it's anybody's game," Walker said. "The goal is to get there, and once you get there, I think you can lock in and go from there."

Print Headline: UALR too much for record showing