RESTAURANT REVIEW: Checking out The Library

New spot downtown a nice place to hang out, although books are absent and the kitchen is a work in progress by Eric E. Harrison | February 6, 2020 at 1:44 a.m. 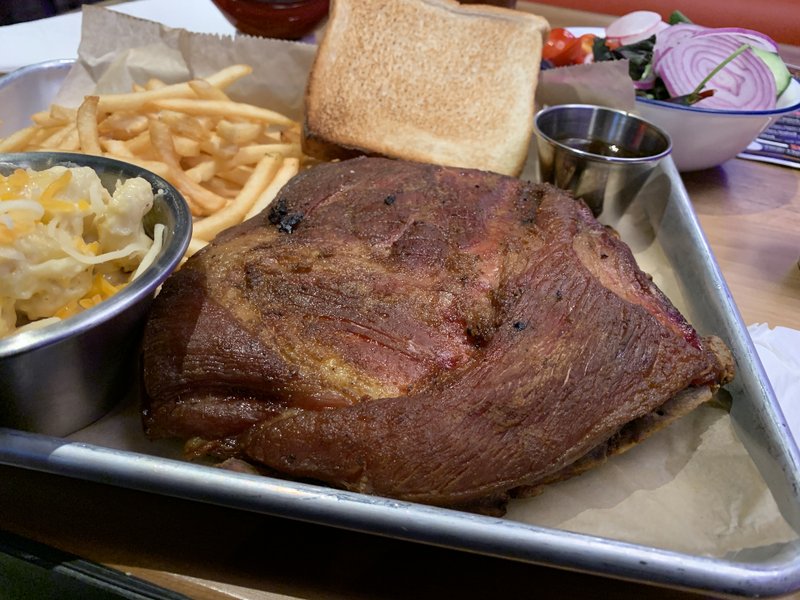 The end of a slab of ribs, a half rack, provides extra meat for one of The Library Kitchen + Lounge's three Meat and Three options, with sides of (clockwise from left) mac and cheese, shoestring fries and a side salad. (Arkansas Democrat-Gazette/Eric E. Harrison)

Intrepid Companion reports that there is some element of bookish decor in the women's restroom at The Library Kitchen + Lounge, which opened about a month ago in the former Gusano's space in Little Rock's River Market District.

If that is so, and we are not confirming of our own knowledge that it is, that is the only even remotely bookish thing about the establishment, which could pass for a sports bar.

Certainly, there is absolutely zero chance that anybody walking in off the street would mistake this in any way for the Central Arkansas Library System's Main Library, which occupies the entire next block to the south. Perhaps the proximity explains the name.

Certainly, given the dozen-plus big-screen TVs showing almost exclusively sports programming (on our first visit, all of them were tuned to a Razorbacks basketball game), and given the place's neon-lit, orange-vinyl vibe, we're having a hard time imagining any place where an actual book would look more out of place.

The "lounge" part is fine. You might want to drop by The Library for a beer or a cocktail, to watch a sporting event or hang out with friends. But the kitchen needs more time.

After two visits in which an appetizer and the side dishes were, perforce, the main attraction, we'd say there is definitely room for improvement, which can be expected at a new establishment. That includes plate presentation, an area where the kitchen falls short.

There's still a certain new-place sterility about the big main area. The footprint is not that much different from Gusano's — the bar, of much the same monstrous size, though now rectangular rather than square, occupies the entire center of the room. Four big contiguous TVs beam down on each side. There are two more TVs at each end of the room and one really big one within hailing distance of the front entrance.

Raised orange-vinyl, U-shaped booths line both sides. Wire caging frames the fresh-scrubbed brick walls. Up in front, near the garage-style doors that can no doubt be raised in fair weather, are raised aluminum tables; in the back are low, large-party tables.

Restaurateur Rob Byford has kept some promises about his menu, mostly involving the Delta influence, playing off his Memphis and Arkansas roots. There are barbecue sandwiches and ribs; some Southern-style items, including a fried pork-chop sandwich ($12.99) and an appetizer list that includes pork rinds, fried pickles and pimento hush puppies. Something we were looking forward to but are missing in action: pasta selections with Byford's family's "award-winning Sunday Italian Gravy." Perhaps those will show up in time.

The Library does do a really good job with the thin-sliced fried pickles in a thin, crunchy batter ($6.99), a plentiful portion of which comes in a paper basket with a side of innocuous ranch dressing that complemented the pickles mostly by staying out of their way.

It was a better choice than either of the two other appetizers we tried. The menu describes the Chips and Dip ($7.99) as "white queso dip topped with smoked chicken and fresh pico salsa." The chips, just out of the fryer and glistening with oil (yet not as crisp as we think they should have been), came loose on a butcher-paper-lined aluminum tray-plate. We enjoyed the chunky, non-fluid salsa, but the queso a) wasn't white — it was very Rotel-like with a slightly flour-y consistency, and b) the volume of smoked chicken, which was otherwise pleasant, overwhelmed the small quantity of dip below.

We enjoyed the flavor of our Library Burger ($11.99), a well-done half-pound patty, but the pimento cheese and caramelized onions topping it under the several slices of flabby bacon made it slightly sloppy. The Smash Burger ($10.99), topped only with white Cheddar, appears to be somewhat less complicated.

We tried two of the three versions of the Meat and Three package ($13.50), and though the portion sizes were more than adequate, the meat part needs improving.

The one-half smoked chicken was slightly dry and the skin, which had puffed up in the cooking, had collapsed into unappetizing wrinkles.

And our half-rack of spare ribs turned out to be the end of the slab of ribs, so to begin with, it looked odd, and while altogether we probably got more meat that way (enough, in fact, that we ended up taking an appreciable portion of it home), it was harder to access — trying to just pull the ribs apart led to rib bones parting from the slightly tough meat (not like it was falling tenderly off the bone), so we were still required to aggressively attack it with a knife and fork.

All Meat and Three items (the third is a portion of pulled barbecue pork; a pulled pork sandwich is $10.99) come with three sides, and portions of slightly tangy house barbecue sauce and the house Alabama white sauce, infused with mustard and citrus overtones, that also doubles as one of the six house salad dressings.

It takes quite a bit to turn us off deviled eggs ($7.99), but we weren't wild about two of the three offerings. The menu offers three varieties: "Southern Traditional," with green onions; "Smoked," whipped and topped with a smoky paprika; and "Library Style," blended with oregano and parsley. You can order a half dozen of any variety or a flight — two of each. Only the "Smoked" eggs had much appeal. The "Southern Traditional" was blah, and the "Library Style" was dry. They were piled onto a bed of mixed greens so deep it almost hid them from sight.

We did like many of our side items. The Scratch Mac & Cheese was really good, the macaroni firm and the second portion came topped with shredded white and yellow cheese that improved its presentation and added an additional cheesy dimension. The Delta white beans were firm and had a nice piquant kick. The shoestring fries were firm on the outside and soft on the inside and actually tasted like potatoes, which you don't get that often nowadays.

Other sides ($3 a la carte) were not so exciting: The maque choux tasted as though the corn and green pepper components came out of a can. The side salad, though obviously put together in the kitchen, was so overwhelmingly and over-generously topped with half-sliced grape tomatoes, thin-sliced radishes and cucumbers and a whole wide slice of purple onion that we had a hard time getting to the relatively tiny layer of mixed greens at the bottom. The mayonnaise-y blue cheese dressing was lacking in even tiny blue cheese chunks or much blue cheese flavor.

Our server, the same one for both our visits, couldn't have been friendlier or more helpful. Management ranges the floor making sure guests are enjoying their meal and/or experience.

Print Headline: Checking out The Library