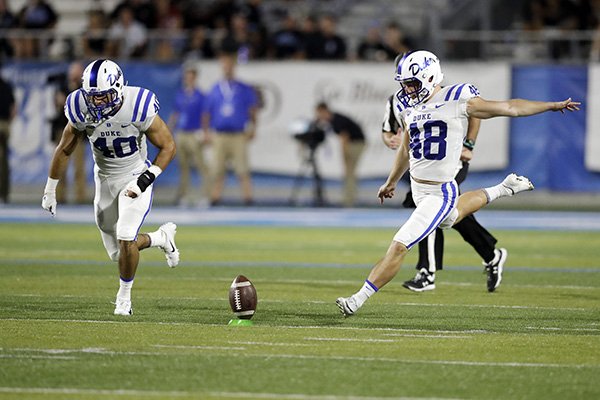 Duke place kicker AJ Reed (48) kicks off to Middle Tennessee in the first half of an NCAA college football game Saturday, Sept. 14, 2019, in Murfreesboro, Tenn. At left is Jacob Morgenstern (40). (AP Photo/Mark Humphrey)

Duke grad transfer kicker AJ Reed announced plans to transfer to the University of Arkansas on Thursday. He will be on scholarship and have immediate eligibility with one year to play.

He played in the Offense-Defense All-American Bowl and kicked a 32-yard game-winning field goal as time expired for the American team.

Reed becomes Arkansas’ fourth grad transfer. Quarterback Feleipe Franks and cornerback Jerry Jacobs are enrolled while linebacker Levi Draper will report to Fayetteville after graduating from Oklahoma in May.

The Razorbacks recently hosted Clemson defensive tackle grad transfer Xavier Kelly for an official visit and are awaiting word on his decision.