MUSIC: One hit no more: Persistence pays off for Billy Ray Cyrus 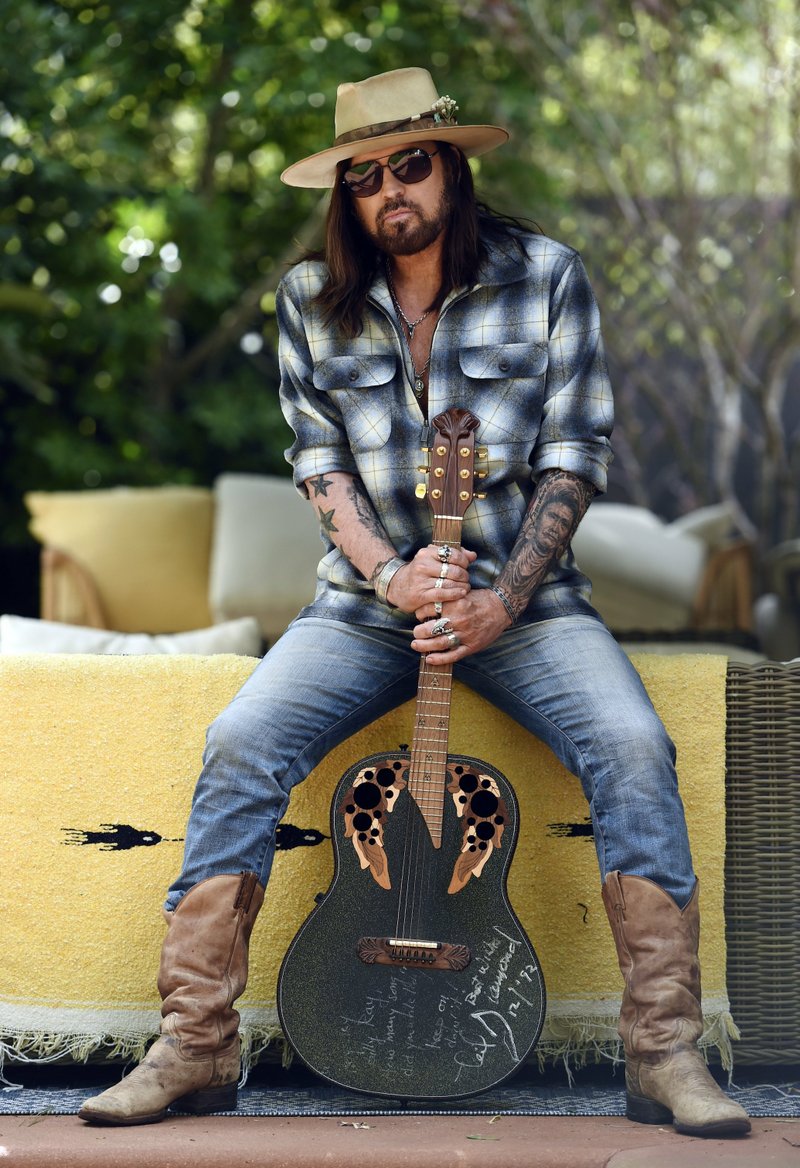 Singer-songwriter Billy Ray Cyrus poses for a portrait with an Ovation guitar presented to him by Neil Diamond in 1992, at his home in Los Angeles on Jan. 30. The Kentucky-born singer won his first Grammy this year for his collaboration with rapper Lil Nas X on "Old Town Road." His new three-song EP, The Singin' Hills Sessions Vol. 1 Sunset, was released Jan. 31. (The Associated Press/Chris Pizzello)

NASHVILLE, Tenn. — Most people would say that Billy Ray Cyrus has been lucky to keep finding himself in the middle of massive pop culture moments over this three-decade long career in music and television.

Between his auspicious 1992 debut with "Achy Breaky Heart," to starring alongside his daughter Miley in the hit Disney show, Hannah Montana, to finally taking home his first Grammy trophies for an equally goofy and controversial hit "Old Town Road," lightning keeps striking for the Flatwoods, Ky., singer and actor. But to the 58-year-old, it's more than luck

"To me, it was a celebration of persistence, a celebration of not giving up," Cyrus said from his home in Los Angeles, just days after sharing Grammy Awards for best music video and best pop duo/group performance with Atlanta rapper Lil Nas X.

While "Old Town Road" hasn't exactly resulted in a massive resurgence for Cyrus or his own country songs, it has reinvigorated him personally. He released a three-song EP, The Singin' Hills Sessions Vol. 1 Sunset, and is starring alongside Lil Nas X and Sam Elliott in a Super Bowl commercial for Doritos. His awards will be on display at the Country Music Hall of Fame and Museum starting in March.

He broke out in the early '90s sporting a long brown mullet, torn T-shirts that showed off his muscled arms and basketball sneakers instead of cowboy boots.

Don Von Tress, the songwriter behind "Achy Breaky Heart," didn't meet him until after Cyrus had decided to record the song for his debut album Some Gave All, which would go on to be certified platinum nine times by the Recording Industry Association of America. In the music video, Cyrus swaggers and dances around stage like Elvis, while fans line dance in the crowd.

"Who'd seen or heard anything quite like that at the time?" Tress said. "The chemistry between he and the song were just undeniable."

In what would be a recurrent theme in his life, Cyrus had to deal with the blowback from the immediate worldwide success of "Achy Breaky Heart."

"I was persecuted, because back then country claimed me and then got mad when pop stations started playing it," he said.

Like many viral sensations that become omnipresent, the song was panned by artists and critics alike, but fans loved it. Weird Al Yankovic made a parody of it that asked stations to please stop playing it. Cyrus was nominated for three Grammys, including record of the year, in 1992. He lost, unsurprisingly, to Eric Clapton's "Tears in Heaven," for record of the year.

But "Old Town Road," which combined Lil Nas X rapping about "bull riding and boobies," with a Nine Inch Nails sample and a trap beat, had much longer legs, due to viral memes and the social media platform Tik Tok. It would go on to break the record for most weeks atop the Billboard Hot 100 chart.

Cyrus would relive the experience of being shunned again when Billboard decided that Lil Nas X's song wasn't country enough be included on its country chart.

"A hit is a hit. And people don't need a critic to tell them what they like," Cyrus said.

Overnight Cyrus went from playing country music festivals to performing with Lil Nas X at Rolling Loud Festival in Miami, popping on stage with Cardi B and playing on the BET Awards.

"In the summer of 2019, the world needed a song that everybody could sing together," Cyrus said.

About a month after Cyrus' remix of "Old Town Road" came out, he released Snake Doctor Circus, an album recorded in Muscle Shoals, Ala., with Tress, his old friend. Tress said that Cyrus' success came with baggage, whether it was "Achy Breaky Heart" or playing the lovable dad to Miley on screen. Tress was hoping that the album would show a different side of the star that everyone had preconceptions about. But it failed to chart on Billboard's country albums chart.

"Timing was a little bad for our record because it just got tsunami-ed," Tress admitted.

Cyrus doesn't think too much about whether "Old Town Road" will boost his own career.

"I've learned don't look back. The past does not equal the future," Cyrus said. "I've just found a great deal of excitement in where I'm at right now."

Cyrus has weathered the highs and lows of his career because of his persistence and an unwavering belief that God wants him to entertain people. His new EP has a cover of a Neil Diamond song, "I Am ... I Said." It was a Neil Diamond concert that convinced him as a young man to give up his dream of being a Cincinnati Reds baseball player and pursue music instead.

"I felt hands. And they were holding me, saying, 'This is your purpose, Cyrus. You gotta go buy a guitar and start a band,'" he said.

Three decades later, Cyrus said he's happy with what he has been able to achieve, no matter whether he gets awards or recognition.

"Nobody can erase what 'Achy Breaky Heart' did," Cyrus said. "'Old Town Road' speaks for itself."

But now that those gold gramophone trophies have finally arrived, he knows exactly what he's going to do with them.

"I put one to the left of my bed and one to the right and I named them Sheila and Peggy," Cyrus said. "And I sleep in the middle."

Print Headline: One hit no more: Persistence pays off for Billy Ray Cyrus