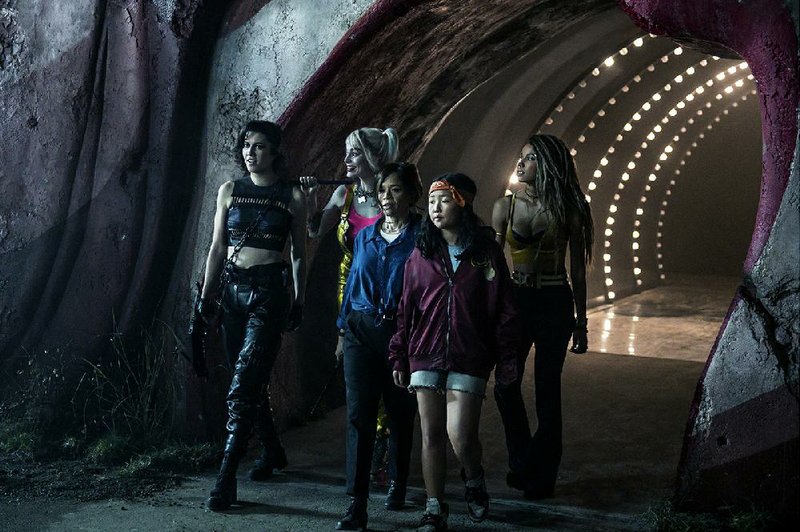 The best thing to come out of 2016's much-derided DC antihero team-up Suicide Squad was Margot Robbie's inspired take on Harley Quinn, the self-proclaimed "Joker's girl" and quirky chaos clown. Robbie's Quinn, with her colorful pigtails and baseball bat, instantly became an icon, a perennial Halloween costume, eclipsing even her lesser half, Jared Leto's heavily tattooed Joker. But enough about him; the Joker is so 2019. 2020 is Harley Quinn's year. And in the wake of her breakup, she's back and better than ever with a brand-new girl gang in the brilliant, breakneck Birds of Prey: And the Fantabulous Emancipation of One Harley Quinn.

Director Cathy Yan soars with her stylish second feature, which is colorful, campy and cheerfully brutal, a perfect reflection of Harley herself. Robbie, as usual, tears into the role with a wide-eyed gusto that is equally childlike and unhinged. With her Betty Boop accent, wacky wardrobe and gymnastic facility with a bat, Harley is one lovable psychopath. It's impossible not to root for her, even as she's reducing chemical factories to clouds of rainbow-colored smoke, gleefully dropping hordes of police officers with shotgun blasts of glitter and demolishing bad guys with roller skate high kicks to the face. Robbie makes Harley a bedeviling, beguiling antiheroine, not just any old crazy ex-girlfriend.

Rating: R, for strong violence and language throughout, and some sexual and drug material.

Birds of Prey is also the cinematic introduction to the other birds in the flock, the beloved comic characters Black Canary (Jurnee Smollett-Bell), styled as a butt-kicking blaxploitation queen, and Huntress (Mary Elizabeth Winstead), a mysterious yet neurotic assassin out for vengeance. Along with renegade cop Renee Montoya (Rosie Perez) and precocious pickpocket Cassandra Cain (Ella Jay Basco), this is Harley's new girl gang, who band together against the sinister Roman Sionis, aka Black Mask (Ewan McGregor). Although Harley typically prefers to commit crime than fight it, for these girls (and that guy), she'll make an exception.

Christina Hodson's script is a madcap, irreverent roller coaster ride, the story relayed in a loopy, looping, nonlinear fashion through Harley's hyperactive storytelling style. She bounces back and forth through time, taking a few tangents to wax poetic about the beauty of a bodega bacon, egg and cheese sandwich (relatable), list each of her enemies and their grievances with her and relish in the memories of some of her best butt-kickings. She clearly sees herself as Gotham's own Atomic Blonde, and the eye-popping fight choreography proves she is. The action sequences are breathtakingly balletic and bruising. If it seems like Harley could take John Wick in a fight, that's because she can: John Wick director Chad Stahelski consulted on some of the fight sequences. Shot by Matthew Libatique, the action is crispy clean among all the sparkles, smoke and decaying carnival rides.

Birds of Prey is a circus for the senses, but the performances give the film its heart and humor. Every performer knows what movie they're in, with Robbie's winking, wild performance creating a safe space for experimentation. The wonderfully powerful Smollett-Bell is a breakout, but McGregor's outlandishly campy turn as the sniveling Sionis is a hoot and a half, easily stealing the show. Yan has delivered a riotous rodeo that is Kill Bill meets Coffy. It's a tribute to the cutest, kookiest clown in the comics, and a perfect distillation of her character: sweet, sour and sassy in all the right ways.