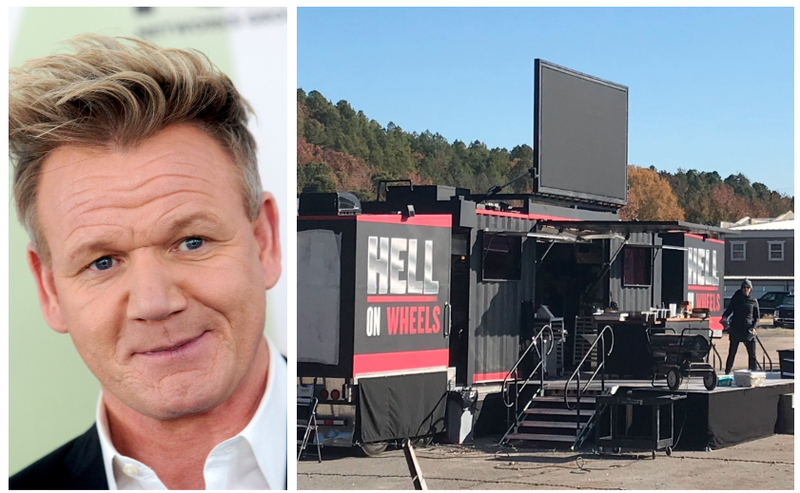 At left, celebrity chef Gordon Ramsay is shown in a file photo. At right, the Hell on Wheels truck from his show "24 Hours to Hell and Back" is parked near South Boulevard in North Little Rock. (Dennis Van Tine/Abaca Press/TNS and Josh Snyder/Arkansas Democrat-Gazette)

Two episodes of Gordon Ramsay’s 24 Hours to Hell and Back featuring Central Arkansas restaurants are set to air later this month, according to Fox Entertainment.

Publicity assistant Kylie Elliot said the episodes, one featuring Bear’s Den Pizza in Conway and one featuring South Boulevard in North Little Rock, are set to air back-to-back from 7 p.m. to 9 p.m. Feb. 25 on Fox.

They are planned to be the third season’s final episodes.

Ramsay’s Hell on Wheels truck — a vehicle that serves as a temporary kitchen while a "struggling restaurant" is revamped — was spotted steps away from the University of Central Arkansas campus in November.

Suspicion arose that Bear’s Den Pizza was set to be featured when it temporarily closed and reopened with a revamped, artisanal menu and trendy interior. Owners did not confirm nor deny they were to be on the show.

[Gallery not showing up above? Click here to view » https://www.arkansasonline.com/1112bearsden/]

South Boulevard appeared to be Ramsay’s next stop when the Hell on Wheels truck was seen parked along Counts Massie Road north of Maumelle Boulevard the same week.

Elliot said the schedule for the episodes to air is subject to change.